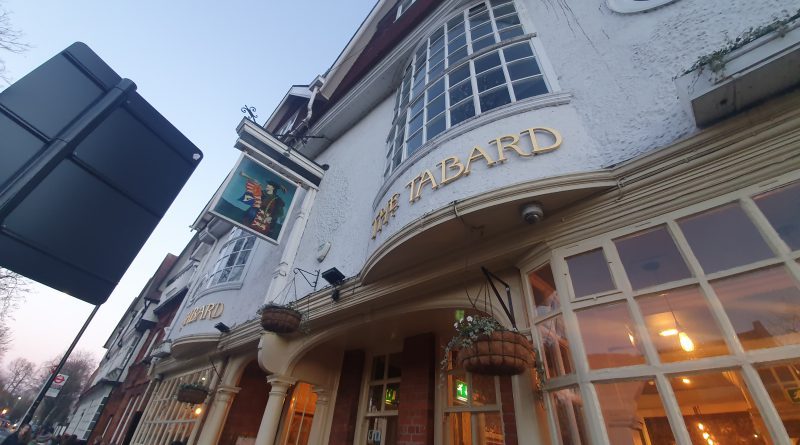 This is a Greene King pub, so I obviously didn’t come here for the beer, but instead because it’s listed in the Good Beer Guide and it was designed by Norman Shaw. There’s also the bonus that this was a building that Nikolaus Pevsner thought was “especially attractive”, so what could Greene King possibly mess up? Firstly, they make no effort to mention the history on the pub’s page on the Greene King web-site, the usual lack of effort they make in so many ways. There’s a corridor type entrance, with doors to the left and right. Food is served throughout the day and there’s a menu board visible on entry, next to the rather nice pillars. CAMRA have some information about the pub’s history on their Historic Interiors pages. That’s the other side of the door that’s on the left in the previous photo. There’s a Wikipedia page about the pub at https://en.wikipedia.org/wiki/The_Tabard,_Chiswick#Pub. And the same door, but my phone’s wide angle makes it look much wider. The central bar is visible at the rear, just behind my well travelled bag. The atmosphere was a bit excitable for my liking with staff members singing away, but there’s nothing wrong with that as this is a pub which is keen on its music. The beer was half a pint of the XX Mild from Greene King, which was served too warm, I think because of the temperature of the glass. The beer was adequate, about as good as Greene King manage to churn out. The service was verging on rude at first with staff members just standing about talking, but the staff member who served me was friendly and helpful enough.

This building is exceptionally interesting and there’s even a theatre on the first floor. I can understand why it’s in the Good Beer Guide as it’s an historic pub and that makes it worth visiting in itself. There were five different real ales available, mostly generic and none that particularly interested me. However, it’s nice to see a mild, so I’ll credit that with being the most exciting option that they had.

The reviews of the pub on-line are a little below average, mostly about unfriendly staff and food that didn’t surprise and delight. That probably seems to fairly sum the pub up, but they do respond professionally to all reviews that I’ve seen, so it’s positive that they’re keen to engage. I can’t help but feel that this pub would be lifted if it wasn’t operated by Greene King though, this is something that Fullers or Nicholsons would handle a lot better, but ideally it could perhaps do with an independent operator.