There are now two Mikkeller bars in London, there’s one in Shoreditch, and there’s now this one at Exmouth Market (named after the Exmouth Arms Pub) which isn’t too far from King’s Cross. This visit is from early November, when a few of us gathered here before we went to meet Scott at King’s Cross railway station, which was very kind of us to meet him off his train. Mikkeller was founded in 2006 and it now has something of a global reputation, once a cuckoo brewery which brewed wherever it could, but now with its own locations which include this bar. The beer selection is chalked up behind the bar, but they’ve also got it listed on Untappd as well which is handy. They do have beers from other breweries, but they inevitably have a focus on the beers that they’ve brewed themselves. It’s inevitably all very on-trend, not just the beer selection, but also the location and the service style. I had absolutely no complaints about the balance of the beer selection either, there was an excellent range of different styles available. The food options at the bar, and the company said when opening that:

I liked the menu, which was quite simple, but had some interesting options on it, including the ‘Ndjua Scotch Egg and the Nordic Summer Salad, a very firm nod towards the origins of the brewery. Decent mix of vegetarian and meat options as well, it’s actually quite a tempting little selection. I had three one thirds here, with all the drinks being brewed by Mikkeller. I went for the Can’t Say No 2 U (a stout), the Heliosphere (an IPA) and the Parasol Paradiso (a fruited sour). That last drink, and the lighter coloured one in the photos above, was beautifully decadent, a nicely balanced sour with strong flavours of mango and passion-fruit. The drinks were all served perfectly, in smart little branded glasses and everything was at the appropriate slightly chilled temperature.

The venue was relatively busy, but seemed clean and organised. The service was attentive and polite, with the bar staff being knowledgeable about the beer options. If I’m being overly critical, the noise volume was a little higher than ideal, but it’s a busy bar in London and so perhaps that’s not an entire surprise (although Goose Island have better acoustics as far as I’m concerned). The on-line reviews are nearly all positive and glowing, which isn’t unexpected, and I’d quite happily return here and recommend it to others. All really rather lovely. 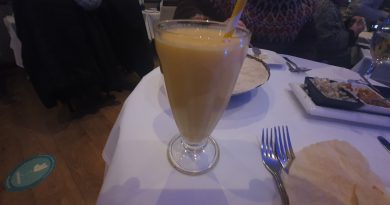