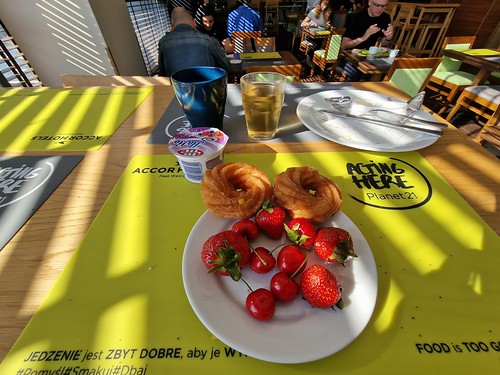 My second morning at the Mercure Warsaw Airport hotel and I thought that I’d investigate the fruit section of the breakfast buffet, although I thought I’d better counterbalance that by popping to the pastry section as well. The Polish grow a lot of strawberries, for a period in the summer they seem to be everywhere. These breakfasts cost under £5 as well, very cost effective. As an aside, I’ve cut down to two meals per day in Poland, a large breakfast and one other meal during the day is sufficient even for me. I’ll report back as to whether that helps me lose any weight on this trip. 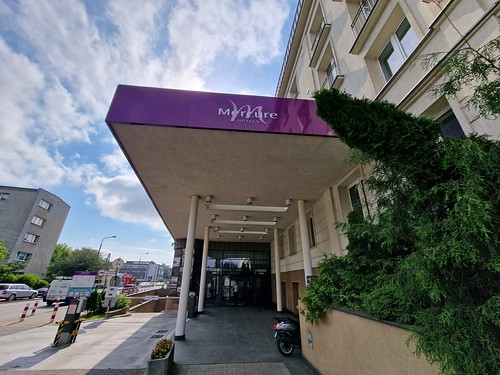 Waving goodbye to one of the best Accor hotels in the city, near to the airport and only a twenty minute tram journey to the city centre. 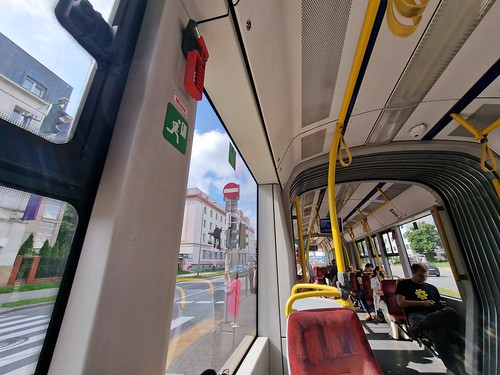 The tram stop is located just outside the hotel as well, making it all very accessible. And cheap, I mention frequently just how cheap Polish public transport is, but it’s about 70p for a single ticket. 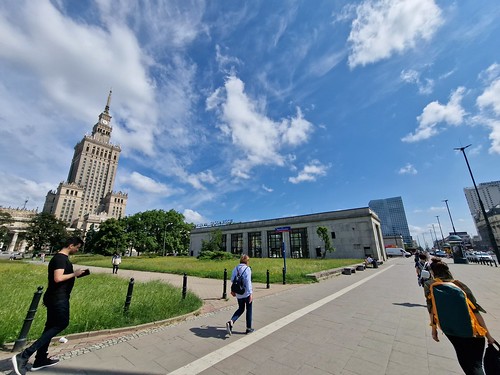 As I was early (again), I thought I’d walk the final section of the way to Warszawa Śródmieście station, even though the tram went by it. I nearly got heatstroke though it was so hot. That was me pre-annoyed for the day. 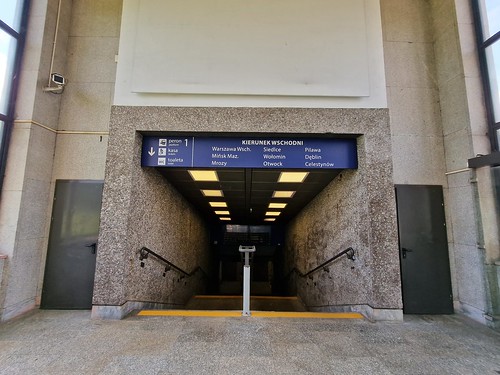 My destination was Siedlce, so I appreciated the clear signage. 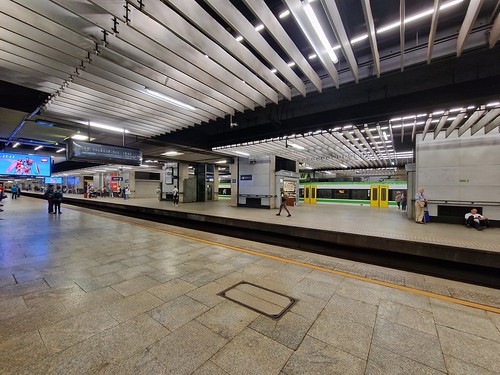 It’s a slightly different set-up in terms of platforms, as it’s single track and you can access the train from both sides. Back in the day, passengers got out one side and boarded on another, which was enforced until the 1980s. They don’t bother enforcing it now, it’s not really necessary either. 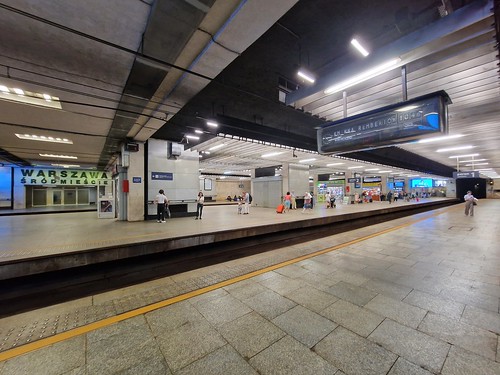 It’s all a little old-fashioned, the signage could do with some modernisation. This railway station was built between 1955 and 1963 and is connected to Warszawa Centralna station. As a practical piece of information, there’s also a ticket office, although I bought my ticket on-line. It cost just under £5 to get to Sieldce and I get a QR code that I can show on my phone, which the guard scans on the train. 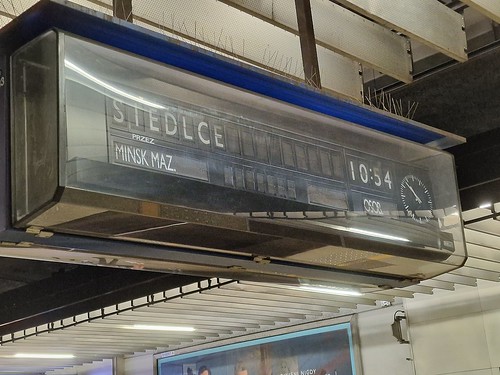 It’s always a relief when the signage matches what I’m expecting it to say. Incidentally, the train’s final destination was Mińsk Mazowiecki, not Minsk in Belarus. 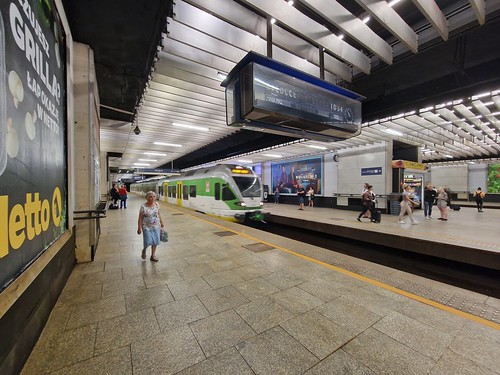 Here’s the train sweeping in, operated by Koleje Mazowieckie, or the Masovian Railways. It’s the regional rail company, owned by local Government, formerly part of the national PKP network. It’s a comfortable and well managed service, it always seems reliable. 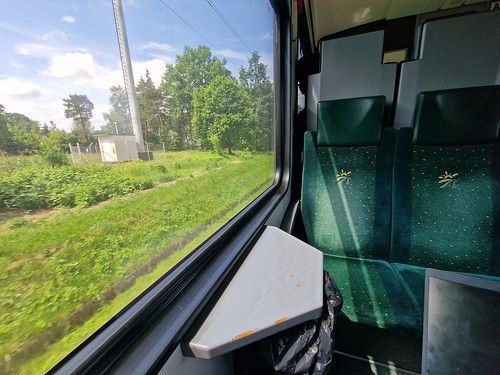 This was a regional train and so I didn’t need to look for a reserved seat, which, to be honest, is normally a bit of a faff, I prefer being able to sit anywhere. There were plenty of seats available and so all was well. One other thing about these trains is they have little bin bags at every block of four seats, with the trains seeming to always be free from litter. The Polish network also doesn’t have barriers to enter railway stations, they just have guards who actually check tickets, with large fines for anyone who is found to be travelling without a ticket. I’ve wondered before if it would be easier to have that system in the UK, the cost of installing barriers and keeping staff by them isn’t cheap. I can’t recall seeing someone on a Polish train without a ticket, I’m not sure there’s much fare avoidance. 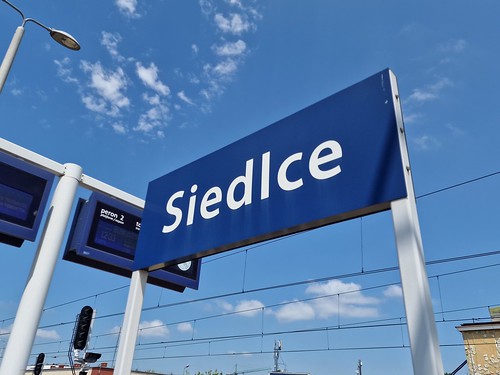 And I arrived safely! I’m going to cover the entirety of my three-night stay in Siedlce in one riveting post (readers should brace themselves for that excitement), so that’s as far as I’ll drivel on for the moment. 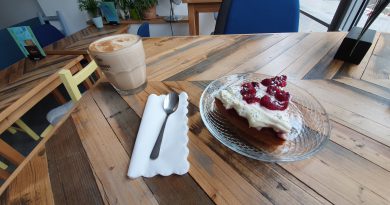 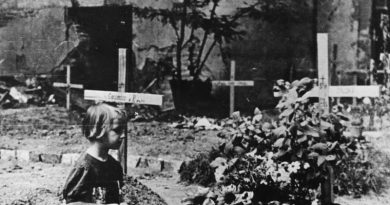