This is the evening flight from Luxembourg to Heathrow T3 as the earlier one had gone tech. The forlorn and lost looking aircraft can be seen towards the back on the tarmac above, with the nice and shiny new aircraft waiting at the gate. Well, relatively shiny.

The aircraft was an A320 with the registration G-EUYC, the same aircraft that I was on when I flew out to Luxembourg last week. I arrived a little early at the gate, which was the quietest that I’ve ever seen at Luxembourg. In terms of boarding, this was a bit of a mess and the staff didn’t make any audible announcements about who was supposed to be boarding when. This meant that people were queueing up in the wrong place and blocking the priority lines, although there were no particular delays.

The crew from the aborted earlier flight were also no doubt keen to get home and they were seated in Club Europe. One of them said to their colleagues that they thought they should be professional and hang back for other customers to board first, although the others collectively agreed that they didn’t like that idea. I boarded early and so the flight looks quite quiet from the above photo, but the aircraft soon filled up because of the delayed earlier flight. The captain apologised for the problems with the morning’s cancelled flight and the rest of the announcements were also professional and helpful. BA’s communications had been good all day and I didn’t hear any customer complain about the situation. I don’t know if the engineers from Heathrow had arrived on the inbound flight to Luxembourg, but work was starting on the slightly stranded BA aircraft. Waiting to leave Luxembourg airport. The crew on board seemed efficient, although they didn’t manage to complete the buy on board trolley service, a situation caused by BA’s policy rather than a lack of ability from the crew. There’s been great play made by BA about the 12 different covers they have this month on the new in-flight magazine. It’s fortunate that I hadn’t got myself over-excited about this, since the aircraft didn’t have any in-flight magazines. All in all, I thought that BA managed the problems delay well. I got to sit in the lounge for eight hours (in addition to the two hours before my first flight) and the rebooking process was simple and easy. I was given a window seat and was able to confirm everything via the app, so the technology worked well. Another customer told me that they had gone into Luxembourg for the day, but I had rather got myself settled in at the airport and decided against that idea.

But, that’s my first flight which has been cancelled due to technical issues, so I’ll probably remember it for many years to come. Although goodness knows why, I’m sure there are better things to remember. 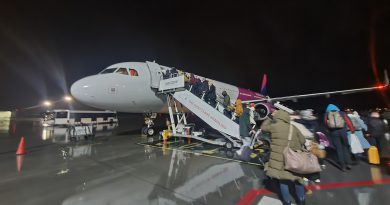