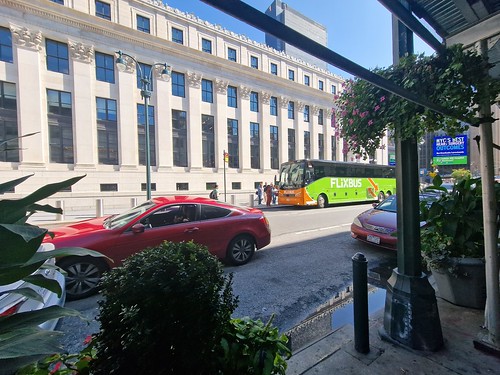 Oh good, they’ve expanded to the United States now….. I’ve had mixed journeys with Flixbus, mostly poor, and it feels a shame that they haven’t fixed a lot of the problems with their European operations before starting on the United States. I saw their bus terminal in the city, which is effectively a small car park. There’s a sign saying “if you’re early, don’t stay here, go and stand by the blue wall” as if passengers are some sort of sheep that needed to be herded into standing in the corner. There are no facilities such as seats (let alone toilets or something similar) by the wall, it’s all part of their low-cost operation.

I think this article at https://farawayplaces.co/flixbus-usa-review/ on Flixbus US seems reasonable, the booking of a ticket can be cheap, but the operation is hugely variable depending on who they’ve got the management arrangement with. It’s a risky operation getting a Flixbus, although they’re a bit cheaper than Amtrak. I’m writing this in Richmond, Virginia, and the bus would have been $40 or so, which is around what I paid for the Amtrak service. Strangely, because American rail takes so long, it would have been quicker to get the bus, but I enjoyed my comfortable rail journey. Oh, and their silly $4 ticket fee annoys me, it would be much more honest to just add it to the ticket price.