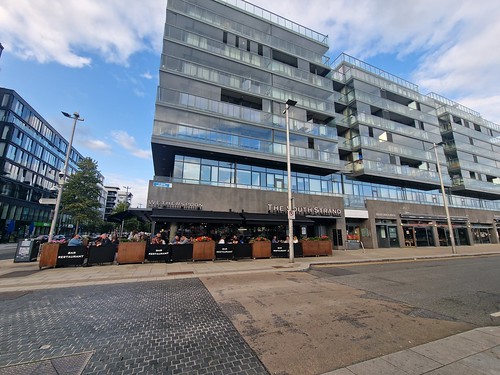 So I went to Dublin and went to two JD Wetherspoon outlets? Well, yes, although there’s another non JDW one to come, but I’d better add here that I’ve been to Dublin many times and visited all of what I consider to be the traditional, interesting and craft beer venues. I’m intrigued to see how JD Wetherspoon are developing and this is an outlet which wasn’t open when Liam and I visited the city a few months ago.

South Strand is another huge investment by JD Wetherspoon in the European Union, I’m impressed, a big vote of confidence from Tim Martin. Although I’m getting political, so I must stop. The pub is located at Hanover Quay and they give the history as:

“The south dock was once a large area of ‘marshland sprinkled with an occasional apple tree’. On one of the earliest maps (1673) of the city of Dublin, by Bernard de Gomme, there are no buildings marked on the south side of the River Liffey. This marshy riverside area is named on Gomme’s map as ‘South Strand’. He noted that it was ‘overflowed by the high tide, with up to five feet of water at neap tide, dry at half tide and dry enough at low tide to walk across the sand’.”

Unlike their conversion of Keavan’s Port, this building was already in use as a restaurant, having been known as the HQ Bar and Restaurant. 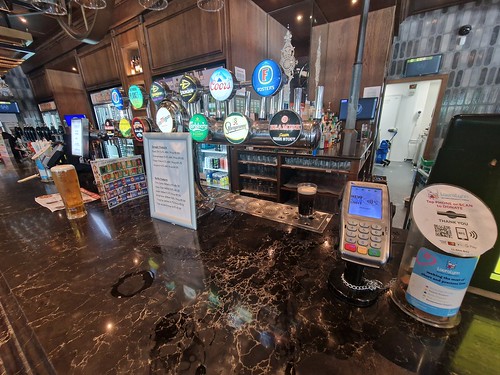 There’s my Beamish resting on the counter, a drink I consider to be better than Guinness. But, best not start a dispute about that, they’re both lovely drinks. It’s a large building, with plenty of external seating and another large seating area downstairs, with a map and compass being recommended to find the toilets. 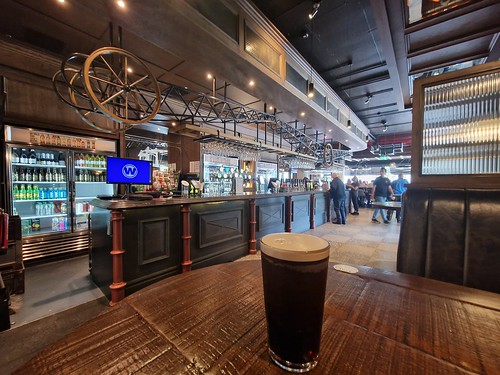 I got a seat near the bar and was I felt very productive despite feeling slightly sleepy. There were plenty of power points dotted around and two kids storming about the place that the staff did well not to trip over. I’ve been a slight idiot (again) as I forgot that Ireland has the same power point holes (or whatever the technical term is) as the UK, and so I’ll be traipsing around with an EU adapter for a month now. Incidentally, someone came over to me and left his phone charging saying that he wanted to go drinking outside and needed it charged. So, not for the first time, I became a guardian of someone else’s phone.

Anyway, I liked this pub, although a few people in reviews have complained that there’s no music. All I can note is thank goodness for that, a little bastion of peace and quiet. It is of course also cheap and whether or not that’s what is attracting the locals, it was very busy.