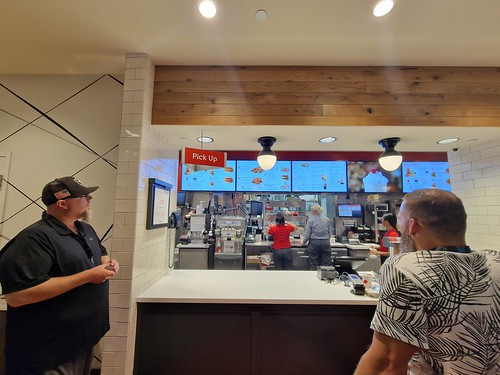 In my never-ending quest to check the quality of fast food outlets in the United States, I was reminded that I don’t think I’ve ever been to Chick-Fil-A. This is their outlet within the Golden Corral casino in downtown Las Vegas, all clean and tidy with quite a significant queue. 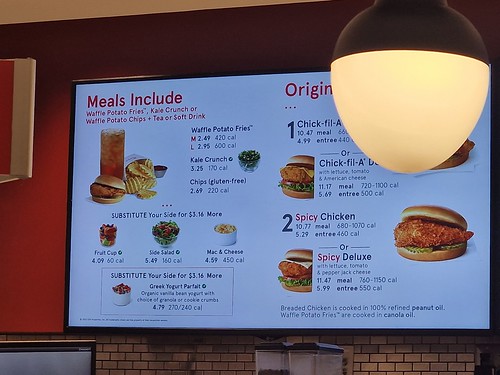 I didn’t feel the need to have a drink given I’d just been given a free beer, not was I tempted by the kale crunch. 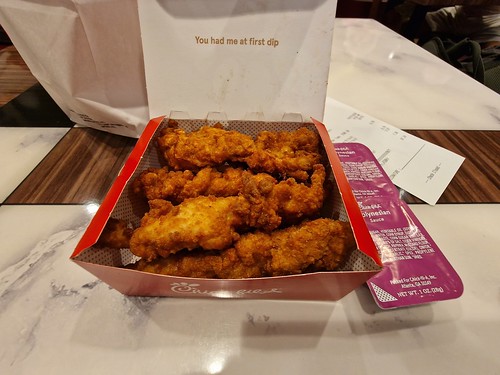 Service was fast and efficient despite the long line, with the staff member merrily calling customers forwards and making time to build up something of a rapport with them. It’s not easy trying to ask everyone a question such as “how has your day been?” or “anything planned for the rest of the day?” whilst trying to sound interested and also not faff around so the queue lengthens. I thought that they all did very well as young Mr Grace might say in Are You Being Served?

The service at the till was prompt, although the wait for the meal was a bit excessive for a fast food venue. I think I, and someone else who I was talking to (well, complaining with), waited for 12 minutes for these Chick-fil-A Chick-n-Strips. We weren’t the only ones muttering, the server shouted through to the kitchen on numerous occasions that they were taking far too long with these. But, that meant they were freshly cooked and I wasn’t in a rush. I must have received about six apologies from the staff member about the wait, so I felt it was impossible to be annoyed since they were doing their best.

There were a couple of free tables, so I seated myself ready to see if I’d be surprised and delighted. And, I was. Tender and moist chicken, with a crunchy exterior with the strips being cooked in peanut oil. The dip provided was the Polynesian Sauce, which I had to Google and it’s made up for this chain, but it’s something like a cross between BBQ sauce and sweet & sour sauce. It was as decadent as the chicken, this is of a quality that I’m not sure KFC has ever reached.

The reviews for this outlet are relatively high, although I found it odd that they’re not using contactless payments. Every customer was having to sign a printed receipt and I’m not sure whether this is location specific or just the brand standard. Anyway,  it could be said this is an excessive blog post for four chicken strips, but they were suitably divine. I can see why this chain is becoming so popular in the United States and I’m sure that I might be popping back to have a little examination of another part of their menu.