Whilst meandering around the area, I noticed that this JD Wetherspoon outlet was listed in the Good Beer Guide, so I thought it sensible to pop in quickly. If I’m being honest the pub looked a complete dump when I entered it in terms of the cleanliness, although in all fairness, by the time I left the staff had cleaned it all so it looked much more presentable. The building has been used as a pub since the middle of the nineteenth century, when it was opened as the Bell Inn, but it closed in the late twentieth century before JD Wetherspoon renovated it.

The real ale selection wasn’t hugely inspiring, there was only one to order really, the Backyard Blonde. And there it is, it’s from The Backyard Brewhouse in nearby Walsall, so credit to JD Wetherspoon for making an effort to purchase from local breweries. There was a slight citrus flavour, nothing exceptional, but still drinkable. I thought I’d get a quick snack whilst I was here, so here’s my standard southern fried chicken wrap option. The service was polite enough, nothing exactly to write home about, but nothing for me to comment negatively about either. And my go to drink when ordering the deli deal, this is the always reliable Brewdog Punk IPA.

I didn’t experience any problems, although the reviews for the pub aren’t as high as they perhaps could be. Mostly about cleanliness, although I was impressed at how the staff had managed to let this be served….. As an aside, located opposite the pub is this former Gaumont cinema, built in 1938, which was meant to be being brought back into usage by the local independent chain Picturedrome Cinemas, but not much seems to have happened yet. Unfortunately, some irresponsible urban explorers have trashed the place over recent years and lots has been stolen, but apparently the renovation will still go ahead. An urban explorer report, which seems to have been from someone responsible, is at https://www.28dayslater.co.uk/threads/the-odeon-cinema-aka-gaumount-wednesbury-march-2014.88794/. I think it’s a different cinema, but there’s an interesting article on Wikipedia about the Wednesbury Unreasonableness.

Anyway, all rather perfectly acceptable, although for a Good Beer Guide listed pub, the beer choice was a little weak. 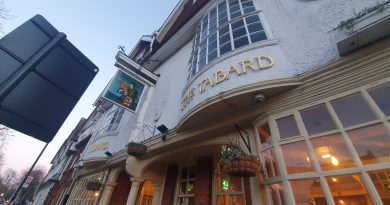