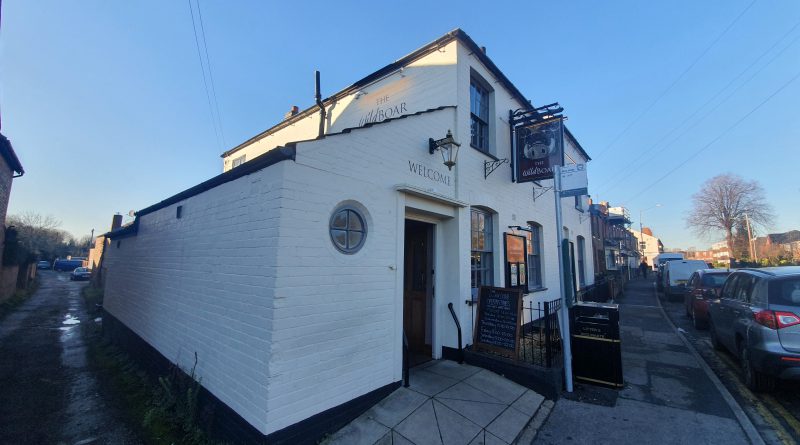 This is another of those pubs that I probably wouldn’t think to visit if it wasn’t listed in the Good Beer Guide, even though it’s only about a two minute walk from Warwick railway station. There’s a large blackboard near the entrance (not the one in the above photo as that’s their bar snacks and wi-fi board) which has the cask and keg options listed on it. I hadn’t realised at the time, but this pub is also the home of the Slaughterhouse Brewery and they had a few beers on that they’d produced. The descriptions on the board for the keg options were minimal, which gave me a slight problem in knowing what to order as I was going to resort to the tactic that my friend Liam has of picking the one with the most interesting name. I mentioned to the staff member that I’d have half a pint of the Wet Leg, even though I wasn’t sure what it was. She was polite, but she didn’t tell me anything more about it, but I like the jeopardy element sometimes so all was well. It transpired that the beer wasn’t listed on Untappd, although it is now since I listed it (apologies to the brewery if they now need to edit what I have typed in). It was a perfectly good hazy session IPA, quite citrusy and very drinkable. The member of staff mentioned that I had been the only customer in so far, and since it was nearly 14:00 and I had only ordered half a pint, I’m sure that they didn’t find this ideal. It’s hard to judge the atmosphere of a pub when I’m the only customer, but I liked it at the staff members were friendly and engaging, it felt a warm and inviting place. My often talked about measure of “would someone new to the area feel welcome here and meet people?” would be met here I think, it’s a very decent pub.

The reviews of the pub are positive, which isn’t really surprising, there was an air of competence about the venue. One happy soul complained that “Got 1 beer and 1 wine £13. Will never go again” but that really needs a little more, such as what beer and wine had they ordered? Yes, that’s a rip off if they got half a pint of IPA and a Blue Nun (not that I’m suggesting that they sell Blue Nun here), but if it’s a pint of decadent beer then they’d have got themselves a bargain.

Anyway, another pub that I was very pleased with and absolutely rightly in the Good Beer Guide. Very nice.