Without giving a long lecture about the history of Poland, the area around Katowice is part of Upper Silesia. Before the First World War, the land was mostly part of Prussia, but that conflict changed everything for this region. The new independent Poland was created in 1918, the Second Polish Republic, and the land borders needed to be defined. This was a tricky situation in Upper Silesia, some people considered themselves as German and some considered themselves as Polish, and, of course, the dividing line was not clear.

The League of Nations were trying to resolve the situation when they lost control and the local Poles rose up in anger on three occasions. In the end, there was only one option, which was to have a vote of the people who lived there, asking do you want to be in Poland or Germany? And the results didn’t provide the clarity that the allied authorities might have hoped for. The town of Katowice voted strongly to be German, but the residents around it wanted to be Polish, with a similar situation in Bytom. Bytom’s division was as clear as mud, 73,567 voted to be German, whilst 73,122 wanted to be Polish.

Katowice became Polish because of the wider region, and they built a huge new Parliament building there which was for a long time the largest building in Poland. Bytom though was given to Germany, because they were able to give some of the territory around it to Poland and the city itself had wanted to become German. Looking back, I don’t know if a further eruption of these borders was inevitable, but of course Hitler’s vision for Europe blew the arrangements apart. In 1939, his armies walked into Poland and he claimed Silesia was once permanently reunited as part of Germany.

Following the end of the Second World War, the then border town of Bytom was given to Poland and it’s no longer anywhere near the German border. I mention all this as the city has had a different twentieth century compared to Katowice, given it was under German control for over two decades. 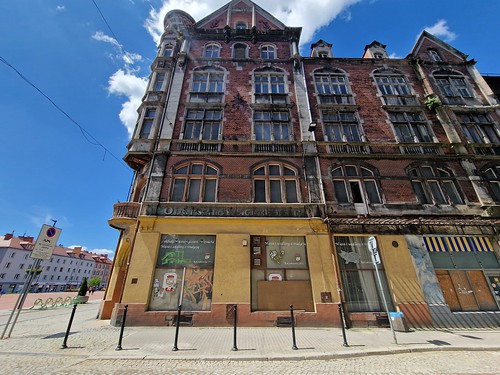 The legacy is still visible, this shopfront still has the pre-war signage from when the city was in Germany. I found this exposed sign fascinating, it does bring the past to life. 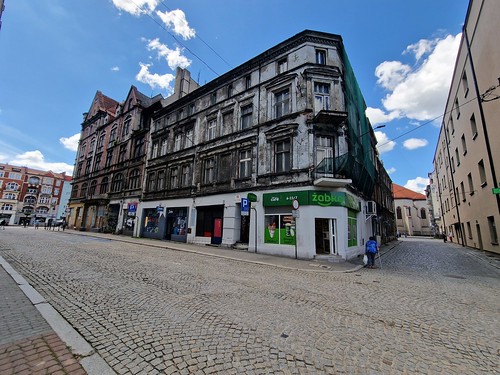 Bytom was not treated well under the communist occupied period following the Second World War, it became a dirty, polluted and heavily industralised area, although the seven coal mines provided a lot of work. Its transformation has been dramatic over the last couple of decades, but there’s plenty to do, as is visible with buildings such as this which are next to the main market square. 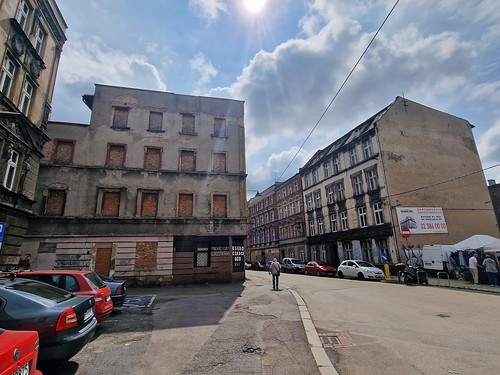 There were literally tens of large buildings in the central area which are derelict, with no obvious signs that they’re going to be redeveloped any time soon. 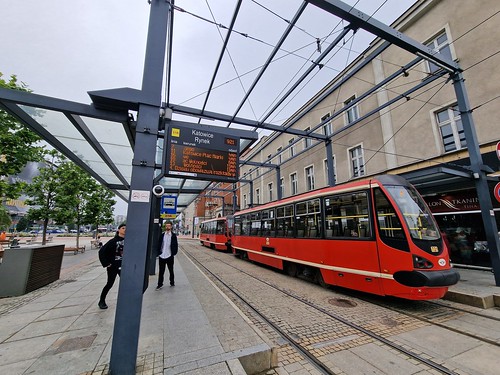 Although I’ve jumped a little ahead with this story, the region has excellent transport links, this is the tram I photographed in Katowice which took me straight to Bytom. A day pass to use the entire network of trams in the region, which is one of the largest networks in Europe, costs under £2. 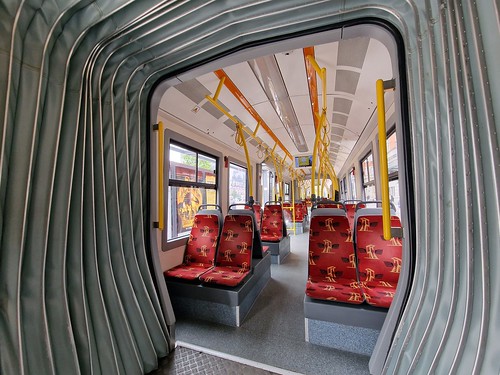 It wasn’t the busiest tram service that I’ve ever been on. And my first impressions of Bytom weren’t great, the tram swept through derelict areas and then when I got off the tram there was a drunk man urinating in the little park area. It’s wrong to judge any location by an initial impression like that, but on this occasion, there didn’t feel the air of confidence that is evident in nearby Katowice. 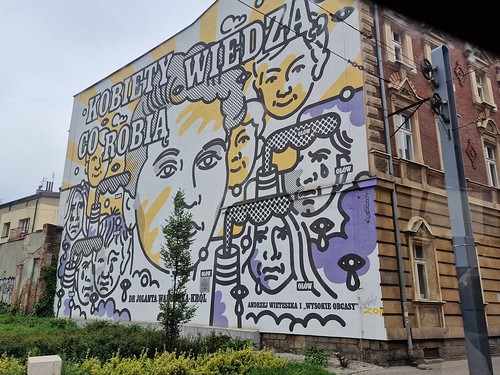 Excuse my mistranslation, but this means something like “women know what they are doing”. 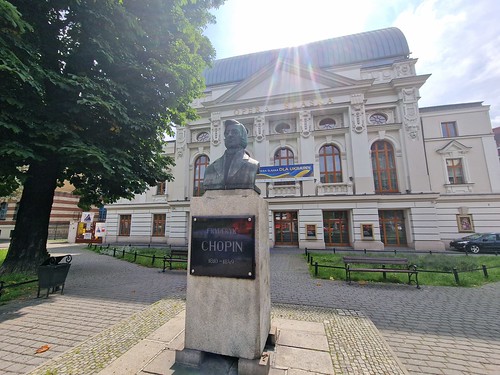 The Chopin monument in front of the opera house and I don’t know when this was put here, but I’m confident it was after the Second World War given his importance to the Polish nation. 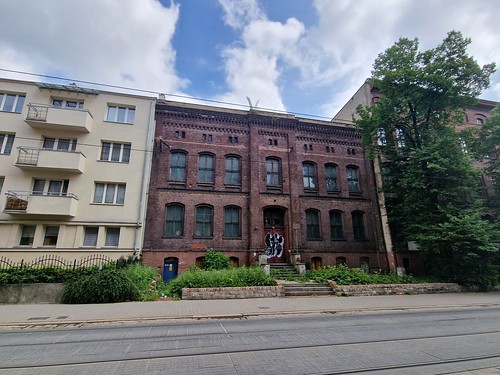 Another derelict building, this one feels very Prussian in design. 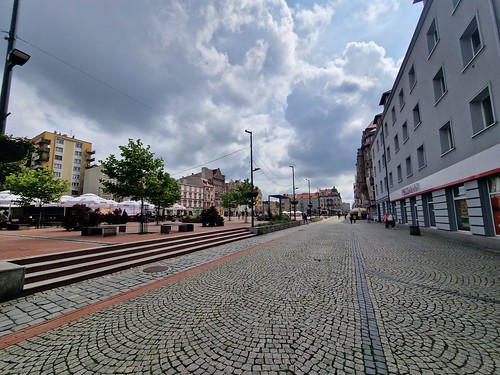 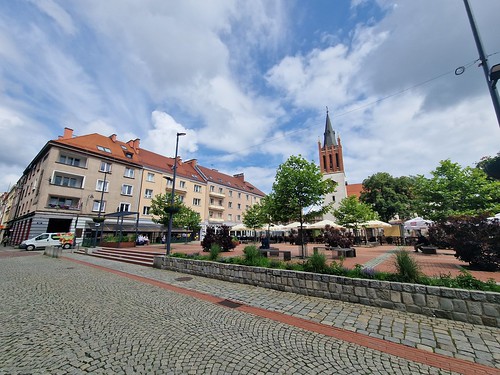 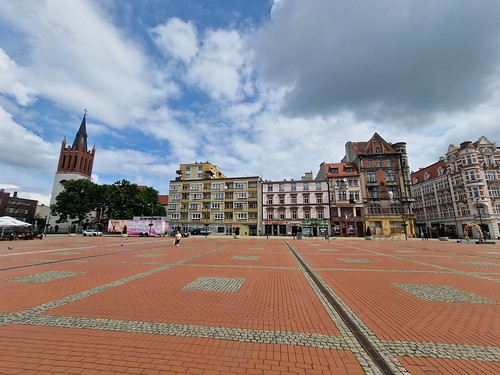 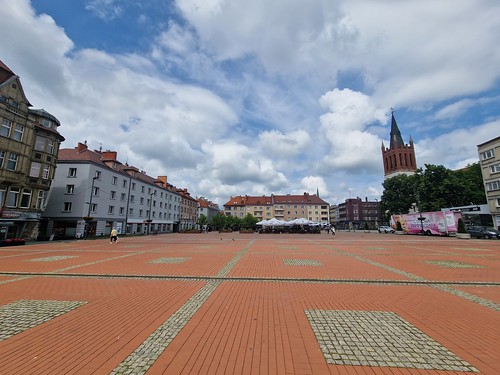 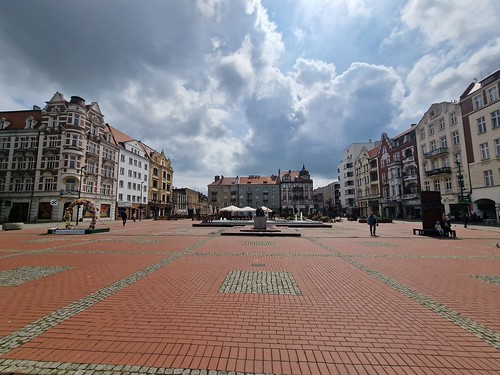 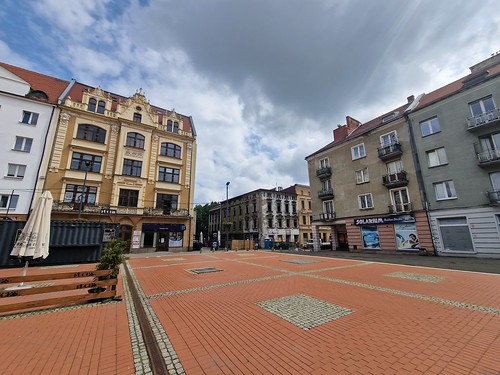 All photos of the main market square, which is huge and has had some work to improve its look, although some buildings looking out onto it are derelict. Some structures are grand Prussian designs, others are more utilitarian post-war structures which were almost just thrown up. 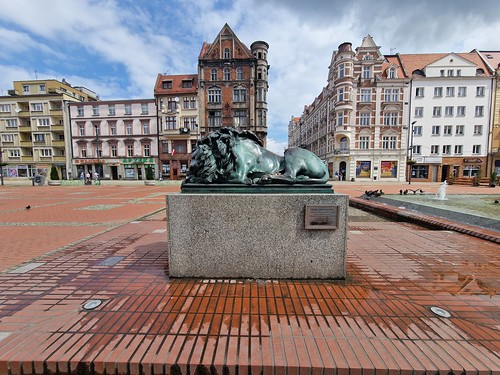 The sleeping lion, which is one of the city’s iconic monuments. It dates from 1873 when it was erected on a plinth to mark those from the local area who lost their lives in the Franco-Prussian War. The plinth was destroyed during the Second World War and somehow the lion was moved to Warsaw Zoo where he sat outside guarding the entrance. In 2008, he was returned to Bytom and there are some photos of the lion on the plinth at https://instytutkorfantego.pl/blog/lew-spiacy-historia-jednego-odlewu/. 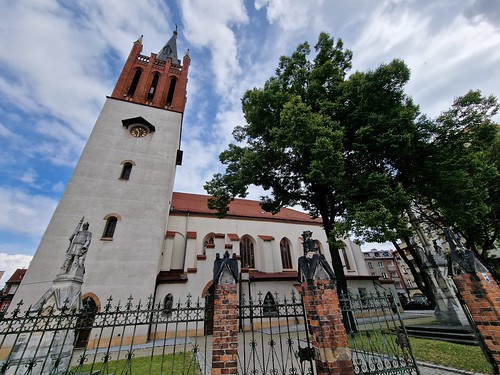 The catholic Church of St. Mary’s. 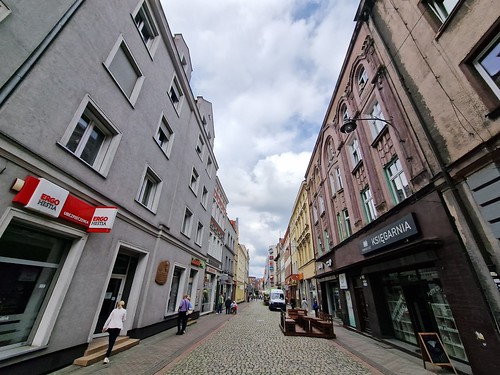 Bytom had a feeling that it was on the up, although there’s quite a lot of up still to go. There isn’t the vibrancy in terms of the number of restaurants, cafes and bars, but there’s an evident cultural base to the city with the opera house and other similar institutions. 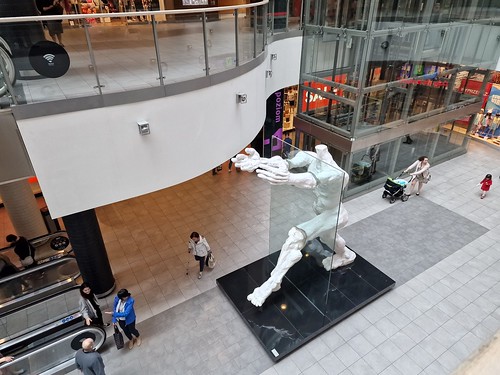 One sign of wealth coming into a city is the opening of a large shopping centre and Bytom has one of those with an interesting sculpture. 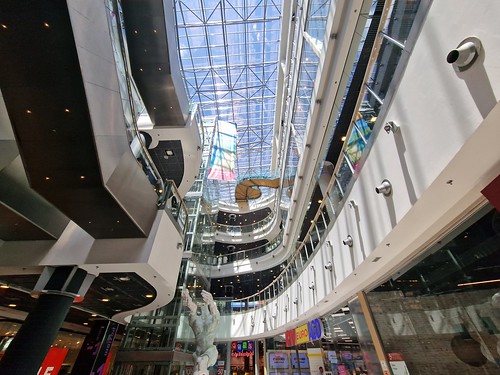 I went to have a look at the sculpture. 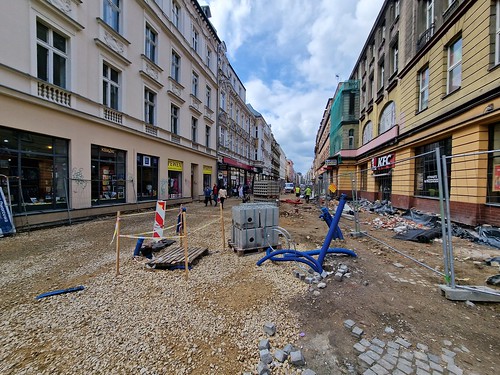 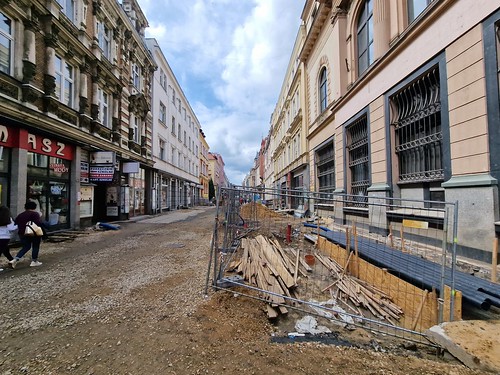 They’ve dug one of the main routes up and are just working around the pedestrians. 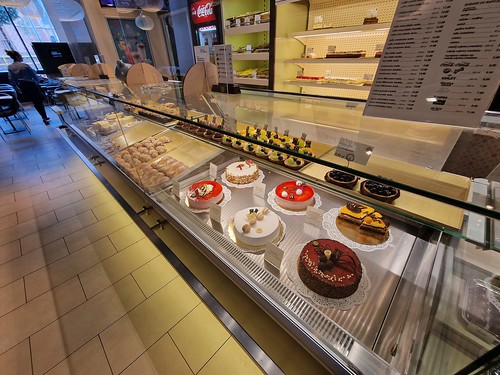 I had to pop into the city’s outlet of Cukiernia Sowa. 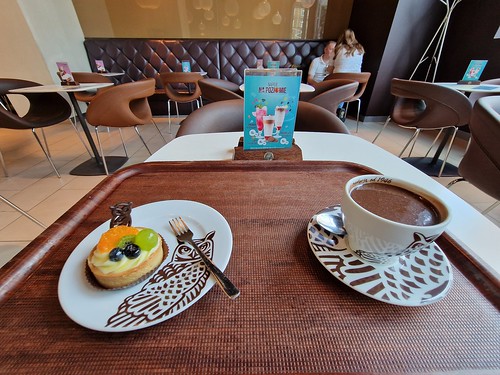 Delicious. That hot chocolate is thick, decadent and bloody lovely. 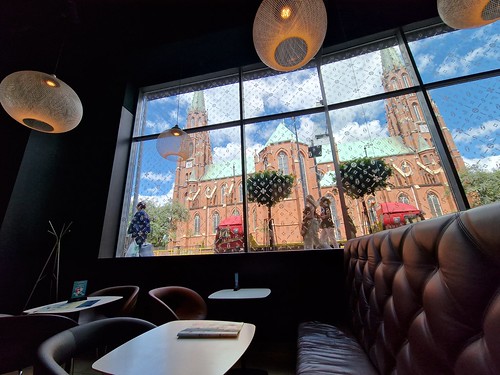 It had an excellent view of Holy Trinity Church as well throughout the window. 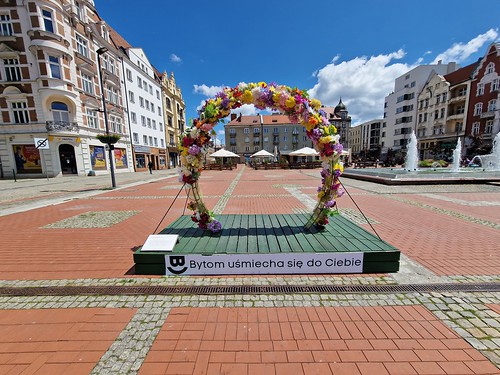 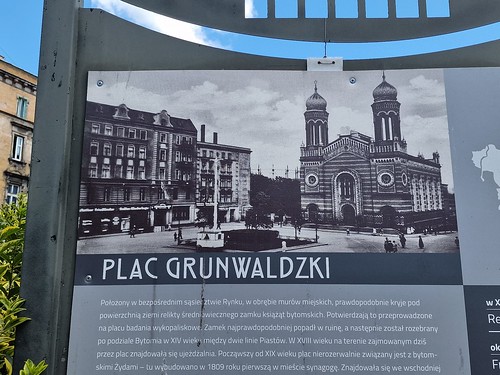 This is Plac Grunwaldzki and that’s the synagogue on the right hand side. It was built in 1869 on the site of a previous synagogue but was destroyed during Kristallnacht on 9 November 1938. This happened just two days after Joseph Goebbels had visited the city calling for hate to be shown to the Jews, with the local Jewish community being forced to watch the destruction of their synagogue. At the time, I imagine the community must have wished they were the other side of the border in Poland, although of course a year later the Germans had marched into Katowice and destroyed the synagogue there as well. 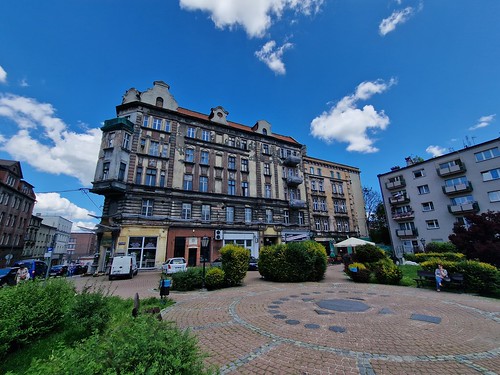 What is haunting is standing in front of the sign with the photo on, seeing that everything is still there other than the synagogue. 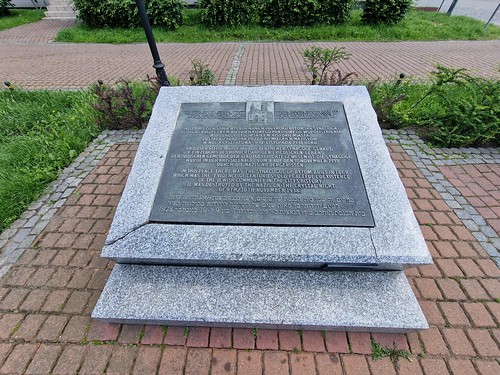 A block of apartment buildings has been built on part of the site now, but this plaque was recently put here to reminder people of the history. They did some archaeological work on the site recently, to pin down the exact dimensions of the synagogue and see what evidence could be found of the older structure. 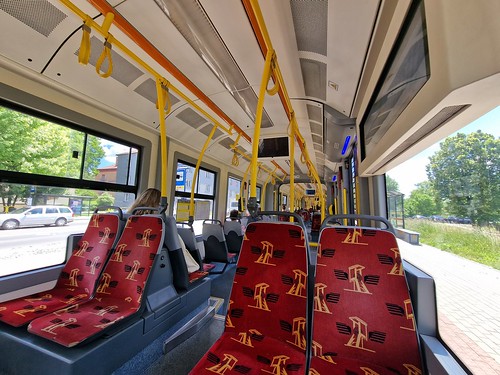 And getting the tram back out, which wasn’t difficult given the excellent public transport system that I’ve already mentioned. Bytom really was an interesting place, it would have been a vibrant Prussian city at the beginning of the twentieth century, with new buildings being constructed and many in the area were becoming wealthy. I can imagine the optimism at that point, which all fell apart during the First World War, then the uncertainty in the years after that conflict. The Germans tried to make their border town wealthy during the inter-war period, but that prosperity collapsed during the Second World War.

The remaining German population was mostly moved out after the Second World War, a mass movement of people which is often overlooked in history, with the Polish population displaced from the eastern side of the country often being moved here. It meant a new city, but the post-war period wasn’t kind to Bytom with the lack of investment. The population started to move away in the 1980s and 1990s, with a return to prosperity only returning relatively recently and there’s still a long way to go. Bearing in mind that the city had a population of 240,000 in 1989 and it’s now 170,000, the size of the challenge is evident.

I’m not sure of the city’s future, it needs more people to move there to see a need to renovate and restore the derelict buildings. It’s not going to be a big tourist attraction, as even the nearby Katowice is often overlooked by visitors to Poland, so it’ll have to find its own economic niche. I get the impression that if I come back to Bytom in 25 years, it’ll be unrecogisable and will feel like a much more modern and vibrant city.