I’ve visited a good number of the craft beer bars in Krakow before, but to my surprise and delight there have been some new openings, or just venues that I haven’t noticed on previous visits. It felt only appropriate to visit some of them during the week that I was in Krakow, to help me cope with the extreme heat. I’d stress that this was across the week, I didn’t go through all this beer and pizza on one day as I can be very responsible when I want to be. 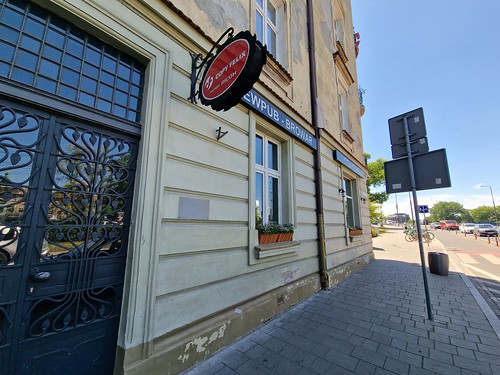 This is Tea Time, a brewpub which specialises in producing cask beer, which is a rare situation in Poland. There’s a lot of British influence here, other than the fighting, so it felt like something different for Krakow. 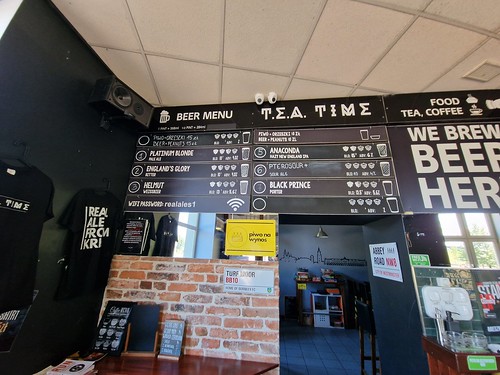 Friendly service, with the ordering process being clear of what they had. I have to confess to preferring keg over cask, but I’m happy with both, and variety is the spice of life and all of that. Beer isn’t meant to be staid and dull, that’s why I don’t drink Heineken other than under extreme duress (by duress I mean it’s free). 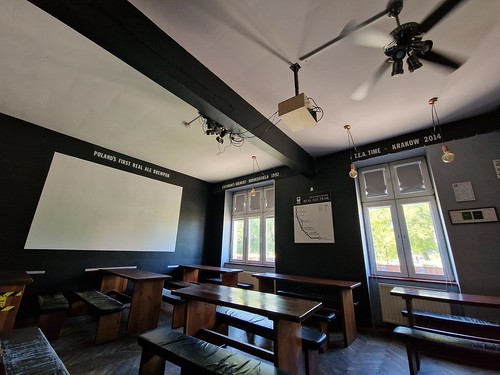 Note the real ale trail on the wall which starts from Burnley, going through Halifax, Huddersfield and London. 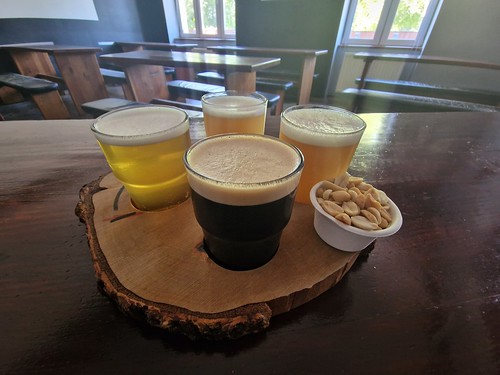 I went for the beer flight thing to try four of the beers, with the peanuts being a free gift from the bar, which was much appreciated. All of the beers were clean tasting, well-kept and at the appropriate temperature. I had gone for the Platinum Blonde, the Helmut, the Anaconda and the Black Prince, with the Anaconda being my favourite, a hazy IPA with a depth of flavour and I thought it was a little unusual as the style felt more like a keg beer. But, delicious. Definitely a recommended venue for the laid-back atmosphere and friendly team members. Oh, it was lovely and cool as well, as I may have mentioned, but it was too hot outside. 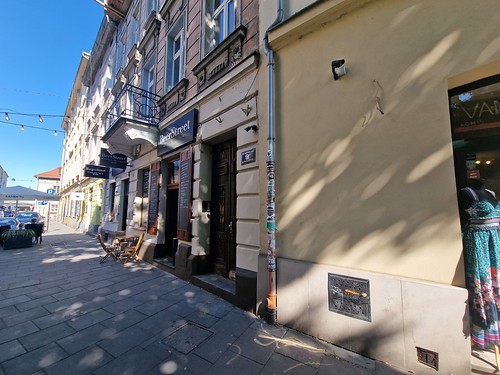 Next was Beer Street, a modern and on-trend feeling venue. The service here was polite, although I was unfortunate their Ontap account was just slightly out of date, and so I ended up confusing everyone from that, but they were helpful and fixed everything. 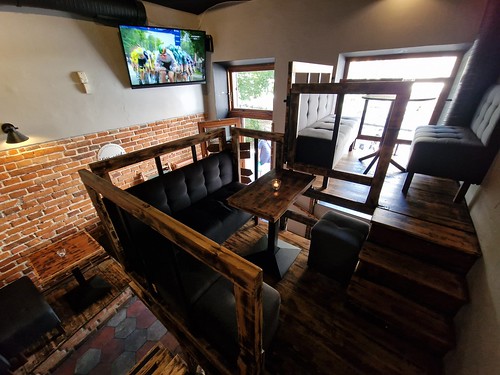 I love this whole arrangement. I’m a loss to the pub industry as if I had a chain of pubs, I’d want some set-ups like this. Obviously I couldn’t build these platforms myself as they’d fall down, but my friend Liam is a civil engineer and is no doubt trained in putting bits of wood together. I’m not sure he’d be very delicate though and he might use a pile driver to get things into place rather than smaller and more subtle tools. 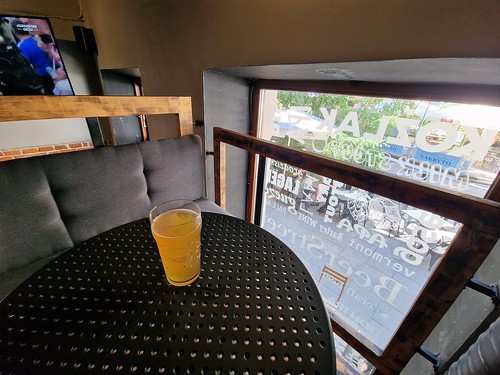 I liked the window view from my perch at the top of the wooden construction and the beer is the Smooth Operator from the ever wonderful Funky Fluid. 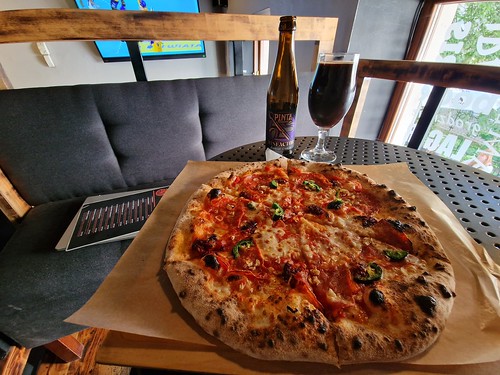 I had wanted the Risfactor Blueberry and Vanilla beer as it was on draft on Ontap, but they said they’d just run out. They had the same beer in a bottle, so that sufficed me, and I accidentally ordered a pizza to go with it. All very delicious. The Risfactor is part of a series of beers from PINTA brewery, who I’ve mentioned on this blog numerous times before as they’re another of my favourites. 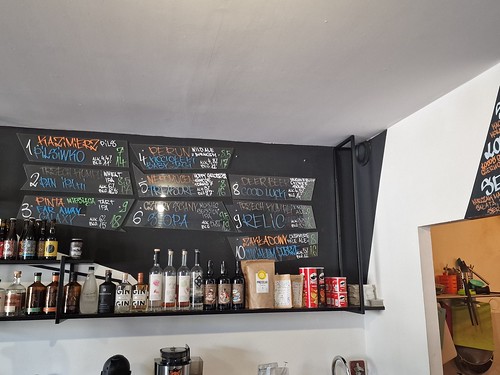 I really liked this little bar, Spoko, which had a lovely relaxed feel to it. Some decent options on that board that seemed tempting and exciting. I had just eaten (although that doesn’t always stop me) but I noted the bagels they served sounded quite tempting. I’d go back here if I return to Krakow, it had a nice vibe to it. 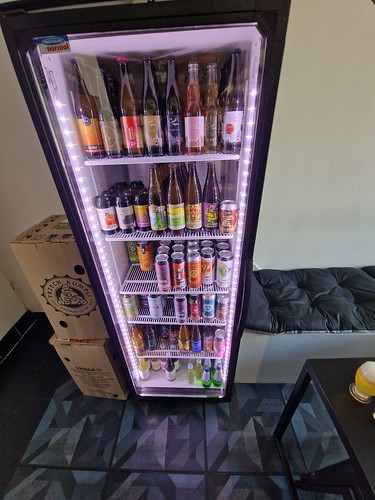 And a selection in the fridges to widen their offerings. 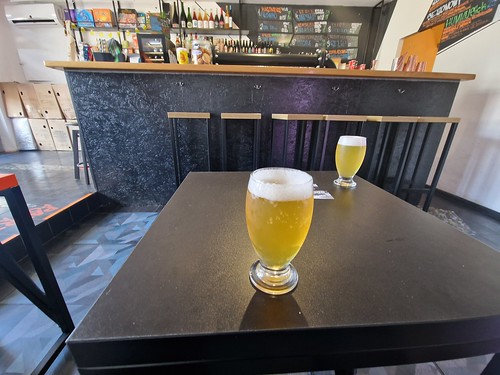 The beer at the front is the Far Away Galaxy, again from PINTA, which is a sour IPA which had no shortage of fruit flavour to it, suitably tart in taste. The other beer is the Treasure from Browar Nepomucen and I’ve had a few of theirs, including some from the excellent Crazy Lines series. This was a good smoked beer, not perhaps quite as powerful as I’d have liked, but still refreshing and delicious. 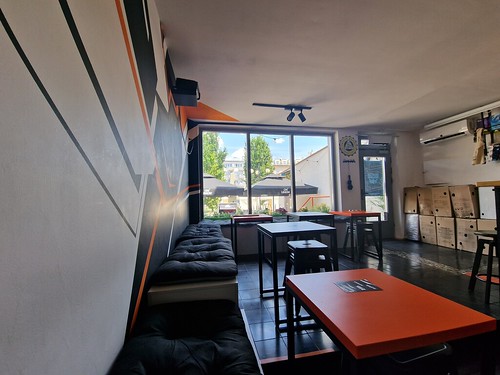 It was busier when I arrived, but I waited for people to go before taking a photo. They were much busier outside, but it was too hot for me to sit in the sun, since I had found a nice cool area inside. 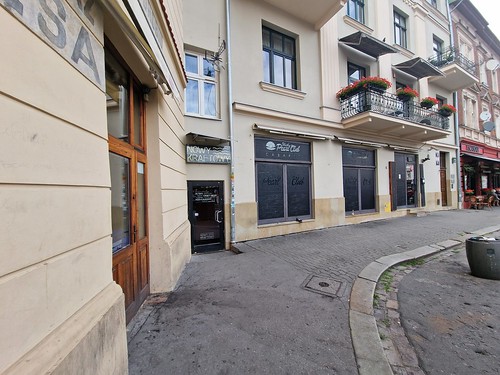 This is Nowy Kraftowy, which is a little more central than the other bars and this was perhaps my favourite of the venues I visited, primarily because of the beer selection. Now, let’s dwell on this for a little while 🙂 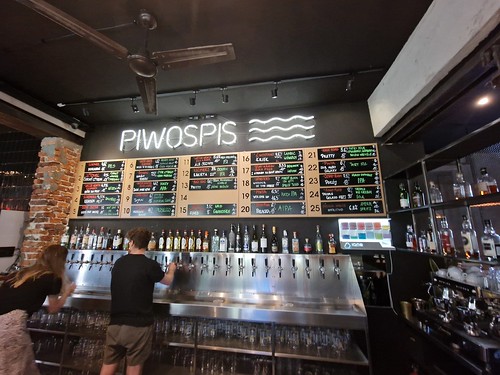 That beer selection is, if I’m being honest, still exciting to me now when writing this. An excellent range of beer styles, different breweries and some innovative options going on there. Poland can do beer, indeed, Poland can do beer very well. 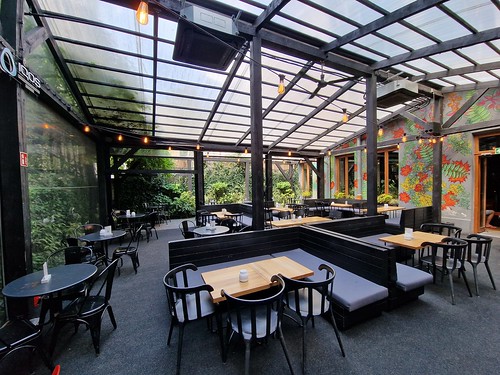 The pub’s garden area, which was quiet and I was able to sit under a fan as it was too hot. 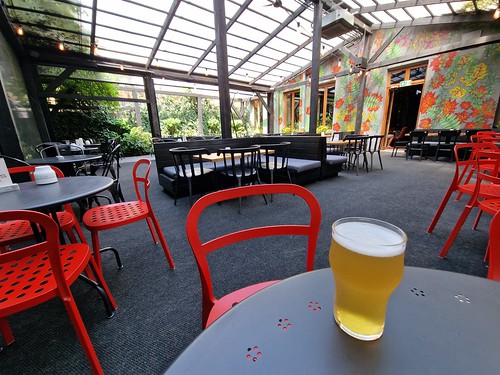 The beer in the photo is the Rakieta from Browar Kazimierz, a perfectly good IPA. But I also had at the same time the Pretty – Peach, Passionfruit, Mango and Creme Brulee from Magic Road, a bloody lovely beer in every sense I can imagine. Every one of the ingredients could be identified by taste, it was refreshing, smooth and quite beautiful. 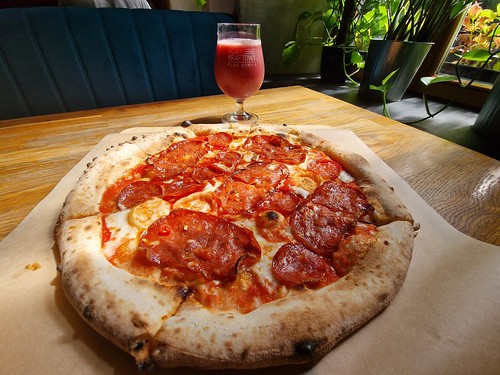 I moved inside at this point as I felt the beer menu needed more investigation and I went for the Triple Gelato PB&J which was another exceptional beer. Flavours of blackberry, peanuts and blackcurrants, smooth with a touch of sourness and no artifical edge. Fruit and peanuts are an odd combination perhaps, although that’s the essence of the peanut butter and jelly it’s named after, but it worked in my opinion. It complemented the pizza which I had again accidentally ordered, as all decent beers do, and this was one of the best meal combinations that I’ve ordered myself in a long time. Thank God for Poland. 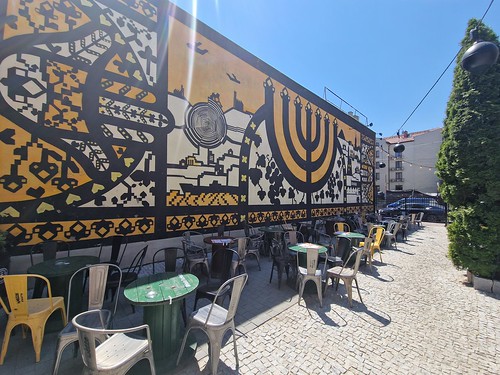 Wezza Krafta is in the Jewish quarter, and is next to a Jewish museum, hence the vibrant wall painting on the side of the building. 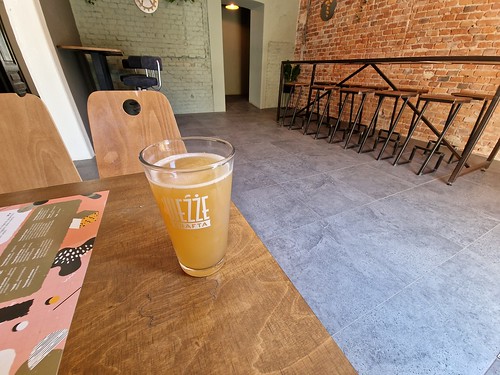 I was far too hot when I arrived and I tried to cool down inside, which took me some time. I went for the Bilberry Giveaway from Magic Road and the Saturator from Ziemia Obiecena, both sours which I enjoyed, although I didn’t feel were exceptional. 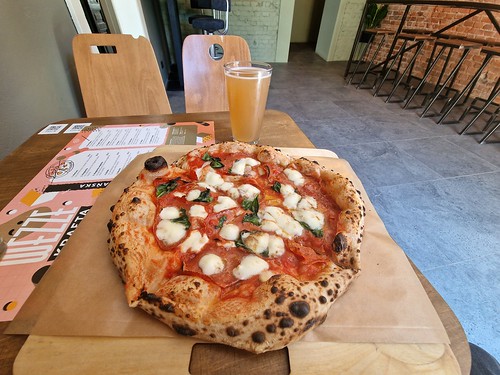 And yet again I accidentally ordered a pizza. It’s important to order these key Polish dishes though to keep them alive. 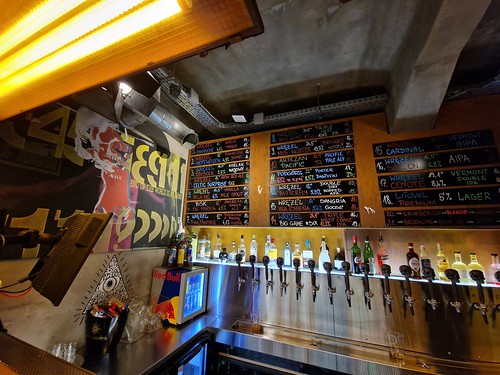 AntyCafe, which is just a short walk from the main market square, which had some interesting options on their board. 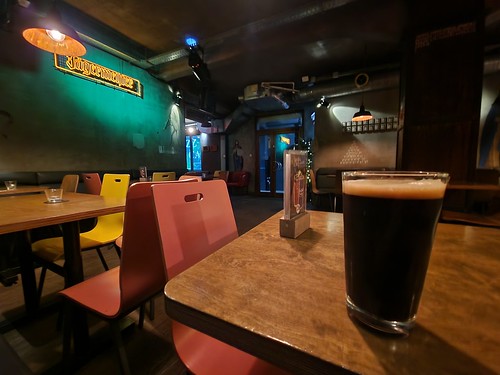 It’s a bit of a music venue, but it was quiet on the evening when I was there, which was fortunate as I’m not one for loud music and raucousness. I couldn’t resist the Milk Me from Browar Wrężel, a 6% milk stout which had the appropriate amount of sweetness for me. The venue was relaxed and calm as well, it had looked quite busy from the outside, but only had a handful of customers when I entered.

Krakow is a decent city for craft beer, there are some new openings on a regular basis and some classics bars which offer a reliable service. Prices are reasonable, often a beer and pizza comes to around £7, not bad for a tourist city. And, yes, I know there’s more to a city’s cuisine than beer and pizza. Although, actually, maybe I don’t….