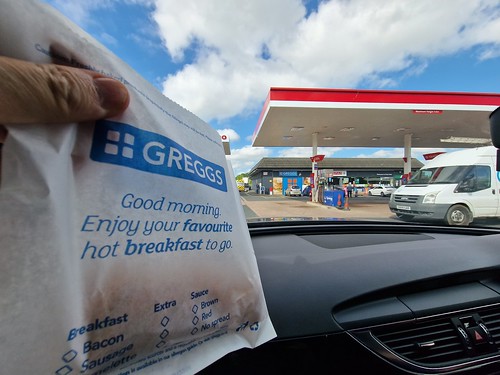 Breakfast on the bright and sunny Saturday was a delicious chicken bake from Greggs. I didn’t want to eat too much as we were bravely going zip-lining later on in the morning, which I had been dreading for the previous two weeks. 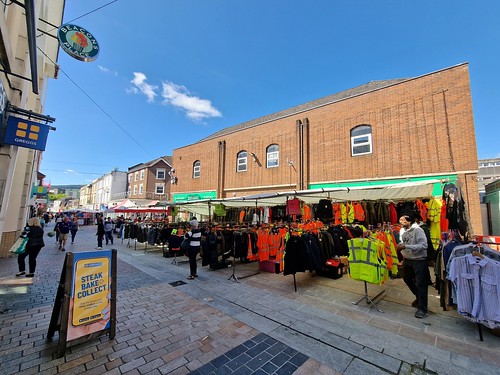 We had an hour to spare before the bravery of the zip-lining, so we popped into Merthyr Tydfil to have a look at the hi-vis clothing market. Stuart from the LDWA has been muttering about when will there be content about Wales. Well, here it is. Soak up this Welsh blog content. 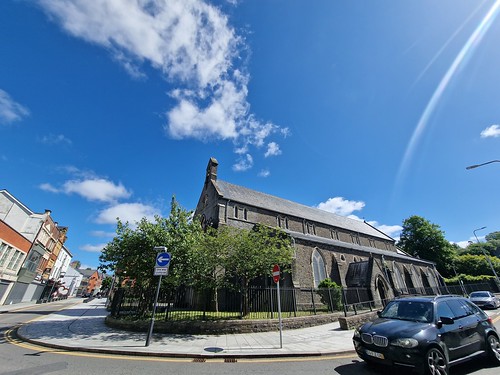 St. David’s which was constructed in 1847 for the increasing size of the English congregation arriving into the town, with St Tydfil’s catering for the Welsh speaking locals. The latter has shut now, so everyone is in this church. 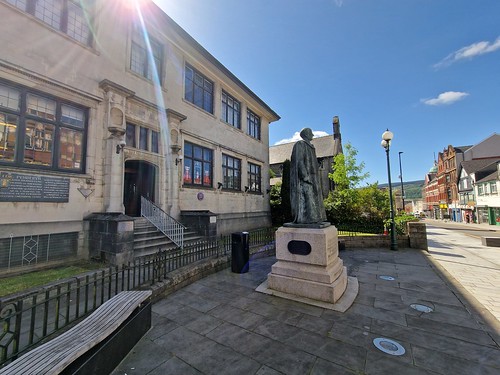 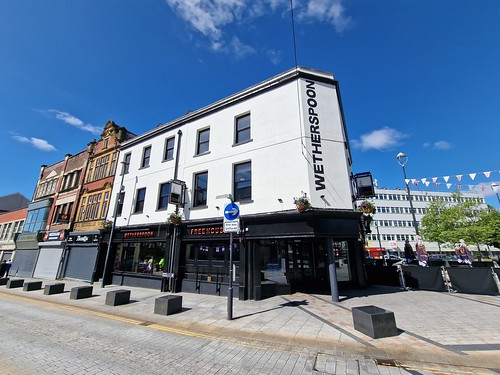 Y Dic Penderyn, the town’s JD Wetherspoons. We popped in to use the facilities and weren’t tempted to stay for various reasons, mainly because I was worried about being ill on this bloody zip-lining that was careering towards us (in terms of time, not literally). 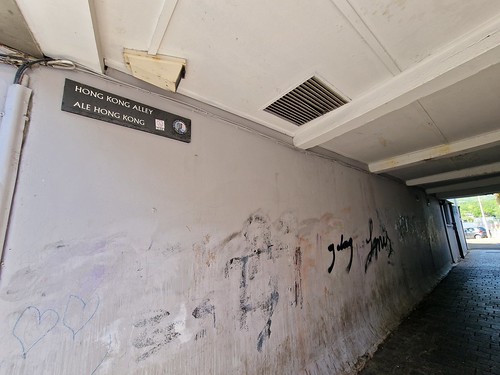 I thought that there would be a fascinating back story to this interestingly named street, but it seems that it was named after a nearby Chinese launderette. Very cultured. 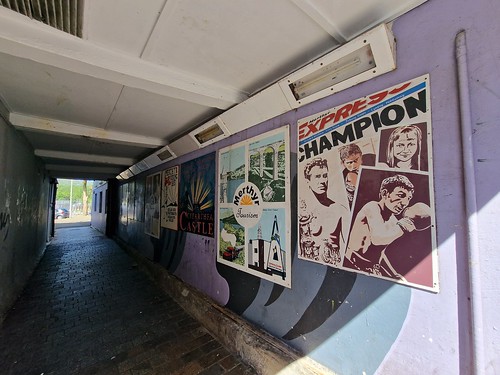 Some random signs about the town’s history, I assume to try and liven up Hong Kong Alley. 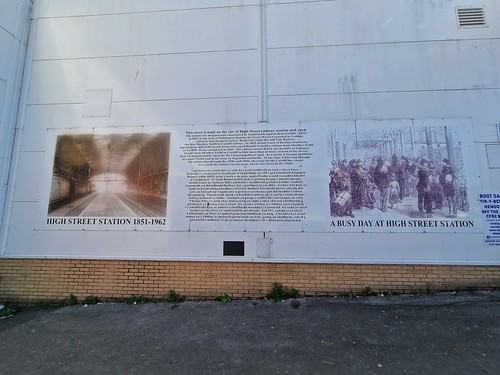 The town could have been rightly proud of the former station building that was here, constructed by Isambard Kingdom Brunel. The sign here notes that it was designed to be like Paddington railway station in London, so this would have been a marvellous building to keep. Instead, the locals ordered it to be demolished and replaced with a Tesco. The railway still serves the town, but what a huge loss of a decent station building. Anyway, entirely underwhelmed with the heritage in the town, although impressed by the hi-vis jackets market, it was time to make the last bit of the driving (specifically Liam doing the driving, I sat there doing the worrying) before the zip-lining. 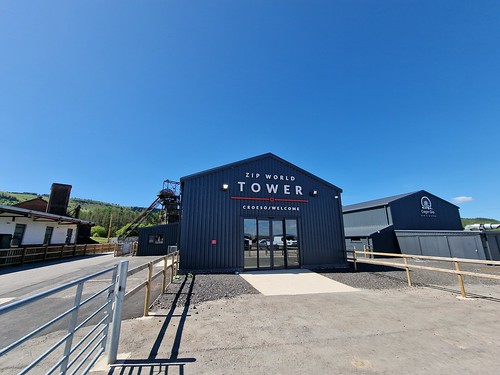 We arrived. I was pre-annoyed about the whole arrangement and blamed Liam for this being his idea. Technically it was my idea, but he had agreed to it, so that’s the same thing. 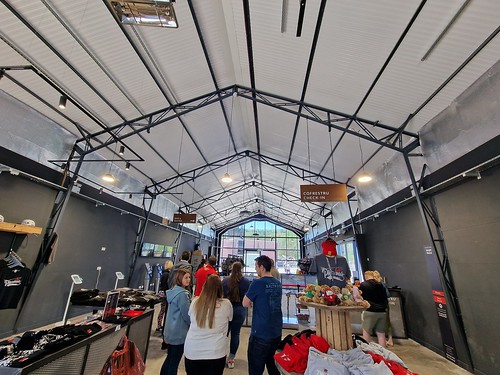 The check-in process, I was too concerned with the situation to concentrate on this. They do weigh you to ensure you’re within the weight limits, which I was pleased to note that we were. Although secretly I had hoped I had put on weight so that I didn’t have to do it. Everyone was very friendly and things seemed calm, with no ambulances on site or anything. 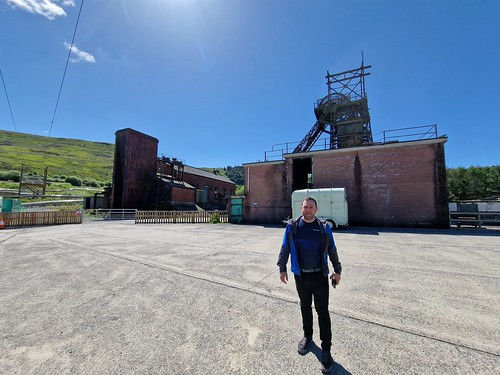 Liam was more excited than I was. I commented that perhaps we should go and find a pub if he was scared. He said he wasn’t. 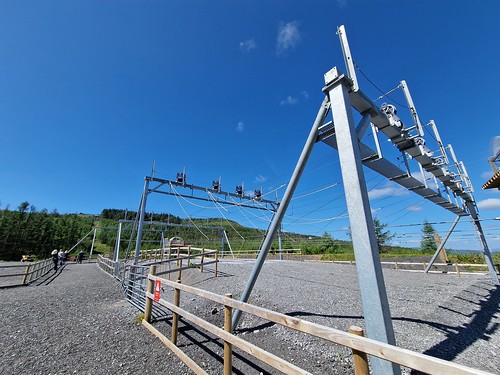 Before we went for our go, we had a quick look at what to expect. This is the end of the zip-lining and this didn’t fill me with confidence as it looked quite fast. 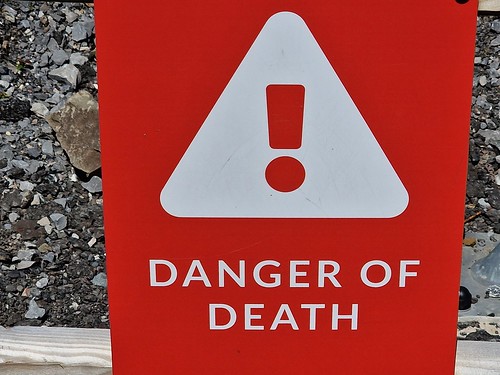 This didn’t entirely help reassure me about the arrangements either if I’m being honest. 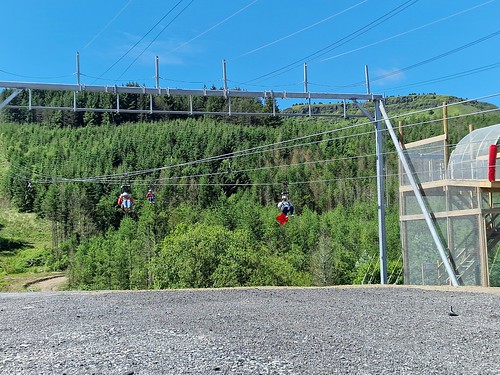 Watching the other victims coming down.

And here there’s a gap in proceedings, as we then went to get kitted up in the heap of equipment needed to do this zip-lining thing. It’s expensive, at £50 per person, but I had some vouchers that I was given that I wanted to use up, so it felt that it was free to me. There are plenty of staff around the place, which was reassuring I suppose, although I was surprised to see the number of people willing to pay this £50 each. I’m not sure that I would have been paying that personally for this ordeal.

There’s not much that we needed to be told by the team members, other than to enjoy the experience, which I didn’t plan to if I’m being honest. We were put into harnesses, as this is the fastest seated zip-line in the world or something, and then given a helmet and goggles. We then shuffled to the van and were driven up the big mountain to the top.

So, we were driven to where it says Zip World Top on the map and there are two zip-lines to go on, the first goes over the lake, then there’s a short walk before going down the second one. I was able to manoeuvre Liam and I near to the front of the queue for our session, although we were still waiting for the group in the previous time slot to finish. I suspect we were waiting there for around ten minutes in line, with the tension increasing as we shuffled nearer to the front. Liam mentioned he was just very slightly scared, but since nothing stresses, worries or frightens him, I doubted he was particularly on edge and I think that was his attempt at being reassuring. I ignored it.

I was waiting for my fear of heights to kick in, but I was reassured that the top of the zip-line platform is not on a sheer edge. That means if it were all to break and I fell off the zip-line straight away, I’ll fall about two metres, which seemed manageable, if not ideal. It’s the waiting for the things that’s the worst, but I was pleased that my fear of heights actually never kicked in, so I was unusually unstressed by the arrangements. I mentioned to one or two people (perhaps twelve) about how brave I was being.

Four people go down the zip-line at once in a line, so you can race if you want. I had no interest in racing, I was focused on surviving. There was a group of three younger women in front of us, one of whom was looking for someone to blame, so I felt a bond with her. I mentioned to the guy in charge that Liam and I wanted to go down together, so they set the three women off and there was lots of screaming. Not ideal.

Then it was our turn, two sisters, as well as Liam and myself. I moved Liam from the end position of the four as I felt the need for protection by being on the edge, so I was at the right-hand side. I did query with the guy about why was I wearing a helmet if this zip-lining was safe, and he couldn’t answer that to my satisfaction. He also confirmed that there had been no bird strikes of riders recently although he said he could find a gun for me to shoot them with if that would help. I checked on numerous other elements of the safety arrangements and they confirmed no-one had ever plummeted to their death. I ignored the “there’s always a first time” comment.

I had thought there was some sort of seat that you, well, sat in. But, it was all part of the harness arrangement I had been trudging up the mountain with me, so they just get you to sit back and put your legs up. After I queried six times that I wasn’t sure I was that versatile or flexible, we were all set.

There’s a board which is moved across which means that you can actually then go if you move your feet off the wall, but just as that happened, one of the sisters panicked and said she didn’t want to do it. They tried quickly to get her to change her mind, but they didn’t push that and just unhooked her as the board was moved back again to protect us from accidentally going. Liam reassured me that he didn’t think she could hear my safety questioning of the team members, so I didn’t put her off. She had though been evidently nervous before, so it wasn’t entirely surprising that she backed out.

And with that, I didn’t have much choice other than to be brave and think of Poland. It was actually all rather exciting, I never did get a fear of heights, as it was more like being in an aircraft (although more Ryanair than British Airways) and there was no fear of falling. Liam was trying to race down as he’s like that, but I quite enjoyed just being in the air. The guy had mentioned to tuck your legs under you if you started to sway and that trick worked for me.

We got to the bottom of the first zip-line and I was very excited at how brave I’d been. Liam had nearly gone through the two brakes of the safety system as he’s always enthusiastic like that, but my landing was more sedate. I then charged up the tower for the second zip-line, forgetting I’m scared of heights, and told the group in front how brave I’d been. They were equally impressed with their bravery, but I thought I just had the edge if I’m honest, although I didn’t say anything. The younger woman remaining from our group was disappointed that her sister had backed out, she thought that she would have enjoyed it. And I think that’s almost certainly the case.

The second zip-line was about the same speed and Liam nearly went flying through the braking system again, but he spent half of his journey down doing some odd acrobatics to show how agile he was. I just remained in the seating position they recommended, I don’t feel the need to be overly adventurous. Safely unclipped, I looked back up the mountain and commented to myself, and several people passing by, about my bravery. The mother of the two girls arrived and didn’t seem thrilled that she had spent £50 for one of her daughters to be driven to the top of a hill and driven back down again, but there we go….

No, this isn’t a SAS recruitment poster, that’s me after my very brave zip-lining experience. I did think about phoning (well, e-mailing, I’m obviously not going to phone people) the SAS (the military people, not the airline) to see if they needed any new applicants or even trainers, but I couldn’t find on the Ministry of Defence web-site a craft beer menu from the military bar and that would be a deal-breaker for me.

The expedition ended with a packet of crisps each from the cafe and I mentioned to Liam just how brave I’d been. I would do all of this again and there are a number of sites in Wales where this company operates from. There’s one where you lie down which seems quite exciting, but I might come back to that in the future. Liam spent the next fifteen minutes on his phone planning dates in the future when he could take his children down the zip-line, but that’s because he was primarily excited about doing it all again himself. I would say though that Liam was an ideal person to do this with, he’s good company and doesn’t panic about things, which is very handy in these near-death situations.

As if this adventure wasn’t enough though, it was then time to go paddle-boarding….