This isn’t exactly a professional looking photo, but there are cars parked in front of this rather lovely structure. That’s the excuse I’m using, and this piece of history is something I hadn’t known about before until following one of the city’s heritage trails. It’s Gybson’s Conduit (or Gibson’s Conduit), which was erected in 1578 by Robert Gybson to allow people to have access to water. This wasn’t entirely a philanthropic gesture, he wanted to take over the land on which an ancient well was sited and used at St. Lawrence’s Lane, so he needed to offer this pump/conduit if he wanted to build his new properties. Gybson was a wealthy man, as well as being Sheriff of the city, so I don’t imagine that he had many issues in securing that permission. In all fairness to Gybson though, he didn’t scrimp and save on his new conduit. Part of it is a little bit of an advertising hoarding for Gybson’s life and generosity, but it is also respectful to the Crown. Having noted that, Gybson seemed to be quite a controversial figure and he was later rude to some Mayors of the city, eventually finding himself stripped of his freedoms and liberties, which I suspect he was most annoyed about.

Left: THIS WATER HERE CAUGHT/IN SORTE AS YOU MAY SEE/FROM A SPRING IS BROUGHTE/THREESKORE FOOT AND THREE

Right: THY EAS WAS HIS COSTE NOT SMAL/VOUCHSAFIED WEL OF THOSE/WHICH THANKFUL [BE] HIS WORK TO SE/AND THERE BE NO FOES

The conduit wasn’t originally sited here, it was moved from a nearby location into the side of the wall of the new Bullard’s Brewery in the 1860s. At least it was saved at that point, although it’s not known exactly where it was originally located. It was moved again more recently when the Bullard’s site was turned into housing and it was moved to the other side of the wall on Westwick Street (George Plunkett has a photo) to face inwards to the new residential development. Although things are often moved for the convenience of property developers, here the structure feels much safer and away from the vandalism which it suffered from before. The Norwich Preservation Trust have overseen a fine restoration effort which was completed in 2011 and they have restored the stone and added colour back to the conduit. 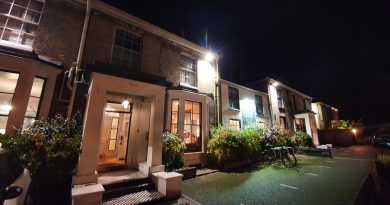