Excuse the only occasional blog posting at the moment, I’m not doing anything of even slight note in the main, but travels will continue later this month. 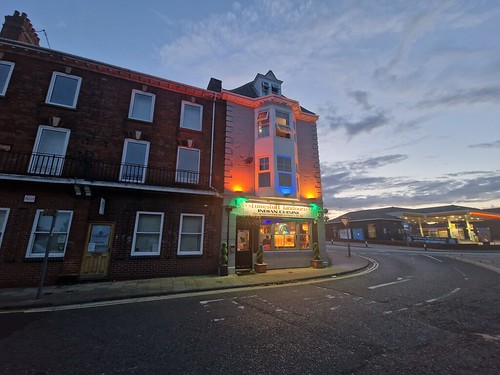 As I’m around for a couple of weeks, Richard had a brilliant idea of suggesting going to the Lowestoft Tandoori. He had visited before and enjoyed it, and since it’s my favourite cuisine, it seemed worth a visit. Richard feared that it might not match expectations on his return, that’s always the danger of returning somewhere and it not quite matching up to previous experiences. However, it was well reviewed on-line and I was optimistic. 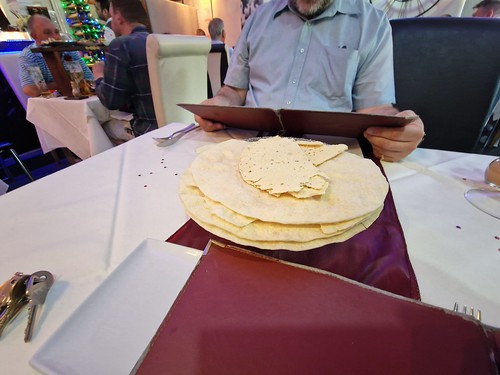 The welcome was immediate and felt authentic, with Richard’s idea of booking a table being most sensible since it was otherwise full. The relatively small space of the restaurant did surprise me slightly, but they’ve carved it up neatly so that no table intrudes into the privacy of another. We were offered poppadoms and I immediately said yes, forgetting whether to check with Richard, but he rarely needs much convincing on matters such as this. 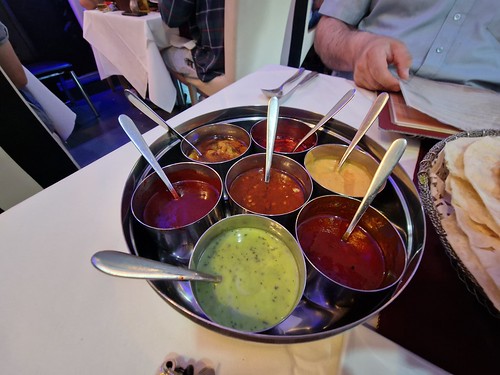 This is the finest array of dips, condiments, sauces, or whatever you want to call them, that I’ve seen in an Indian restaurant. I’ve had something of an obsession with Indian food since going there many years ago, with my aim of visiting an Indian restaurant in every country only losing its pace since I keep going back to the same countries. I understand that the British version of Indian cuisine is inevitably different, but there was a passion here on detail and that was evident whether measured by the variety of condiments or by the quality of them. 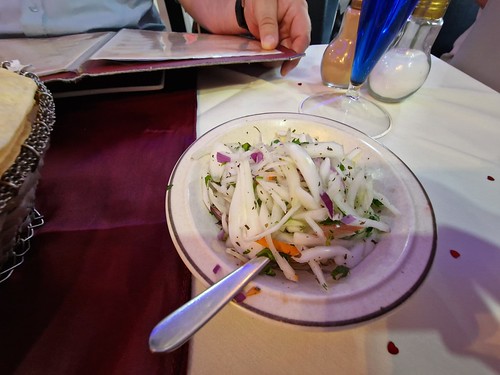 And there was no shortage of cucumber and onion salad, and when we finished that one, they brought over another bowl. It could have done with some tomato in it, but that’s about as critical as I’m going to get with this post. I think we might have got a little swept along with the excitement of poppadoms, which is something that I think is a thing, and we (well, I, again without consultation with Richard) ordered more. 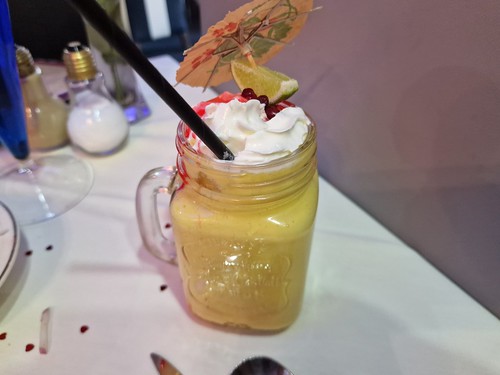 Indian restaurants should have mango lassi, this is a key element that I want to see. I feared they didn’t serve them here, but not only did they serve them, that presentation is on a level I’d expect from a fine dining restaurant. Even Th@li, a rather decadent central London Indian restaurant which is well reviewed other on Google for reasons unknown, wasn’t operating to these high standards. The taste matched the presentation, this was nicely done and the first time I’ve had a little umbrella on my mango lassi. 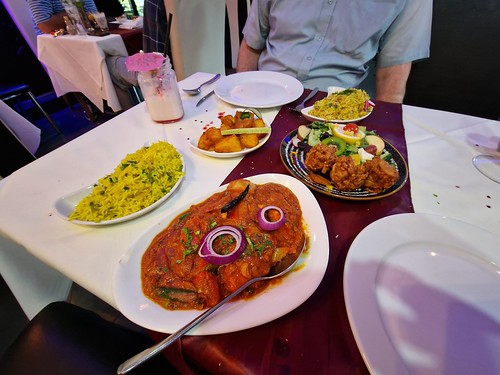 One of the interesting quirks of this restaurant is that they give quite a lot of stuff away free of charge, indeed, on such a regular basis that the owners must carefully price it into the rest of the meal. I say carefully, but the prices here are by no means expensive, indeed, I thought they were very reasonable. We each ordered a curry, a naan bread and a rice, but yet they came and gave us, without charge, a lamb & beef dish, a side of onion bhajis and a side of Bombay potatoes. Let’s just say that Richard took a doggy bag home with him, there was too much food for us to eat. But, I very much liked the concept of ensuring we had more than enough. It’s a concept incidentally that the Five Guys chain sort of have, they deliberately try and over-supply food to make it seem like extra value, although even they don’t give away quite so much. 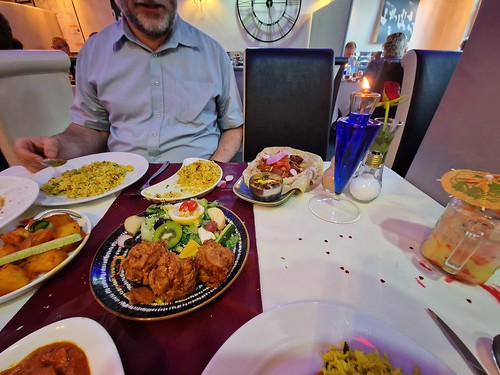 It was rather difficult to photograph everything as they kept bringing more things, it was like a birthday with more presents appearing. 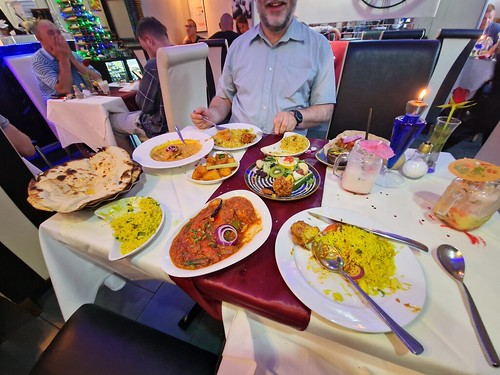 The peshwari naans arrived last, and I fear that we probably should have got one between us. But, back to the food, I had gone for the South Indian Garlic Naga Chilli Chicken, which wasn’t quite as spicy hot as I had expected, but it had a depth of flavour to it from the garlic, green chilli and peppers. The portion size was generous, although that is a slightly moot point given the number of sides that they brought over. The lemon rice was suitably lemony and the service remained attentive, polite and efficient. The onion bhajis were excellent, crispy on the exterior with a rich taste on the interior, and a generous side salad to go with it. I will confess to eating a chunk of that side salad, despite Richard promising to keep that a secret. 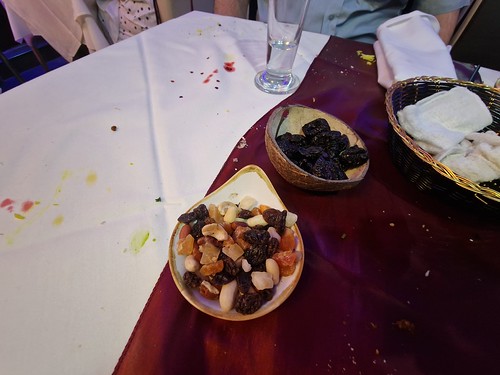 The first dessert which was brought along free of charge. Despite the restaurant being small, there were no noise issues, with the atmosphere feeling vibrant but not loud. Richard created quite a mess on the tablecloth, but like the professionals that they were, the staff didn’t say anything. 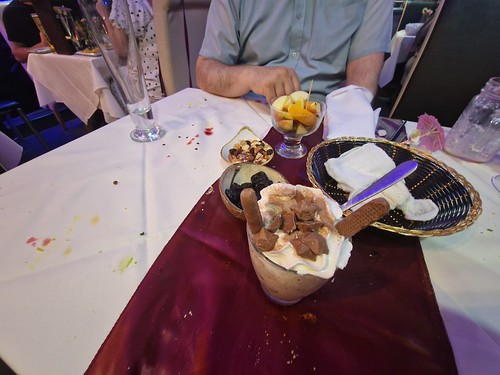 And the second free dessert….. There were also complimentary chocolates with the bill, just in case we hadn’t had enough. It’s such a clever concept, as those desserts likely don’t cost much, but it’s such a kind gesture that it is a final positive element to the entire visit. I wasn’t surprised that two staff members said goodbye as we were leaving, they were pro-active and efficient throughout the meal.

The reviews for this restaurant are some of the best that I’ve seen, it’s top on TripAdvisor for the local area and it’s sitting on 4.8 on Google Reviews. Given that they do deliveries and takeaways, which often get lower scores, it’s difficult to imagine any restaurant getting a higher rating. And they’ve sustained these positive reviews for years, so it’s no wonder that advance reservations are recommended. They have picked up a few reviews that they placed down items and demanded payment for them at the end of the meal, but I suspect those customers were mistaken, they just hadn’t realised how generous the restaurant was being.

I am keen though to ensure that standards are maintained, so I intend to go again, and I’ve already started hassling my friend Nathan to go there in a few weeks. Then I’ll start on other friends, as I feel I might be popping back here on a regular basis. I can think of few other restaurants where the quality of service is so professional, so all really rather lovely.