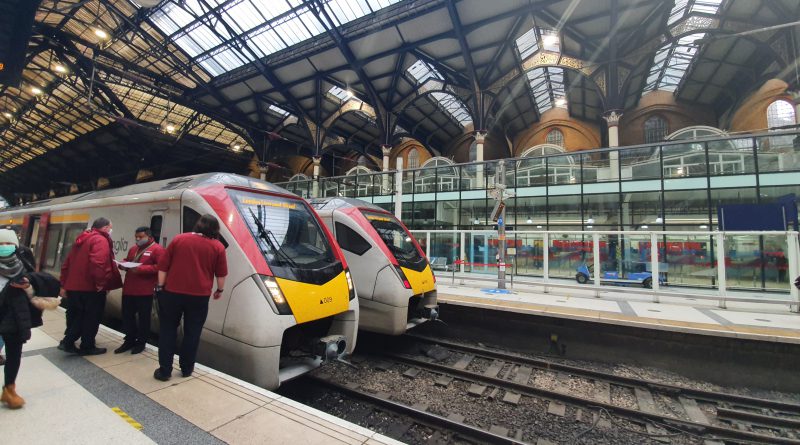 So, back to London Liverpool Street today, and this is my train having safely arrived into the capital. This wasn’t ideal when I arrived at Norwich railway station at 11:05, my train had been cancelled. I say not ideal, I wasn’t that displeased, as that means a delay repay gets triggered. I was travelling First today, which wasn’t some decision to switch to a more decadent lifestyle, but just because the price was pretty much the same as standard. I don’t think I’ve been in First on the new trains, they look all smart and tidy. The individual seats and I like these raised ones, there’s a ledge for my bag and also easily accessible power points. Despite the service having to cater for the 11:30 passengers as well as the 12:00 passengers from Norwich, it wasn’t overly busy. First class passengers get free snacks and drinks, so I merrily meandered to the cafe bar to collect my refreshments for the journey. There was a very friendly staff member at the cafe bar, although he told me something which I’ve suspected, which is that the InterCity 125s now removed from the route were more stable than the current new trains. He mentioned this as he was being flung about, as was I, and I can’t imagine how difficult it is to try and work like that. I had wondered if the trains were going faster and that was the problem, but he thought not. So, all that money and Greater Anglia have bought more rickety trains than the ones they already had.

These new trains don’t really seem to be perfect in numerous ways, it was a train fault that caused the cancellation of my 11:30 journey. The automatic announcements also went wrong as it kept repeating that we were stopping at stations that we clearly weren’t (stations such as Goodmayes and Romford are not stops which this service ever calls at to my knowledge), which led to the driver (or guard, whoever does the announcements) having to clarify the situation. The train was though clean and all was comfortable.

The fare for this journey was £18, more than the usual £10 that I pay. The train delay means that I get 50% back, so the journey cost me £9, which is entirely agreeable to me. So, all rather lovely.