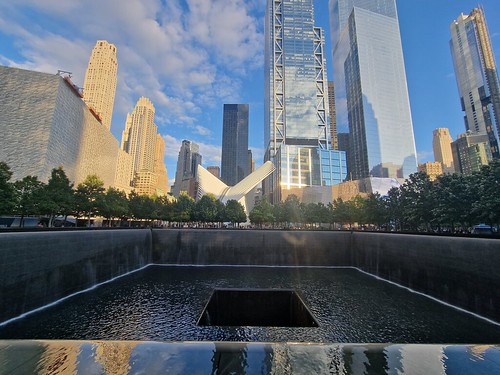 There are two reflecting pools at the World Trade Centre site and they mark the footprints of where the Twin Towers once stood. It’s a beautiful memorial, powerful in its size and the strength of the water cascading, but also peaceful because there feels like permanence and tranquillity. The the design for this project was submitted by architect Michael Arad and landscape architect Peter Walker, opening on 11 September 2011 to mark the tenth anniversary of the attacks. 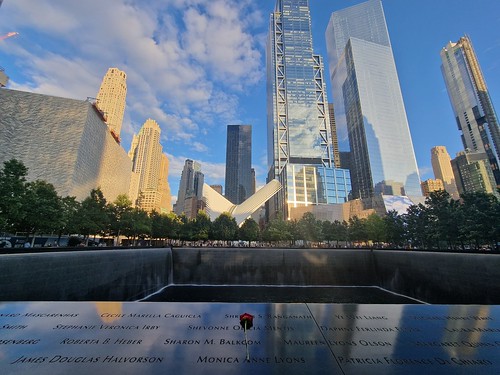 I decided to pick a random name to take a photo of, partly because of the nearby flower, and it was James Douglas Halvorson. The 9/11 Living Memorial has details of nearly all those who died and it has the details for Jim (not my informality, it says that’s what it was called) at https://voicescenter.org/living-memorial/victim/james-douglas-halvorson-jim. He was a 56 year old Managing Director of Marsh, perhaps starting to plan his retirement years before he was killed, leaving his wife and son. His son, Douglas James Halvorson, mentioned in 2001 that his father had completed one marathon and was very proud of that achievement, as well as he might be.

Some considerable thought went into where the names were placed around the pools, with the 9/11 Museum noting:

Within these groupings, names are arranged in a system of “meaningful adjacencies.” Friends and colleagues appear together, as well as the crews of each of the four flights and first responder agencies and units. Additionally, during the Memorial’s development, victims’ next of kin were invited to request that their loved ones’ names be inscribed alongside specific others. In this way, those who were connected in life reside together on the Memorial.” 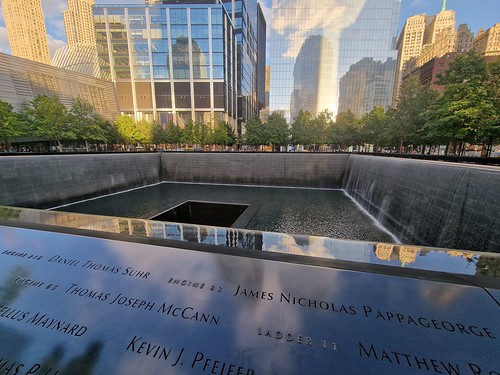 I’ve visited the 9/11 Memorial before, both the temporary one and the permanent one, and a visit to the latter is something that I’d definitely recommend. It was genuinely upsetting, primarily for me at least, as they have on display some oddments that people in the planes were carrying and also that had fallen from the offices. It’s those very random and ordinary things that survived that somehow felt so powerful.