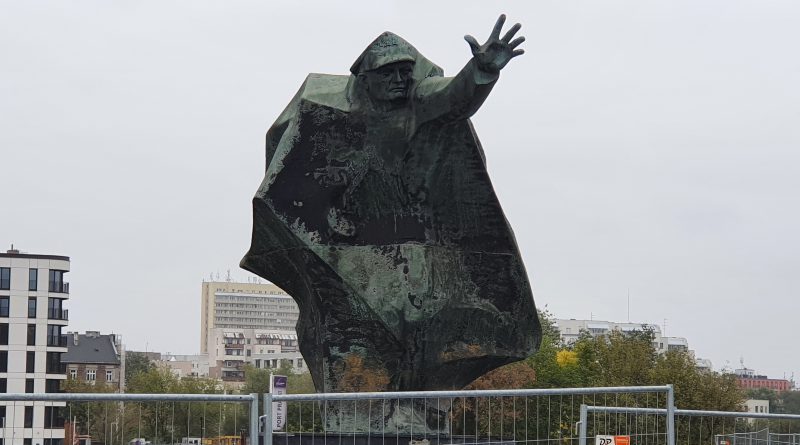 This memorial is currently closed off at the moment as work is being done around it and there was a plan a few years ago to move it, although I have no idea what is happening with that.

Anyway, this is a memorial to the Kościuszko Infantry Division which was formed in the Soviet Union, but it was mostly comprised of Polish fighters. Hopefully, I have my history correct here, but this memorial is on the Praga side of the Vistula River, so the opposite side to the main part of Warsaw. Back in 1944, the Polish resistance (the Home Army) were looking to retake Warsaw and that’s nearly what they did, with the Warsaw Uprising, a ridiculously brave campaign to free their city. This undertaking needed to take place on both sides of the Vistula though to be successful and to liberate Warsaw.

The Polish resistance knew that the Soviet Red Army was nearby and they attacked the Germans expecting that they would receive assistance. However, they didn’t, Stalin held the Soviet army back whilst the Nazis destroyed Warsaw block by block. The Warsaw Uprising perhaps only failed because the Soviets didn’t offer their assistance, although some members of Polish divisions did try and cross the river to help.

This memorial marks the efforts made to retake Praga, which were successful, but on its own, they weren’t enough to save Warsaw. The memorial was designed by Andrzej Kasten and Bogusław Chyliński, with work starting in 1983 and being completed in 1985. The area has fallen a little into disrepair more recently, but renovation works have at least started now.