Another in my series of posts about the Rosary Cemetery in Norwich. 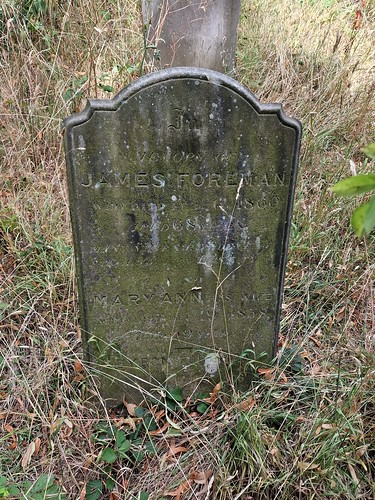 This is one of the photos of graves that I took at random in the Rosary Cemetery and I’ve failed to establish much about it. This goes into the category of hoping someone sends me something useful to add to this page, which does happen occasionally.

In short, it’s the grave of James Foreman, who was born in 1792 and died on 6 February 1860 at the age of 68, with his wife, Mary Ann Foreman who died on 19 December 1858 at the age of 59. They had four children, including Walter, Randal, Byron and Mary. There’s only two mentions of James that I can find in the press, which is when his daughter got married to Richard Middleton at Surlingham Church in late 1855 and when she died in 1870.

James was a miller at Surlingham Mill, now demolished, but I think it stood around here on the appropriately named Mill Street. Which got me thinking, as he lived in Magdalen Street in 1841 when he was a miller, and that’s quite a trek to get to work, about a 4 mile walk each way. Cycles were rare before 1850, so I have no idea whether millers stayed where they were in the mill or commuted to work as it were. I’m suspecting the latter, as the family entirely disappeared for the 1851 census, so they must have been holed up somewhere odd where they were missed. Given his daughter got married at Surlingham church, I’m going with the idea they lived locally and didn’t fill in the census. It’s either that or the family moved to Newmarket, where some of the 1851 census is missing, but that sounds unlikely. I also can’t work out exactly where on Magdalen Street the family lived in 1841 and the enumerator seems to have been slightly drunk when traversing his way across the city.

This has led me to spend some of my evening wondering how exactly people moved about the place in the 1840s (I probably need to get out more), although Brundall railway station opened in 1844 and he could have caught that from Norwich and got the ferry across the river Yare. The railways must have been such an empowering moment for those who needed to get about the county and I like to think that James caught them every now and then to get to Surlingham. Quite why I find that reassuring, I have no idea.