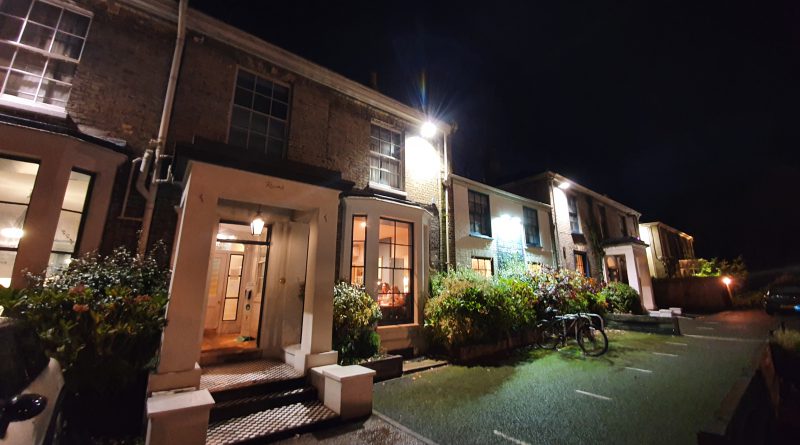 This is a City Club venue, a chain that is relatively new to me, but I rather like. I’ve been to some of their venues without realising such as the Bath Brew House, but recently have gone to the Old Ticket Office and the Cambridge Brew House, both in Cambridge. I had looked at going to some of their London pubs, although the ones I have been looking at haven’t re-opened yet.

Anyway, this City Club venue was still doing their version of Eat Out to Help Out until the end of October, with food half price before 18:30, which is very generous. There weren’t many tables left, although we only booked the day before, so we were fortunate to get a table with the offer still going.

The welcome was friendly, although the staff member tried to take our order very quickly and then didn’t re-appear for eleven minutes (yes, I did time it, although only because we wanted to be sure we got our order in before 18:30, although I don’t think it mattered). The beer selection was limited to two, neither overly exciting, but the Norfolk Topper was Barsham Brewery is local and was well-kept. I noticed then writing this that I also had this at the Old Ticket Office and was pleased to note I gave it the same score on Untappd which shows some consistency. I understand that these are difficult times for pubs, but I’m hoping that there might be a little more innovation in their beer selections in 2021.

I was dining with my friend Richard, who bought a wine that was more expensive than my main. He’s very decadent though. The environment was all clean and comfortable, with the venue also being quite a large hotel, so there was a formal element to proceedings, but nothing that was too frightening for me…… Being a creature of habit, I went for my usual dishes, not least because Richard was very adventurous and had venison carpaccio with crispy parsnip beignets. Apparently it was lovely, but I’m not into eating raw deer, so he had the more exotic dishes. My starter of salt and pepper squid, which was served on a dollop of chilli mayonnaise. The salt and pepper element was a little lacking, but the squid was well cooked and wasn’t chewy, which is rather a good sign. All very acceptable as a starter. This batter on the haddock and chips looks burnt, although it didn’t taste like that and I like some crispiness to the batter anyway. It was a large portion, well presented and had been drained well so that the chips weren’t all moist and annoying. Tartare sauce is one of my favourite things and I think this was home-made, and if it wasn’t, I liked it anyway. The fish was tender and everything was cooked well, so all entirely acceptable again.

The starter, after discount, was £3.50 and the main was £6.50, so I thought that was sufficiently good value for money. I would come here again, and likely will, as it’s a comfortable environment and I’ve got some confidence that they’ll ensure everyone is satisfied. Richard and me faffed about with their app, but it does pretty much work and let us split the bill and pay separately, without needing to hassle the staff. Applying the discounts involved staff intervention, but this was done efficiently.

I thought I’d have a little look at TripAdvisor to amuse myself, and the restaurant isn’t quite as well reviewed as I would have thought. Primarily, it’s got the first review that I’ve seen marked by TripAdvisor as “a serious safety incident” and I’m moderately surprised that the hotel hasn’t replied to this. The more recent review of 1/5 for refusing entry to customers coming in at 21:55 seems harsh, if they’re closing at 22:00 it’s not entirely sensible to serve a round at that point. Anyway, having read the reviews I’m less tempted to come back, but I think we still left happy with the price we’d paid. And Richard forgot to apply his £5 welcome discount, so he has to go back to get a free drink. Well, I would, no point in not getting that.