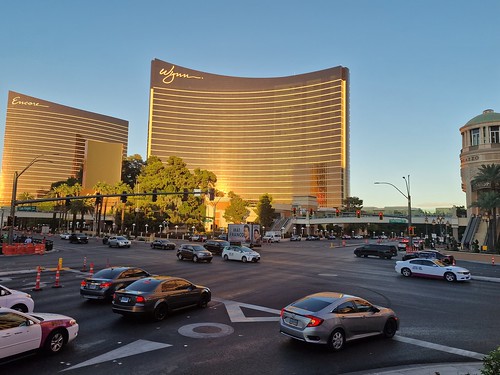 On 6 October 2022, another tragedy hit the city of Las Vegas when two people were stabbed to death and six others were injured outside of Wynn casino. There’s a separate Wikipedia page about the incident for anyone who wants to read about the background of this attack. The incident took place at 11.40 and I had walked by here at around 11.10, so I wasn’t far off in terms of the time. Although the attacker was targeting two show girls he also went on to attack nearby tourists, so I was fortunate not to have been nearby. Others, just by chance, were less lucky.

I hadn’t realised that something had happened until I tried to leave the Venetian later on during the afternoon to get back to the hotel. The exits were all closed off with staff directing people back to the main entrance, which was quite tricky to find in a large casino with bits shut off. The entire stretch of sidewalk between the Venetian and the Wynn was closed off whilst the police were investigating. It took me around 20 minutes to walk around the closed area as an indication of how much of the sidewalk had been barriered off. I took this photo at the junction which had by now reopened, but there are plenty of police still visible in the late afternoon.

A 32 year old man, Yoni Christian Barrios, was arrested at the scene for the crimes committed. In early December 2022, the Nevada courts decided that he was unfit for trial and he is now at a state psychiatric facility. I was talking to someone on a bus (it’s very hard not to get involved in conversations on buses in the United States) later that day when I went to downtown Las Vegas for the evening and he was the first die hard Donald Trump supporter that I’ve met in the United States. He was an interesting chap and I met him again by chance on another bus the next day and since our bus was heavily delayed by another police incident we had quite a long conversation about politics. I’ve related this conversation to friends and I might well come back to it on this blog, but for the moment the element that interested me was he claimed he could have been there and he wanted to carry a gun to defend himself from being stabbed.

Rolling back slightly, one of the elements that I dislike the most about the United States is the level of gun crime and general violence. It’s not really sustainable for a developed country with the astounding number of deaths from guns that take place every year, not least hundreds of children. However, it was very difficult on libertarian grounds to argue against the assertion that an individual should be allowed to have a gun to defend themselves in cases such as this. It seems in this case though that the attacker would have caused a greater loss of life if he also had access to a gun, so it is perhaps fortunate that he doesn’t appear to have done. It’s all not long since Stephen Paddock killed 60 other people when firing at them from his Las  Vegas hotel windows.

Anyway, politics aside, it was Las Vegas that was the city that I felt safest in during my trip so I hadn’t really expected to hear of an incident during my time there. It was New Orleans that the danger was evident where the police have lost control and are in retreat as the city now has the highest murder rate in the United States and where I had my own little incident I’ll write about in due course. God bless though to all those involved in this horrific incident.

2022 US Trip – Outside the Venetian Resort Las Vegas