This stretch of Roman Wall is located next to the Tower of Elsing Spital, by what is now the road named London Wall. This is the listed building map of historic buildings in London, with the red line being the scheduling of the remains of Roman Wall that still stand (or where foundations are known to survive), a series of large and small fragments which show the size of early Londinium. This section of Roman Wall is near to the top of the image, a little closer to the Blackfriars end rather than the Tower of London end. Looking down from the aerial walkway, this would be a much busier scene in summer months with people eating their lunches or just taking some time to get outside in the relative peace and quiet of the surroundings. That’s Salter’s Hall in the background, now a large charitable institution, but previously one of the Livery Companies of the city. It’s a modernist style building which is in keeping with the nearby Barbican development in its post-war contemporary architecture, although it doesn’t fit quite as easily with the Roman wall. The plaque is now harder to read, but notes when this area was laid out as a public garden in 1872. Much of what is visible isn’t part of the Roman wall, although the foundations of the original structure are still there, but they were built on during the medieval period when it was being strengthened. The brick section on the far right of this photo is from 1477 when Ralph Jocelyn ordered substantial repairs to the wall, at that stage in a bad state in some sections, during the War of the Roses. He bravely raised taxes to fund this endeavour, as well as purchasing large quantities of bricks and lime. There was also a church, St Alphage, which backed onto this site and the former wall lines are marked on the ground. This church was constructed in the eleventh century, but was knocked down during the Dissolution of the Monasteries. Another Victorian stone, but it’s now nearly entirely unreadable, damaged by the decades of London smog, pollution and not helped by the bombing of the area during the Second World War. The medieval putlog holes are still visible where the wooden scaffolding was once placed against the structure.

The rear of the wall is visible from the gardens of Salter’s Hall which are sometimes open to the public, but which were closed when I visited. The medieval brick additions, and the only stretch of crenellations along the wall which survive, are much more easily seen from this side. The reason that so much of this wall survived was due to it being incorporated into later buildings, although it was only after the bombing of the Second World War that it became quite so visible. 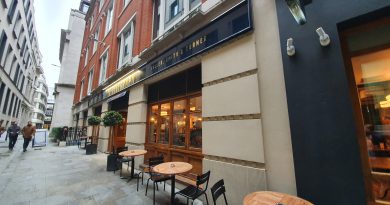