After getting lost in the store (as a spoiler for someone who hasn’t been, the store is ridiculously big and maze-like), I found Gordon Ramsay’s burger restaurant on the fourth floor. To be fair, I did know it was on the fourth floor, but I still had to hunt around for it when I got to the right level. I had pre-booked as part of The Fork’s promotional offer which is really ridiculously generous, but which in short gave me £50 to spend here.

Back to the restaurant, I really don’t like those tables by the rope in the above photo, that’s in the middle of the women’s clothing department, which doesn’t feel a great fit (excuse the pun). Fortunately, I wasn’t seated here, but was shown to a table in the main part of the restaurant and I suspect that these external seats are used only as a last resort. They should be better sheltered from the corridor in my view, but there we go.

Service here was friendly, efficient and engaging from the start. There was an immediate welcome, my booking was found and I was shown to my table. The timing was well measured throughout and I was never left waiting for service. The training here is clearly professional and the staff were always engaging. This isn’t a cheap place to visit, although it’s also not off the scale in terms of the cost. There are burgers, hot dogs and salads, but although the hot dogs sounded tempting, I thought it appropriate to go for a burger. The restaurant only cooks them medium well or well done, so I went for the former but I would have preferred something more medium. There is an £80 Wagyu burger on the menu for those who want to lift their experience even more, or just if they want to spend a lot of money. I didn’t. That’s a very poor beer list and it transpired that they didn’t even have the Curious Brew, with a manager coming over to apologise that I had been able to order it. Although I accept that people don’t necessarily come here for beer, there’s no excuse to not have a couple of decent craft beer cans available on hand. The 1849 Premium Lager, which is made by the Bavarian brewer Hofmark Brauerei KG. It was perfectly acceptable and had clean flavours, a suitable middle of the road lager. Despite the fancy branding, this isn’t that exciting a drink though, although it was served at the appropriate chilled temperature. The meal was brought out promptly, after around 12 minutes. The portion sizes all veered towards the generous side and everything was at the appropriate hot temperature.

The burger itself was nicely presented and the tomato was of a good quality, the pickles and onion added texture with the relish adding some extra flavour. There was some lettuce which never does much to anything. This was a nice burger which had a meaty flavour and was suitably seasoned, but it didn’t stand out as being anything beyond the sort of food I’ve had at decent pubs. I can’t fault the restaurant for serving a burger that I enjoyed, but it wasn’t quite as marvellous as I expected, but maybe my expectations were a bit high.

The fries came with a lovely homemade ketchup and they were evenly salted, firm on the exterior and nicely seasoned. The onion rings weren’t that good at all though, they were the weak part of the meal. They were too doughy, the batter lacked flavour (they were beer battered, but I suspect they’ve used something like Greene King IPA) and the bottom onion ring was burnt. Personally I wouldn’t have had the Parmesan coating on them, but each to their own. They came with a pleasant chipotle ketchup, although the ranch dressing was a little strong in flavour for me and wasn’t like the ones I’ve had in the United States. My bill totalled £1.69 and it’s fair to say that I was pleased by that arrangement. I’m not sure I’d ever come here and pay full price as it’s all a bit too expensive, but for an experience at a Gordon Ramsay restaurant in Harrods the menu pricing felt reasonable. The food would be better served with a beer that complemented it better, and a rich stout here would have lifted things somewhat. Perhaps I shouldn’t view things from the prism of craft beer, but if a restaurant is going to do something, it should do it properly. The onion rings also weren’t really that good, which would be a disappointment if I had paid £9.50 for them.

This was a rather pleasant way to spend New Year’s Eve lunchtime though and the dining environment was clean, comfortable and relaxed. The turnover of customers was quite swift, but I didn’t notice any customer being hurried and I was never rushed anywhere. I would though recommend against being seating in the aisle of the department store, that isn’t ideal and takes away somewhat from the experience, so I was glad they didn’t try and put me there. The staff engagement was high which made for a nicer visit and there were no issues with my £50 The Fork payment credit. 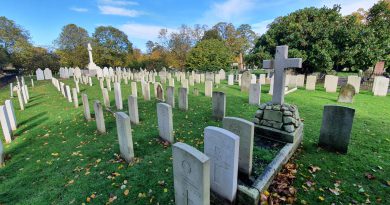