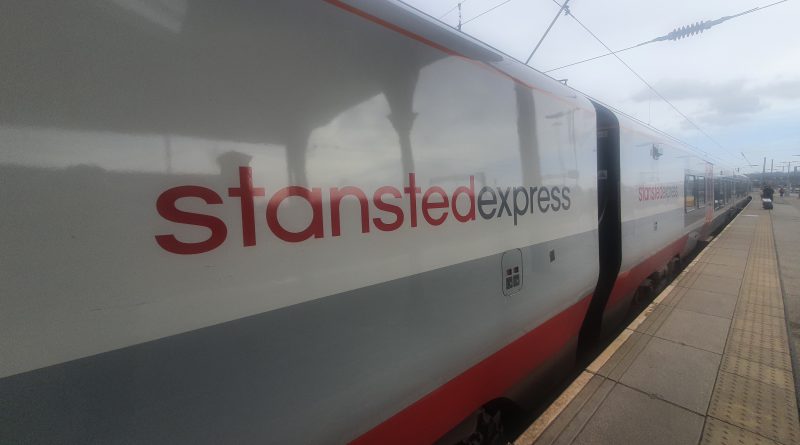 As this is a journey that I often take, I wasn’t going to write about it, but Greater Anglia’s choice of train annoyed me. So, I have. Norwich railway station on a Wednesday lunch-time in February, it’s getting busier, but I’m sure that passenger numbers aren’t there yet. Shame that West Cornwall Pasty, which was to the left of Starbucks, has closed, but that unit could perhaps be turned into a Greggs…. The M&S at the railway station is still closed, it’s been like that for two years now. Here’s the train, all shiny on Platform 2. And then I realised this. It’s the bloody Stansted Express train they’re using again. I thought to myself just how not ideal this was. I have no idea why Greater Anglia keep using these Stansted Express trains, they were never designed for this route. They don’t have tables, they don’t have first class (not that that much matters to me) and they don’t have a buffet car (actually, that doesn’t much matter to me either). Other customers have asked Greater Anglia why they use these trains on social media, but it’s seemingly a mystery to customers and Greater Anglia alike. Two groups came walking by me on the train on a hunt for tables, but their search would have been forlorn. The conductor, who was friendly and helpful, made an announcement saying that a last minute train change was required, but this train continually goes up and down the Norwich to London mainline so it’s not a rare occurence. A lack of table is annoying when using a laptop, although the power points worked. It’s quite hard to sit at these seats without wanting to put your feet on the chairs opposite, because that would make using a laptop much easier. However, I consider that to be a crime against humanity, although it’s possible to put one foot on the heating panel below the window. Greater Anglia have also decided they’d like their trains to be like rolling furnaces along the track in some sort of commemoration of the heat of steam engines, and there’s no way for a customer to cool the carriage themselves. We arrived into London Liverpool Street at the unusual platform 4 (unusual as in this train doesn’t usually stop there, it’s otherwise a normal platform) which I guess is because they’ve decided that the Stansted Express train was going to be used to go to Stansted. London Liverpool Street is definitely looking busier. All of the e-tickets were failing (again) so the gate guard was busy checking tickets manually, which I’m not sure is how the system is meant to work. As an aside, I went to the rear of the station and this is all looking much tidier. I don’t know when this was landscaped, but the whole area around London Liverpool Street appears to be being modernised, it’s all a clear improvement.

I suppose it’s hard to complain with a fare that’s only £10 from Norwich to London (although, as is evident here, I’ve had a good go), but this would be a nicer journey if the train was more comfortable. But, the staff on board were friendly and conversational, although the train was rather hot, but everything ran to time and was efficient.