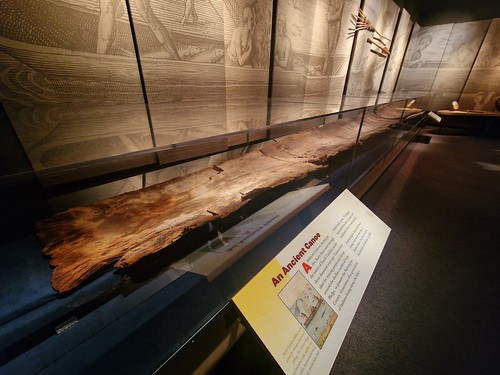 American museums often have a difficulty that they have nearly no exhibits to explain their history before the European settlers came over, namely because a lot of items owned by the native Americans were either transient or discarded and didn’t survive. The usage of the word “ancient” can in American terms can really be relatively recent, but this is one of the oldest exhibits that I’ve seen in an American museum that’s from the local area and isn’t a piece of stone.

It’s a thirty foot long canoe which was used 3,000 years ago by native Americans in Lake Phelps which is off towards the east of North Carolina. Generations of people used canoes in the area and in 1986 archaeologists discovered two dozen of them sunk into silt at the bottom of the lake, although they left some there for their own protection (of the canoes, not the archaeologists). Humans only reached this area around 15,000 years ago or so, meaning in terms of human history in the region, this canoe certainly is ancient. There’s more about this canoe at https://www.qaronline.org/blog/2020-06-01/artifact-month-lake-phelps-canoes.