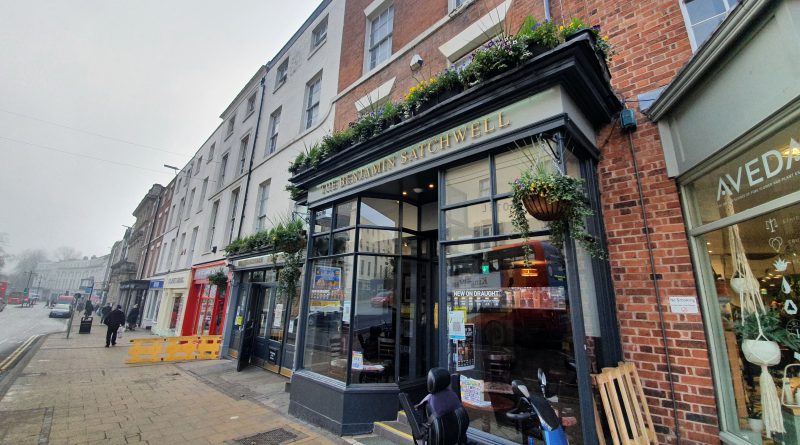 I don’t bother writing any many of my visits to JD Wetherspoon outlets as that would get repetitive (even more so than I usually am), but this one is listed in the Good Beer Guide and so I’ll write about it for completeness. It is named after the man who is effectively the father of Royal Leamington Spa, who in 1784 discovered natural spring water that wasn’t controlled by the Lord of the Manor. That mean a spa town which soon received royal interest and it grew from a small village into the substantial town that it is today. The pub was busy and it was difficult to get many photos without people in, so here’s one of the photos that I took for Untappd and that’ll have to do. The beer selection was above average, six different real ale options and these were well balanced across the various beer styles. I went for half a pint of Novus Dry Hopped Porter and half a pint of Xk Strong, both from Byatt’s Brewery of Coventry. The pub is made up of two former shops and it goes back a long way, with a lengthy bar to one side. This is the Xk Strong and both beers were very drinkable, well kept and at the appropriate temperature. They also cost the ridiculous sum of £1 each, so I was entirely happy with the value that I received. Especially since I used Wetherspoon’s electricity to charge my devices up and there were plenty of plugs dotted around.

The pub was relatively clean and tidy throughout, so it felt comfortable enough. The staff were friendly and everything felt competently managed and run. There’s nothing here for me to complain about with this beer selection, beer pricing and beer quality. However, I went to look for reviews on-line to see what other people were complaining about….

The reviews are about average for a JD Wetherspoon outlet, which is mostly positive with a smattering of constant whinging and moaning. I like reviews such as:

As that tells me all that I need to know about the reviewer. I also liked the 1/5 review which noted:

“Never again will I eat in a green king discussing..”

Assuming that meant Greene King and disgusting, that seems a bit harsh, although Greene King venues are usually, well, not ideal. But this isn’t even one of their pubs…..

“Didn’t manage to get a drink, too many people crammed around the bar and not enough staff?”

I have sympathy here, there can be a pub that’s quiet and about 50 people standing at the bar blocking it. Fortunately, I avoid such things with the app, but some pubs still haven’t mastered how to deal with this problem.

Anyway, I’m digressing again and reading reviews from years ago, so I’ve probably reached the end of what I need to write here. I’m content that this is a perfectly decent entry into the Good Beer Guide, with friendly staff, plenty of decent beers and a cleanish environment. All quite lovely.