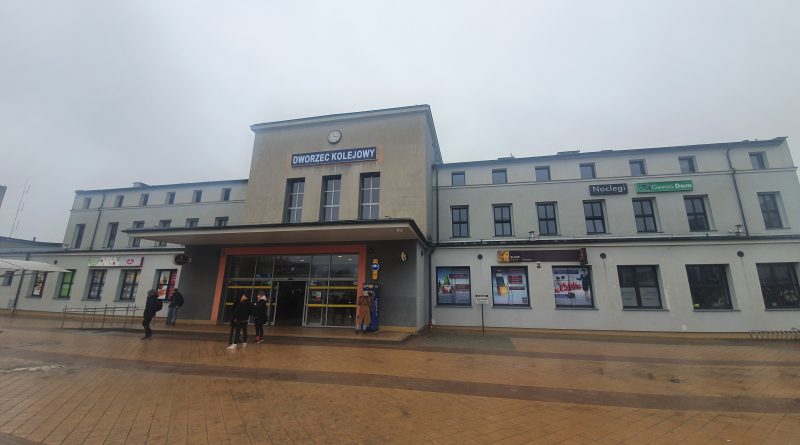 This was meant to be a straightforward rail journey of just under one hour from Gdańsk Główny to Elbląg, using a PKP Intercity service. I’ve mentioned before that I find this to be the easiest way of seeing rail departures and arrivals, regularly updated yellow and white sheets. It’s far better than the UK system, with every stop listed so that it’s easy to understand where the trains are departing from and at what time. It’s surprisingly hard to get such clarity about the rail times and options when at a railway station in the UK. As an aside, this was the train to Berlin, which I had expected to be a little grander. And then to my slight disappointment, my 09:41 train started to show as delayed for nearly an hour. But just under it is a 09:44 train which is going to the same destination of Elbląg, it just takes a little longer. This gives me a dilemma as I don’t understand the Polish rail system well enough to know if I can transfer trains to that one, as I have a ticket for a specific train. It’s also a rural train (Przewozy Regionalne  or PR) which used to be part of PKP, but they’ve been given to the regional governments to operate, so it’s not the same company or set-up.

As everyone got on the platform got on the train, I guessed that I could likely use this service. However, I’m not taking risks like that, so I went and asked the guard if I could get on his lovely train. He was friendly, grinned and pointed to get on. I was concerned whether he was grinning because he was excited that he could fine a passenger, but it transpired he was just keen to help. That friendliness seems to be path of the course in Poland, so it didn’t come as a complete surprise. What didn’t help was having my ticket checked a further two times by different guards, although they seemed satisfied with my ticket for the wrong train. The train itself was clean and modern, running to schedule and the signage on board was clear and timely. And safely into Elbląg, on time and without being fined or being told that I had the wrong ticket. It’s not the most glamorous of railway stations, but I was pleased to get there. There has been a railway station here since 1845, but it was rebuilt in 1937 and then repaired again following the end of the Second World War. On May 26, 1916, the German Emperor, Wilhelm II, arrived at the railway station on a visit to the city. Back then, the city was known as Elbing and was the second largest in East Prussia, the section of Germany which wasn’t connected to the rest of the country because of the Polish corridor. And the frontage of Elbląg railway station. Fortunately, everything went well, although I could have done without all of the confusion with the train delay. But I’m glad that I didn’t wait for my heavily delayed service, Gdansk railway station is undergoing modernisation and there’s not a great deal to do there at the moment.