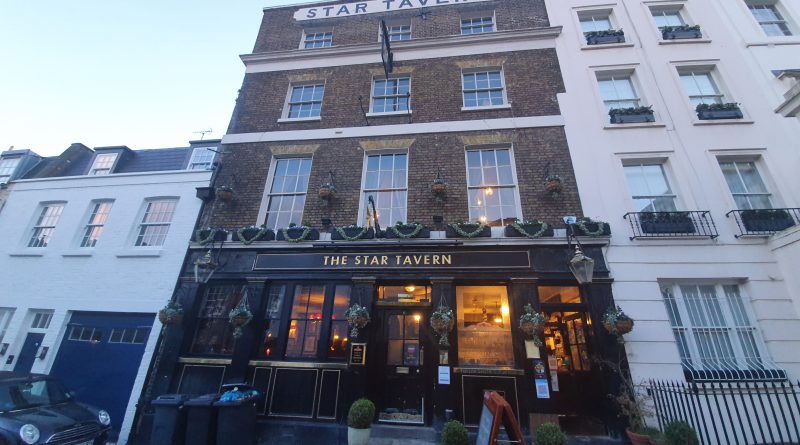 I suspect most people have to come looking for this pub, it’s not one you’d easily stumble on, tucked away on Belgrave Mews. It’s in the heart of the diplomatic area of London, with the German and Austrian embassies being located over the road. The history is one of the selling points of the pub and although it has been serving customers since the Victorian period, it’s the 1950s and 1960s that perhaps are the most notorious. This period was when the pub was frequented with criminals and also many celebrities from the period, not least figures such as Princess Margaret, Diana Dors, Clement Freud, Elizabeth Taylor and Bing Crosby. It’s also where the Great Train Robbery was planned, in the room upstairs, and where corrupt police officers were known to hang out.

The pub themselves have some history about the building and its characters on their web-site, I like it when an effort is made like this. The pub also haven’t glorified the crimes that took place, which caused substantial suffering to many, so it remains an intriguing part of the history. The main room downstairs, all rather comfortable and cosy. The welcome was friendly and the beer selection reasonable, mostly Fuller’s since it’s one of their pubs. The half pint of ESB and bacon crisps, reasonably priced for the location, and the beer was everything it should be in terms of the taste and temperature.

I liked this pub, all laid-back and comfortable, with the clientele seemingly much more genteel than they perhaps once were. The pub is listed in the Good Beer Guide, but that might be an under-statement, it has been in every single issue which as of 2017 was an achievement just five pubs had managed. These are this pub, the Buckingham Arms in Westminster, the Square & Compass in Swanage, the Queen’s Head in Cambridge and the Roscoe Head in Liverpool. They received their 45th entry award in 2017 which was presented by the brilliant Roger Protz, so not long until they hit 50 years of entries in the guide. A remarkable achievement.