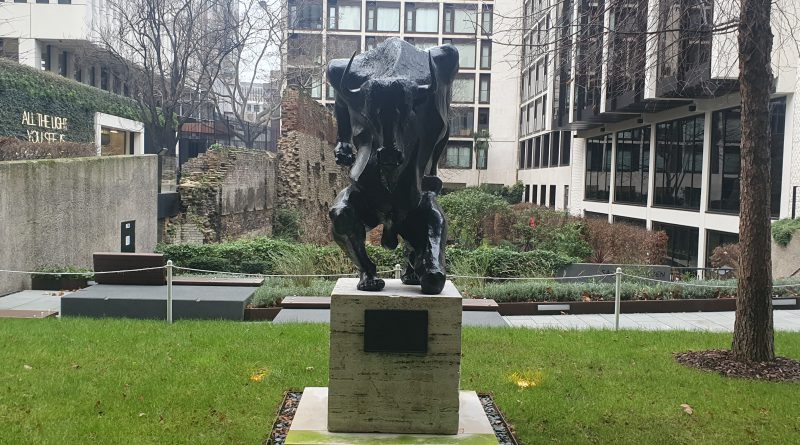 With a stretch of Roman Wall in the background, this is the public space in front of Salters’ Hall. Part human and part bull, the sculpture of the Minotaur was designed by Michael Ayrton (1921-1975) in the early 1970s. I was interested to understand the significance of why the monument was placed here and the link, but it transpires that there’s absolutely none. It was originally designed for a private estate, with this cast going to a number of locations before the Corporation of London purchased it in 1973. They then placed it in Postman’s Park, but after just over twenty years it was thought that the sculpture needed a change of scenery and it was moved to a high walkway near to the Roman wall. When that was all redesigned, he was brought down to ground level on the terrace outside the Guildhall School of Music and Drama.

The sculpture does feel a little incongruous to its surroundings, as if it’s trying to make an artistic statement, but no-one is quite sure what it’s saying. It’ll perhaps be moved about again at some point in the future, maybe it’s more suited to somewhere like Canary Wharf where an aggressive sculpture might be more fitting.