This is the sort of centrally located (it’s very central if you’re at the railway station, more like 10 minutes away from the city centre) Ibis Hotel in Leicester. It has 94 rooms and is part of the Accor hotel and I’m pleased to add that I no longer need to start posts with a mention of problems with their customer service (since my long standing issue seems to have now been resolved). Guests entering on the ground floor see this little reception type area, although the main reception and all of the staff are on the first floor. The check-in process was all efficient and the staff member seemed very keen to be helpful, a kind and warm welcome. The Ibis room, which is pretty much like all the others in the chain around the world, although the television was a little small (not that I ever turn them on anyway). I wouldn’t say that the room was spotlessly clean, but it was sufficient for me. The view out of my window of the railway station. I was pleased that the window opened, the sound of trains was quite smoothing. Well, the sound of what sounded like a freight train braking at 3am was less exciting, but it’s all part of the character of the area. The welcome drink of Boddingtons, which I consider to be an acceptable option, so that keeps everyone happy.

I had a look at the reviews of the hotel, and it’s pretty much in the middle of ratings, it’s managed to upset a fair few people, but also pleased quite a lot. Alongside some of the ridiculous reviews, such as an angry guest who was annoyed that the hotel wouldn’t put balloons in their room, there are more worrying ones such as one which says a previous guest had been smoking in the room and the hotel didn’t resolve the smell issue, with another guest mentioning that the light switch was hanging off. If there’s a smell of cigarette smoke then I’d refuse the room, and I’d expect that the hotel would find another room even if that was in another hotel. The hotel is within its rights to charge the previous guest for their costs. Anyway, I’ve digressed again.

Incidentally, the hotel doesn’t advertise car parking as they have five spaces which aren’t accessible spaces, but they’ve had several guests turn up, park in a neighbouring car park and complain they’ve been fined. Sounds like an interesting drama to listen into at reception….

There were minor internal noise issues on one night, although nothing that troubled me. Others might not have liked the noise of the railway and road outside, but I like such external distractions so all good. There wasn’t air conditioning available in the room, just a centralised air warming and cooling system. However, with the window opening, it wasn’t difficult to regulate the temperature.

Anyway, all good and reasonably priced. I’d suggest that this is likely a reliable option for anyone wanting relatively inexpensive accommodation near to Leicester city centre. 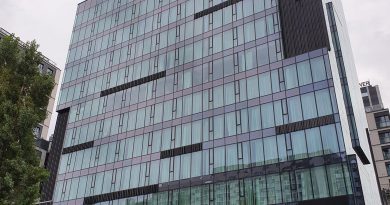