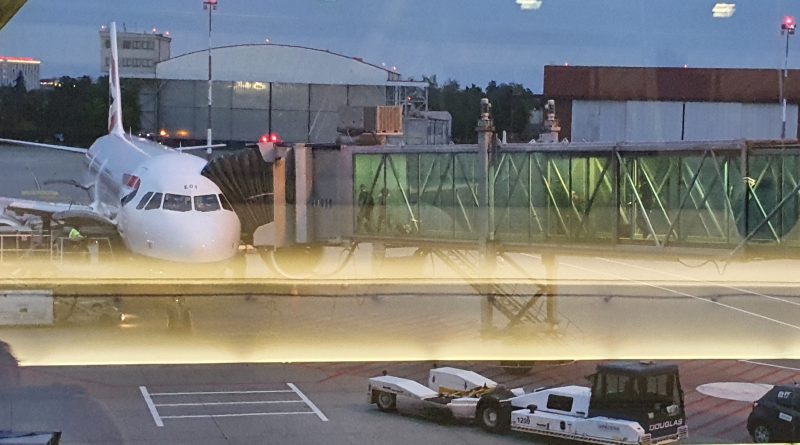 This was the British Airways aircraft in Warsaw, G-NEOY, one of the new Airbus A321-Neo aircraft and this was only delivered to BA on 15 June 2020. It wasn’t the aircraft that they expected to use, but the UK Government announced an end to the travel corridor from Poland and this was one of the last flights back to the UK that avoided this issue. So, the aircraft was entirely full. The gate was busy and the announcements were hard to hear as the tannoy wasn’t very loud. There was boarding via seat row and this seemed sufficiently well managed. The free snacks provided en route, although three customers near to me tried to order food and drink from the Buy on Board service which has been suspended for some months. The crew explained that it was unsafe to serve customers food at the moment, and one customer asked why they were serving food then. It isn’t an unreasonable question (and the crew member couldn’t answer it), although I’m happy with the current set-up.

This was one of the tensest flights that I’ve been on with British Airways and it’s clear that some passengers were on edge throughout. A passenger opposite me who reclined his seated immediately and then hugged the seat in front of him was one of the more selfish I’ve seen, but I was pleased he wasn’t near to me. This same customer also irritated a member of cabin crew who ordered him over the tannoy to sit down after we had landed otherwise he’d suspend the disembarkation process. It was the same customer who talked over the safety announcements and ignored the crew throughout, then seemed confused why he was being called out for standing up whilst taxiing to the gate. I quite liked the drama to be fair.

Overall, this wasn’t an expensive flight as I booked early, although the last few seats were costing hundreds of pounds each for those who needed to return home before 4am on Saturday when the travel corridor option was slammed shut. The problem with this new aircraft is that it’s not very comfortable when it’s at this capacity. There’s not enough space and things such as the at-seat power didn’t work, which it really should have done given how new the aircraft was.

But, having written that, I was just pleased to get back out of Poland given the travel corridor issue, and British Airways didn’t let me down there. The flight was around thirty minutes late in departing due to a delayed outbound flight to Warsaw, but our aircraft arrived just one minute later than timetabled as they were able to make the time up. It was a slight shame that the aircraft landed at C-gates, as that’s a bit of a trek back, but the airport wasn’t particularly busy. So, all sufficiently pleasant, but not my best flight with BA.