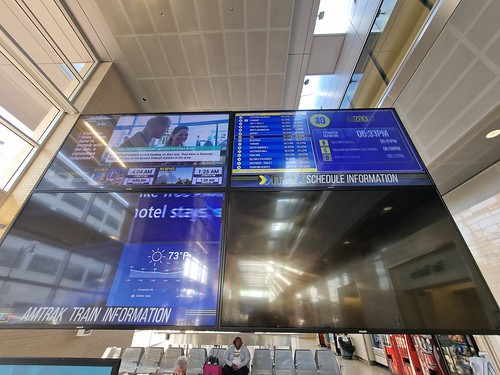 I have more to write about Birmingham, Alabama, but my first impressions weren’t that positive. I think it is absolutely possible to get a sense for any location by judging the atmosphere, how people look at you and just how it feels. Staying safe when travelling relies on some awareness of the environment, so whether rightly or wrongly I do tend to think about my surroundings a fair amount. I left the Amtrak station and I did get the impression that people were looking at me. I’m not normally sensitive to that, I’ve visited 35 or so states in the US and the last time I felt like that was in Baltimore when I accidentally walked to the zoo through an area which wasn’t entirely decadent. I then went to a shopping centre on the way back and felt that the place was completely on edge, very much not a city at ease with itself. That centre was the Mondawmin Mall and a few months later it is where the Baltimore riots kicked off, one of the worst cases of disorder in the United States in recent years.

Anyway, back to Birmingham, but having noted that I don’t usually feel ill at ease as I think that’s relevant. The sheer number of security guards was another sign, they were guarding the Amtrak station, they were guarding the Greyhound bus counters and then had a ring around the city’s bus station. The problem seems to be the number of homeless, not that they’re necessarily concerned about anyone being attacked, but because they don’t want homeless people using these facilities. I have further stories about this from later on during my time in Birmingham, but I didn’t feel entirely comfortable even walking the 100 metres to that bus station.

There’s one photo here as that’s the only one I took, simply as I needed to get the information on the modern display boards to remember which bus I needed and where it was leaving from. There were power points at the seats, but I didn’t feel confident enough to get any devices out to charge them and I just waited not too far from a security guard. I was getting the 14 bus and although it was showing as operating 15 minutes late, I was pleased to see that delay decrease to the point where it turned up on time. There was an eerie quiet in the bus station itself, I never like such an obvious quiet when there are plenty of people around as that’s just not what public spaces are about. It felt like the moments before an exam, where there’s an element of nervousness. One of the security guards was outside shouting at a homeless person who was trying to come in, but at least that broke the silence. There’s some perpetual tension going on in this location as if an invisible force just keeps enough trouble going to ensure that there’s no moment for relaxation, maybe the staff now thrive on that.

I felt oddly guilty sitting there trying to think of a way of passing twenty minutes without looking at my phone. The city had evidently paid out a fair amount of money for this bus station, it was staffed with ticket agents, security guards and it had modern technology and plenty of charging facilities. There had been investment here and the city authorities seemed as though they genuinely wanted people to be comfortable. There are numerous locations in the United States where much less effort has been put into the main bus station facility, so I thought that I should perhaps be grateful. Then a fight started outside, nothing major and it seemed to be two people who knew each other. The security guard went outside to look at it, but he seemed to decide that it didn’t impact on his bus station and so he came back inside. A staff member was mopping the floor, one of the most pleasant cleaners you could hope to meet, she was merrily chatting with passengers as she washed down the already clean floor, she didn’t mind when most of them didn’t respond. I got the impression she had decided to improve the general ambience, but had long since given up with whether the local characters wanted to engage back. I liked her, she lifted that bus station and I noted just how clean everything already was, she was proud of working there.

As for whether I was justified at feeling ill at ease, I too often just keep noting how friendly, welcoming and exciting so many places are to visit. When I’m in Poland, or indeed countries such as Ukraine, Latvia, Lithuania and many others, that’s something I write with alarming regularity. In many states of the US that is also the case, but there’s a clear poverty issue in Birmingham and I only realised later on just how this city has fallen into a tailspin of decline and an almost inexplicable sustained population fall as residents are fleeing to other locations. Birmingham was the 36th largest city in the United State in 1960, it’s now 138th and continuing its decline. And so I feel justified, and indeed I’ll return to this on the blog, because if the residents are leaving en masse then something has gone badly wrong.

Any local who happens to read this will think that I’ve lost the plot and entirely exaggerated that is a perfectly normal bus station. Like a child scared of ghosts, they get skittish and terrified when anything slightly odd happens, however explainable away that incident is. But then again, many of the reviews on-line of this bus station are full of negativity about the staff, the environment and the lack of caring. As a slight spoiler, I have to note here that this blog is most certainly not sponsored by the Birmingham Tourist Authorities. Strangely though, I didn’t entirely dislike it, I wanted to leave to get to my hotel as it was by now soon about to get dark, but I wanted to come back and try to understand why this felt unwelcoming. There must always be a reason and I wanted to find out what it was.