And another of my posts about things that interested me in the rather lovely Museum of Warsaw. This is another remarkable survival, it’s a hand-written note on linen which was placed in a pouch that was put around the neck of a child during the Siege of Warsaw in September 1939. Warsaw was initially able to defend itself during the invasion of Poland by the Germans, but despite the bravery of the Polish military, they were simply out-numbered. Over 18,000 people died in the city between 8 and 28 September 1939 and this tag was so that the young child could be identified if he was separated from his mother.

The young child was Witold Zenon Gadomski, the son of Tadeusz and Rozalia Czerna of ul. Grochowska 365, who was born on 21 May 1939. He survived the conflict and kept his identification until it was given to the museum in the late 1970s. I can only begin to imagine what his mother must have been thinking when she wrote that during the aerial bombardments of September 1939, no doubt complete terror for the future. Whether or not his parents survived the war, I don’t know…. 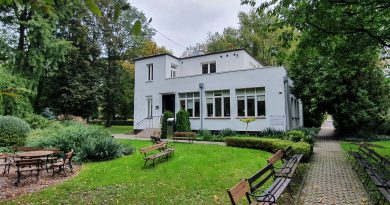