I’ve wondered about Deliveroo for a while, I was nearly knocked over by one of their bikes during the lockdown period and I put that down to the rush to get food delivered. These things happen and it was so quiet in Norwich at the time that it wasn’t unreasonable for a cyclist not to expect many pedestrians.

But, I’ve noticed some strange things, such as a delivery driver collecting food from Five Guys and then standing outside for nearly ten minutes last year. I wondered why that was (and just assumed the customer had cancelled), but a post from Gonzo’s Tea Room today on Facebook has perhaps made that obvious, the driver might have been waiting for another order. I’m not sure that I blame the driver/cyclist for this, it’s not an easy job and in some inner cities it’s downright dangerous.

I’ve checked Gonzo’s are happy for my quote their entire piece, and they were which is much appreciated. I’m also pleased that Deliveroo sent me an explanation within 15 minutes of my asking and so that’s enormously efficient and appreciated (as this blog is hardly the mainstream media), so at least they seem to be taking it seriously now. But, I still wonder about this model of delivery, it’s taking a lot of money from small outlets. Perhaps more importantly, I don’t like the idea that someone saves up for a meal as a special treat and then they’re treated like this, it’s hugely unfair on them and the restaurant.

Hopefully, it was a one-off and standards in Norwich will now return to normal….

“Today we will 100% be leaving Deliveroo. We apologize to any customers who have had to deal with their shit service.

However this statement also comes with a story..

A rider arrived to pick up an order, he was handed the food and we presumed he’d left. TEN MINUTES LATER we found him hanging around outside still, when we asked him what he was doing he said he was waiting for the next order to deliver as well!!! THIS IS WHY YOU GET YOUR FOOD LATE AND COLD NORWICH!! They’re doubling or tripling up deliveries to increase their pay per trip!

The rider arrived and collected his order, on the way out the door he dropped the order on the ground. He then began to pick it up and put it back in the bag when he dropped it for the SECOND time!! The boxes popped open and we think the food might have touched the ground outside so we presumed it did for health reasons.

We immediately confronted him and told him to come inside, we couldn’t dare let that food get to a customer if it was spilled on the ground. However the driver ignored us and literally took off.

Deliveroo does not give us customer details, we literally have no idea where the food went or how to contact the customer.

We next called their head office to complain, luckily we immediately got through to a service agent who contacted the customer and confirmed the food had arrived “cold”.

Us “What about the fact that it was dropped on the ground? “

Deliveroo “Well the customer didn’t complain about that.”

Us “Wait…You didn’t tell them, they’re going to eat meals that were dropped on the ground!”

Deliveroo ” Well, no, not if they haven’t complained”

Us “How would they possibly know it’s been dropped? That’s literally insane!”

Deliveroo ” Well they said it was cold and they were happy.”

Us ” Who’s happy with cold food!? You NEED to tell them it was dropped. They shouldn’t be eating it.”

Deliveroo ” We won’t do anything else, unless they complain”

Every time you order from a restaurant Deliveroo takes more than 1/3rd of the money to deliver it. Almost the entire profit margin is gone into their pocket and this is how much they care about your business and health standards.

During the last few months the world has changed and they have profiteered massively. We know some of you may not be ready to go back out, but please stop ordering from these takeaway giants and if you do feel the need to use their platform, please only use those that use their own drivers.

In saying that, we know companies aren’t all terrible, we know some of their drivers are great people who’ve worked incredibly hard during the pandemic and that controlling every facet of a company like Deliveroo is nearly impossible.

We’d like to invite Deliveroo to make contact we us and we can help them regulate their riders. We want to make sure restaurants can communicate hazards and complaints quickly and effectively. Our goal is to make sure bad food, cold food, tossed food (especially pizzas) NEVER reach a customers doorstep and that the clients that work with Deliveroo are never left with social media outrage as their only avenue to resolving a situation for diners.

( If you think this was your order, please contact Deliveroo and demand answers, we have no way of knowing where it went as Deliveroo refuses to let us contact customers)”

Deliveroo said to me:

They also sent some explanatory material which is reassuring and so I am impressed that they’ve dealt with the issue now. 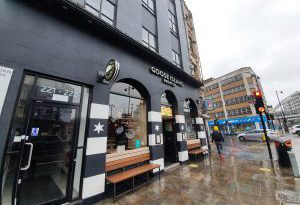