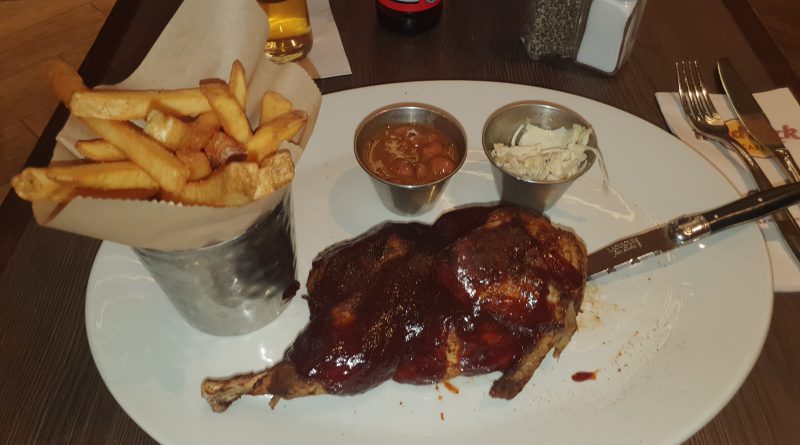 This visit to the Hard Rock restaurant at Marble Arch is from a couple of weeks ago, another funded by a promotion from The Fork. Like another customer, I tried to be seated away from the stage, but they’re not having any of that. This has happened before and I think the staff are privately slightly annoyed that the restaurant is paying for entertainment, this is a music venue and that customers are trying to sit away from it. Fortunately, the music wasn’t too loud and seemed to my highly untrained ear to be suitably professional. I was aware of the restaurant’s limited beer choice before going, but this was a tolerable option. It’s expensive at £5.50 and although I wasn’t paying, that really is at the high end of the scale. There are other options, such as a pint of Heineken which costs £5.95 and a Birra Moretti which costs £6.75. This isn’t a venue that will much care what CAMRA think, but they charge significantly more proportionally for a half than for a pint. The BBQ chicken with fries, coleslaw and ranch style beans. This is a photo of the second meal, as the chicken they brought over on their first attempt was cold in the middle. I think they’re brought in pre-cooked as the chicken was entirely cooked, it was just cold rather than raw. I always have a moment of wondering whether the meal is tolerable to avoid having to waste it and complain, but it was fridge cold in the middle and that was far from ideal.

The staff member was apologetic and took it away immediately, and the wait for a new meal wasn’t too long. The chicken was tender and moist, with the half a chicken portion being entirely sufficient. The chips were the usual fluffy on the interior and firm on the exterior arrangement, with the coleslaw being of a good quality but rather sparsely portioned. For those paying full price, the meal would be £16.75, which isn’t cheap, but isn’t entirely unreasonable given the location and prestige of the restaurant. Although hopefully usually they’ll cook it properly.

The atmosphere in the restaurant was comfortable and the staff were attentive and polite, so the experience was once again positive. The number of offers here seem to be reducing, so I imagine that they’ll be gone nearly entirely in the next few weeks as the number of customers starts to return to normal. Anyway, I’d merrily recommend the restaurant, but would still recommend going on a voucher offer…..