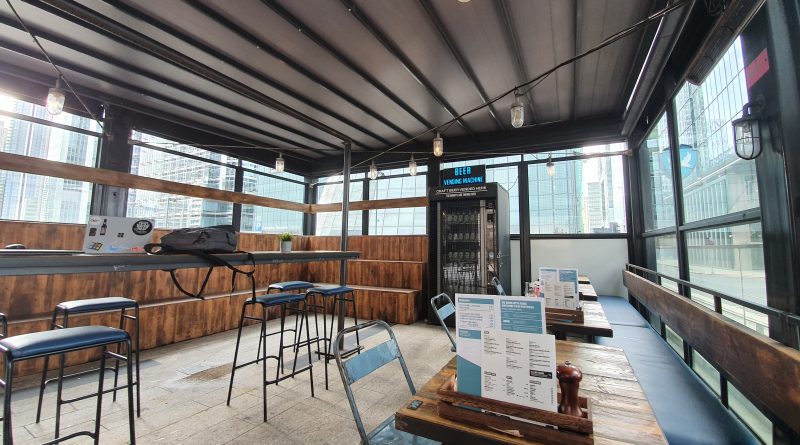 Carrying on with my theme of working around the Brewdog pubs of the UK, this is their outlet at Canary Wharf. As may be visible from the photo, their rolling shutter was broken and so one of their staff had managed to get underneath to get in, but it was impossible for anyone else. This did mean that the inside of the pub was closed, but they could serve customers with the staff getting in and out via the fire escape. So, this was the limit of the Brewdog seating, this covered external area which was actually rather comfortable. There were a couple of other customers during the time that I was here, but a surprisingly small number of customers who tried to get in. This can’t be a good time for Brewdog at Canary Wharf even if they could open up properly. The Velvet Vengeance is Brewdog’s own beer and I’ve never had this one before. Poured badly and in a glass that was slightly chipped at the top, it wasn’t a tour de force from the staff. But, they were clearly in trying circumstances and they were unfailingly polite. There were tastes of chocolate and biscuits I thought, with it all being smooth, although not quite as rich as I had expected. Still decent though and at the appropriate slightly chilled temperature.

So, this was all perfectly OK, although it’s not quite the visit that I had expected and there are of course no photos of the interior. I’m sure that I’ll have chance to pop in again at some point in the future though.