This monument, also known as the Stairway to Heaven Memorial, commemorates those who lost their lives in the Bethnal Green Tube disaster of 1943. It’s a striking monument for what was the worst civilian disaster during the Second World War. During the late 1930s, the Central Line was being expanded from Liverpool Street over to locations in Essex. The construction work had nearly been completed when the Second World War commenced, but there was no track laid and the site was taken over to be used as war shelters. On the evening of the 3 March 1943, there was an air raid warning and many locals proceeded to the station site to find safety. Near to the bottom of the steps down a mother and daughter slipped, which led to people behind falling and then crushing those below. A total of 173 people were killed during the incident, including 62 children, with their names placed on the above panels. Clicking on the above photo should make this readable and it’s an account of what happened on that fateful evening. The press weren’t permitted to write about the incident, although the occasional sly mention got through, as there were fears that it might induce a national panic as well as being damaging to the morale of the nation. A report into the incident was commissioned, but wasn’t published by the Government until 1946. I think this looks quite sleek and elegant, with the main part of the memorial at the rear being an inverted flight of stairs. The memorial was designed by Harry Paticas, who was also one of the key visionaries behind the entire project. He had noted just a small plaque inside the station marking the event and he wanted something more visible, so that the story wasn’t entirely forgotten. These are quotes from survivors and although they’re a little hard to read (both at the memorial and on-line) they add some poignancy to the memorial. A comprehensive web-site was also created alongside the memorial, available at http://stairwaytoheavenmemorial.org/.

There’s more about the incident on this video, from BBC’s The One Show. 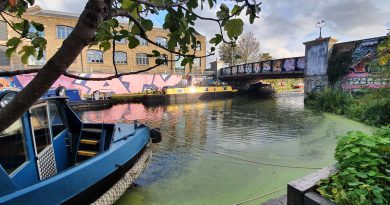