The Travelodge in Hackney is on the left-hand side of this photo (in the building, not the railway station platform as even Travelodge haven’t got rooms that basic), easy to reach from the city centre by bus or London Overground. In terms of noise, I like the sound of trains overnight, but then again, I’ve long since decided that I like urban sounds (I mean in relation to the background noise of a city, not a type of music) such as this to feel the most rested. My tolerance of noise is less liked by some others though judging from their reviews about being kept awake. There is a shared door with Kip Hotels to get into the building, a slightly unusual set-up of two rival hotels with one entrance.

Anyway, let me at least try to paint some kind of picture of the scene on arrival. I entered the reception area and an alarm was going off throughout the building. The receptionist looked stressed, she now had two waiting guests and she didn’t know why the alarm was going off. She ran out of reception looking quite harassed by the situation and went to investigate why her hotel wasn’t working properly. It’s not an ideal welcome to be honest.

Then a man with his two sons (or I assume they were his) came into reception and it’s fair to say that these children were not the quietest that I’ve ever encountered. The receptionist comes back at this point and apologises for the wait, but she says she needs to keep investigating as she can’t work out why an alarm is going off. At this point, the man explains that his two kids might have been the cause of the alarm due to a tripping incident near the lift. This was a relief for the receptionist, she now knew why her hotel was broken. She disappeared off to try and turn the alarm off, but she seemed pleased that she understood what had happened.

Another staff member appeared, who was a sea of calm in a reception where two children were running around screaming and an alarm was going off. She dealt with the customer in front of me and ensured he was content, before trying to assist the man with his two children. I had by this point moved out of the queueing arrangement to stand near the wall, which stopped the two loud children running around me. The man kindly mentioned that I had been first, but I’m a helpful sort of person and I let him go ahead as he needed a new keycard. This altruistic behaviour of mine was, if I’m being honest, also useful to discover what part of the hotel the kids were located in so that I wasn’t near to them. I have a feeling that the receptionist guessed this, I was placed on the ground floor which was as far as possible to have been placed away from the kids.

I’d add that the children weren’t bad, but they seemed to be quite loud and I like the noise of trains and traffic, I’m less good with the sound of exuberant children. Anyway, I digress. The bedroom was fine, it’s not the largest Travelodge room that I’ve had, but it met my requirements. It had a door, a window that opened, a ceiling, walls, a bathroom, a carpet that didn’t stick, clean bedsheets, a desk, a bin, a kettle, towels and a light. There are quite a few requirements there, but I think that some of them are quite basic needs. And, I heard no more noise either internally or externally until I checked out, although I’m unsure how many guests there actually were in the rest of the building.

I didn’t see any staff members when checking out and if it wasn’t for the excitement of check-in, I feel I might have found the whole experience just a little unnotable. This room cost under £20 for the night, which is ridiculous for a London hotel the week before Christmas. But, we live in interesting times…. 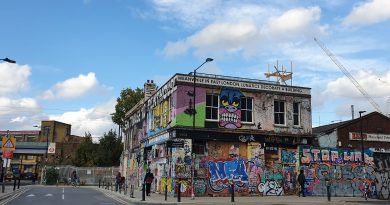