I think this was my fifth stay at this hotel, it’s a handy and convenient option for getting flights from Gatwick Airport (or what I call convenient anyway). I suspect the hotel would have wished I hadn’t booked two nights before my flight from Gatwick Airport in April, as I’ve postponed this stay on three occasions and had to contact them to ask why it suddenly got cancelled entirely a couple of months ago. But, they fixed the issues and all was well. Then, when I was at the hotel, I decided I want a different room on the second night. Although they were no doubt annoyed at me, they managed not to show it, which is a definite plus. The reception area and where the breakfasts would usually be served. I actually quite liked their breakfasts in the past, they were basic but entirely satisfactory, but they’ve been replaced now by grab bags until the current health crisis is over. This was my first room where I should have been for two nights. It’s in the crypt of the building (well, cellar, but I prefer the word I’ve used) and I didn’t much like it, although the design is fine, as there was a slight smell of damp. But, the room was well ventilated, with the option of opening the window and using the air conditioning, so all was well there.

Well, until the room next door moved in, which involved a birthday party, what seemed like endless numbers of guests and banging of doors. I don’t know the rules on this at the moment, and nor did I check, but it wasn’t ideal. Headphones get rid of most of these issues, although they were pushing their luck a bit here in the neighbouring room. But, to be fair to them, the hotel hasn’t got door dampers on and it absolutely should have done.

Anyway, I tolerated that situation (I don’t like conflict at the best of time) and hoped the guests wouldn’t be there the next day. I popped back to the room in the afternoon of the second day and the noise situation didn’t look like it’s improve. One woman shouted loudly to another guest “make sure you put your clothes on for when the food arrives” and after something like thirty door bangs which shook the room over the next ten minutes, I decided I wasn’t going to risk this debacle continuing. So, I had to do what a typical British person hates doing, which is to actually complain rather than tut silently about the situation.

Now, I wouldn’t normally expect a hotel to say this, but since they did I assume they’re content for everyone to know, not that I’m one for gossip. But they told me that the room was occupied by a doctor and this seemed to be a first attempt to negate my complaint. I did add that I didn’t know if the guest they now had in was the same as the night before, although their pattern of behaviour was little different in terms of noise. I had by this point given up on the room, despite the suggestion they’d speak to the room occupant. I’m not sure that’s the best idea in these circumstances, as I don’t know what the occupant might think of that. To be fair, the manager did agree to a room change without my needing to ask for a third time, so all was well. And I’d add that this is the first room change I’ve requested in at least the last 100 hotels that I’ve stayed in (I had hoped for one in a hotel in Warsaw as the room was a bit small, but I didn’t ask for that) so I hardly make a habit of this. The second room, I liked this one (and it had a desk that was useable). As an aside (another one), I discovered that the air conditioning switched off if the window opened, which isn’t a bad policy. I was pleased I had moved, I much preferred this new room and there were no noise issues. There were clearly some minor damp issues as the hotel had painted over them, but it didn’t smell of damp and I was entirely happy. And, as a bonus, the shower in this second room had a choice of temperatures, where the first room was locked into just offering a scaldingly hot water temperature. The breakfast on day one, this isn’t a bad little effort. The milk is quite hard to open, so the easiest solution is to use the straw to pierce the carton and try and drain it from that. I say easiest, it was still a slight challenge, but that helped me wake up. And a little variety for the second day.

So, overall, I can’t much complain about the hotel as the prices were towards the lower end of the scale. They do though perhaps need to look at the internal noise of doors slamming, but otherwise, there were no huge problems. I’m not sure I dare stay again, but I wouldn’t suggest that there are any reasons why others shouldn’t. 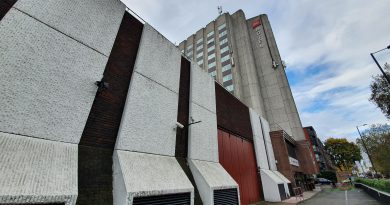 One thought on “London – Croydon (Borough of) – Ibis Styles”