A few days ago I posted about the experiences that Andy and his team had with a murder of cows (I know that it’s a murder of crows, but I like using the word for cows too) charging and galloping towards them, and he’s been kind enough to send more details about his team’s adventure (Andy mentions with many thanks for Dawn for much of the text!).

I like the line “Dawn thought she’d test the water and questioned why were they doing it” and that rings some bells for me on our 100 walk a few weeks ago. I suspect that Nathan and I didn’t talk enough about why we were doing it, perhaps as secretly neither of us knew the answer other than it seems a good idea when drinking in the pub. The phrase of “testing the water” is an excellent one though here, very brave of Dawn  🙂

On another point, this whole thing with trackers is interesting. The LDWA are looking into various forms of trackers for future 100s and there’s clearly lots of work needed here to establishing what will work best and be the most reliable. But, back to the main point, congratulations to the bravery of everyone involved in this walk!

Anyway, the story of Team Barandaw in Andy’s words:

The journey began back in October 2019 when Andy Gordon, Barbara Hutton and Dawn Jones met on a White Cliffs Ramblers walking holiday to Majorca. Andy had recently completed the Sussex Stride and was looking forward to taking on Y Sir Fynwy 100-mile challenge to be held in 2020. Barbara and Dawn were full of admiration and a little disappointed that they would be unable to tackle such an adventure without a qualifying 50 under their belts. Barbara, Dawn (and Andy for good measure) hastily signed up for the Spring into Lakeland challenge event for April 2020 in the hope that if there were still places available, they may be able to squeeze in to do the hundred.

But the pandemic struck and both events were put off until 2021. Oh well, undeterred the plan was to still try for a 50 event and the Bullock Smithy was pencilled into the diaries as indeed was The Tour de Trigs, an event not taking place until December so surely that would go ahead, surely the pandemic would not still be playing havoc with these events? As history unfolded one challenge after another was postponed or cancelled. But out of the disappointments came the chance to tackle the Y Sir Fynwy Virtual challenge without a qualifying 50, what a result. The Tour de Trigs had needed them to form a team and have a name and that is how Team Barandaw came into being. Later they referred to themselves as the Barandaw Goats when they noticed they were all sporting Hoka One One Speedgoat footwear.

Taking on a 100-mile challenge as novices meant planning and training. Dawn’s husband, Steve, was enlisted to support them around the route at various checkpoints. It did not take long to realise that an elongated or linear route would be a lot harder from a logistical basis and so the decision was made to walk the Canterbury Outer Ring modified to 26 miles and do 4 loops, with the 4th loop being a bit shorter which helped psychologically. Covid-19 restrictions meant the Team couldn’t all walk together in the early training preparations. The route was recce’d and modified around areas considered dangerous to tackle in darkness or when tired. Various day and a night lap were walked, finally culminating in a 60 mile day and night combination which was the furthest any of the Team had walked before and all came up against a bit of a wall with sleep deprivation. 4 main checkpoints were identified where supporters could park. The Team were offered more support from Keith, Barbara’s husband, who took on the role of supporting Steve and keeping an eye on the trackers that were hired to see the Team’s location and John Gilbert, who has undertaken various LDWA 100-mile challenges over the years and nobly manned a couple of checkpoints at very unsociable hours. It should be mentioned here that Sarah Turner also with a few 100-milers under her belt made contact and offered valuable advice.

The day arrived and Team Barandaw was well prepared. They set off at 8am as planned and the first loop went without any hitches. Jacket potatoes at the lunch stop and a coffee and cake mid-afternoon. Barbara had already started to be aware her feet were uncomfortable. The second loop included having a very pleasant meal at the Golden Lion, Broadoak, where the accommodating landlady was ready to put the food on the table as they arrived with thanks to Steve and Keith in giving her the heads up when the Team were 10 minutes away and the food choices already made. So far, so good, the Team set off to walk through the night but with a welcome hot drink and plenty of snacks provided by John Gilbert around 11.30pm. The night walk brought the extra challenge of long wet grass and soggy feet, this will be addressed with different footwear for any future 100 milers! The Team in their planning had walked the route at night but they had dealt with sub-zero temperature and next to no grass – what a difference 4 weeks can make.

6am, an hour later than planned, Steve and Keith met the team and disappeared off to walk the dog with instructions to not return for one hour but to make sure the team were awake after an hour. This gave the team a chance to sleep in the van – in their planning this was considered necessary – in reality Andy snores which fortunately both Dawn and Barbara saw the funny side of. The sun was shining, and the Team were ready for another day. 56 miles completed, over halfway and only at 23 hours. The Team were doing OK. Barbara’s feet were giving her some problems, but she soldiered on. The next stop, only 4 miles along the route was a superb breakfast, cooked in the field expertly by Steve and Keith. The rest of loop 3 went without complications, but as loop 3 was ending and with less than a whole loop to go, Dawn thought she’d test the water and questioned why were they doing it? – what was making them carry on? – did they need to? After all, they had clearly done enough to qualify for next year’s 100 and it was only a badge! Well, even with Barbara’s poorly feet Dawn was put right in her place with a very emphatic chorus of ‘we’re not stopping now’. She hadn’t meant to sound so serious – it was only posed as a question, but it was good to know they all still wanted to complete this challenge. A decision was made at this point, as they were running later than their original schedule, that they would have dinner in the next pub, so Keith and Steve were called to meet them.

The Team were now about to start lap 4 – it was going to get dark again and head torches were sorted out, yet another change of socks – Gortex lined footwear this time to deal with the wet grass for Dawn and waterproof socks for Barbara who’d had to resort to sandals to cope with the blisters. Andy’s feet were doing remarkably well, and he swears it was down to the constant sock changing and the ‘Udderly Smooth’ cream he was using. The Team knew they had to dig deep now to get through the last 22 miles. Some family members who had been following the trackers and realised the team were stationary at a pub close to where they were driving paid a very welcome timely visit to cheer the team on. Dawn also took a phone call from her daughter who said ‘Mum, we (me and the children) are going to meet you at your next checkpoint – what time will you be there?’ After a quick calculation the Team set off with an extra bit of excitement knowing that Dawn’s family were travelling from over an hour away to be at the next checkpoint. Little did the Team know what awaited.

Just before the checkpoint was a series of 4 fields. The 2nd of these had cattle in which the Team had walked past 3 times already. The account of the stampeding cattle has already been written about but for anyone who has not seen the article it’s probably worth a read. This was a freaking scary experience, possibly made somewhat more heart wrenching for Dawn who had her daughter and grandchildren attempting to enter the field from the other end of the footpath whilst the cattle charged across the field. Thankfully with modern technology and a mobile signal the Team established that the family had made it safely out the field their end, but the Team were in the middle of the field being stared at by angry cattle looking ready to charge again. The Team turned around and Dawn and Barbara found enough energy to run …. Andy was more controlled with his exit from the field and thankfully they all got out in one piece. Now, with family that had travelled for an hour to see them and a field of dangerous cattle between them some quick rerouting had to happen. A permissive footpath leading to another footpath (albeit not well used) was followed and eventually the meeting with the family took place.

The Team now needed to get to one more important checkpoint, the last at 91 miles. Here the Team were met, along with Steve and Keith and hot drinks etc, by two very good friends, Jan Hartopp and Jim Cheney, who at the unearthly hour of midnight were willing to walk the last 10 miles and keep the spirits up. There was a surprising amount of chatting and good humour, and it was only as the Team approached the last couple of miles that they realised the trackers they had hired had not managed to record the walked distance. This knocked the team for 6. Whilst they had planned the route meticulously and knew the mileage they had walked; the trackers had been unable to deal with the altered last loop and had not recorded the actual distance. It also transpires that because a tracker only sends a signal every two minutes, it takes a straight line between each of these points and because this route involved lots of twists and turns the route recorded by the tracker missed sections actually walked.

Each team member also used a Garmin watch, and they had a separate GPS device. As anyone who has used them will know, keeping these gadgets going over a long period takes some doing as the battery does not support recording for 48 hours without needing to be recharged several times. Fortunately, Dawn was meticulous with her battery management, setting alarms to remind her when to recharge, and her Garmin watch kept running for the entire event and at the end recorded 103.17 miles.

The Team reached its destination to find John had turned out at about 4:30 am to greet them. As soon as they stopped walking Barbara and Andy’s body temperature plummeted and they demanded to sit in John’s van with the heater full on. Soon the Team were whisked off to get a shower and some sleep before reconvening for a celebratory Champagne brunch later in the day.

As this account is being written Team Barandaw have had their evidence validated and are in the planning stages for their next adventure. Bring it on. 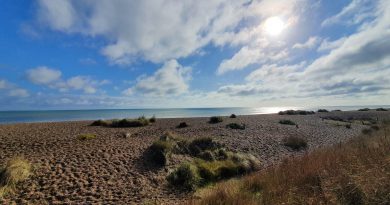