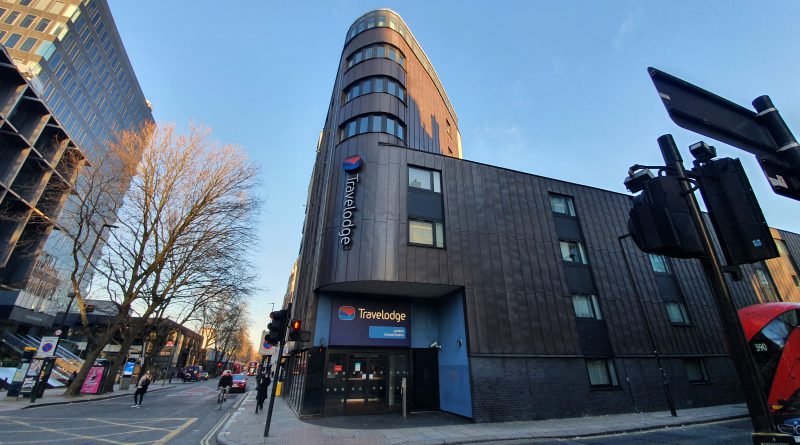 Travelodge had an offer on a week or so ago which was get one night half price when booking at least two nights, which meant that this hotel became really quite affordable despite its central location. It’s literally a one-minute walk from Euston railway station, and around five minutes from King’s Cross St Pancras railway station, so ideal for those needing to catch a train.

When I entered the hotel I was surprised and delighted to see that they had ripped up most of the floor, and even more surprised when I left to go out two hours later and they had restored the flooring. Whatever work they were doing, the tradespeople were very efficient at least. The staff member at reception was helpful and everything seemed in order, other than I struggled to hear her amidst noises of the floor being ripped up. No mention was made of breakfast or the cafe, which was of no relevance to me anyway as I wasn’t using them, but I was slightly surprised there was no upsell tried. Although, to be fair, the staff member already could hardly hear themselves think with the sound of their floor being ripped up around them. The room is standard Travelodge fare, but actually it was entirely satisfactory and I had no complaints. The window opened and the air conditioning was very effective, something that I don’t necessarily expect in budget hotels. There was a bath in the bathroom, another feature that many hotels lack. I was given the quiet side of the hotel, although I don’t mind road noise, but reviews of the hotel are littered by complaints about the sound of traffic keeping people awake.

The hotel has started to renovate its rooms and they have the SuperRooms which you pay a bit extra and get a decadent coffee machine and a KitKat. I decided against going for such luxury. I didn’t have any noise problems internally or externally, despite this seeming to be the most common complaint from guests.

As for the reviews, the staff are being creative with excuses and not blaming Covid for shortages:

“Rooms are unvacuumed and dirty. Toilet is dirty. Shower curtains ( bleurgh) Rooms are sprayed liberally with air freshener instead of cleaned and it’s suffocating. The reason, apparently, is ‘Brexit’.”

“Finally, on the second night when I was getting out baby ready for bed, the fire alarm went off. I scrambled to get us both semi-decent and grab the essentials, then ran down to the foyer. I didn’t take the room key as I thought there was a fire tearing through the building. The fire alarm stopped on the way down. I reached the foyer, and stood there, with a half-dressed baby and myself shoeless, for 20 minutes with no sign of staff.”

“I spent half of my time going down to the reception to complain about something.”

There are over twenty reviews of guests who have been given keycards to already occupied rooms, something which I still think is unforgivable incompetence from a hotel. I merrily barricade a room with a chair behind the door to try and prevent such things, but I’d be demanding my night be refunded should it ever happen…. Fortunately, it hasn’t (although it has to Nathan, he gets all the excitement….).

Although one customer was livid about a series of things and noted:

“We advised of the issues and all they were able to do was give us a handful of free Kit Kat’s, not exactly a suitable response.”

That would have won me over…..

Anyway, I liked this hotel as it was central, clean and quiet, although I likely won’t stay here again as it’s normally relatively expensive. I understand that there are some rooms in the cellar and that doesn’t sound ideal, probably best to try and refuse those at reception if possible.