After a busy day of visiting museums and the like, I thought that I’d work through a few Good Beer Guide pubs in Leeds tonight. I can’t say that I was thrilled to see that my first choice was owned by Greene King, but I thought that I’d still give it a try. It’s a traditional pub and it’s well looked after, so it felt a clean and comfortable place to be. It was also full, so the first time in quite a while I had to prop myself up at the end of the bar (that’s quite easy to do in the first pub of the evening). There were six beers to choose from (although there might be eight judging by that back board, but I could only see six), which is usually an exciting number to see at any pub. None of them really excited me though, and I’m disappointed to see such a load of generic beers on there with a limited range of beer styles. However, I have to accept that the pub was full and so they clearly know what they’re doing, it’s just I’m hopeful of something a little more decadent. Whilst I was at the bar though, every single order was for lager, so perhaps I should be grateful that there were so many real ales to choose from. The Tetleys beer was well kept and tasted as it should, which isn’t really overly exciting. I rated it as 3.25 on Untappd, which was perhaps generous, especially given its average rating is 2.96 (from 15,000 reviews) which is a very low score. The price was though low for my half pint, so no complaints about the cost of the beer.

I can’t say that there was anything wrong with the pub, but nearly everyone seemed to be watching the televisions and the beer selection wasn’t for me. I prefer pubs that are powered by conversation and atmosphere and this one didn’t do it for me with that reliance on the televisions. However, the staff were welcoming and I’m sure it’s a safe environment which serves its customers very well. I can see why this has gone into the Good Beer Guide, as the welcome is genuine, the interior is traditional and there’s a choice of reasonably priced real ales. 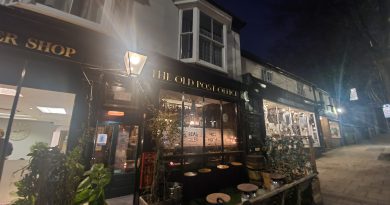