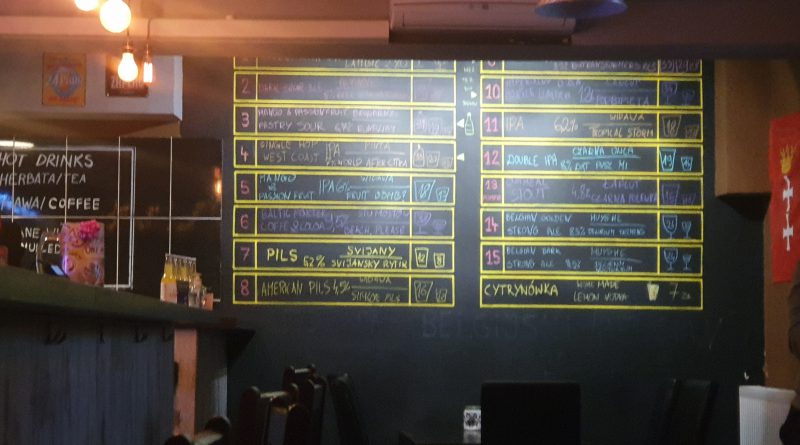 There are a fair few craft beer bars in Gdansk and this is one that I don’t think that I’ve been to before, a cellar bar in the centre of the city. It’s not unusual for venues here to be creative with their names to get the word beer or similar into the title, this is another quirky choice. That’s a really rather lovely blackboard full of exciting drinks across a range of different beer styles. The bar is visible on entering, with a few seats at the front near to the door and then a longer section that goes off towards the rear. It’s inevitably a bit dark given that it’s in a cellar, but there’s nothing wrong with that set-up, as the Hop and Vine is one of the best pubs in the UK…. The staff member came and lit a candle for me at the table as well which added some extra light. There were some tempting, and expensive, darker beers, but since it was lunchtime I thought that I’d be measured and stick to some lighter beers. This is the Runaway, a fruit sour which was better than I had anticipated with rich flavours of mango. Some of the beer prices, particularly for darker beers, are expensive by Polish standards, but the quality is high and that’s entirely understandable. I liked this bar, it had a welcoming and inviting vibe, important for every venue, but perhaps even more so for arrangements like this, when it’s a cellar bar where people aren’t quite sure what they’re walking into. The prominent blackboard and engaging staff member added positively to the whole experience, and there were plenty of seats available. A well thought beer menu with plenty of choice and the live list is available at https://labeerynt.ontap.pl/. If Poland had a Good Beer Guide, this pub would be in it (and apologies if it already does have an equivalent guide….)