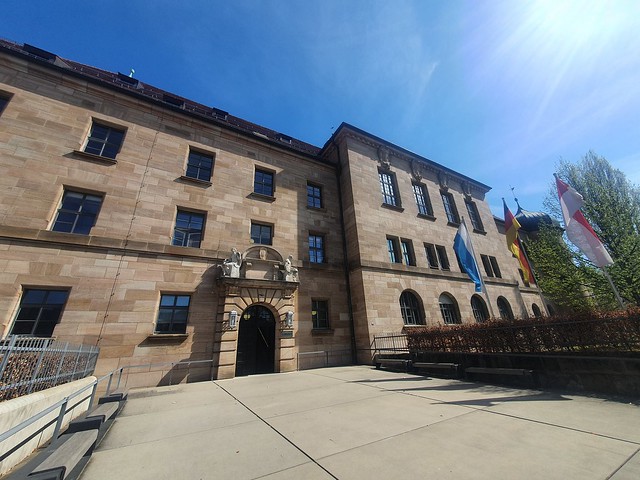 Nuremberg has a difficulty that when talking about its history, many people might mention the Nazi rallies that were held here, or perhaps the Nuremberg war trials that took place after the end of the conflict. That window at the top right might look innocuous enough, but this is the room where Nazi leaders were tried in what were initially some very controversial war trials. The building is the Palace of Justice which was constructed between 1909 and 1916 to hold the city’s courts, located a little outside the centre of Nuremberg. Given its location meant that it avoided the worst of the bombing, it proved to be a suitable building to hold the court trials in. 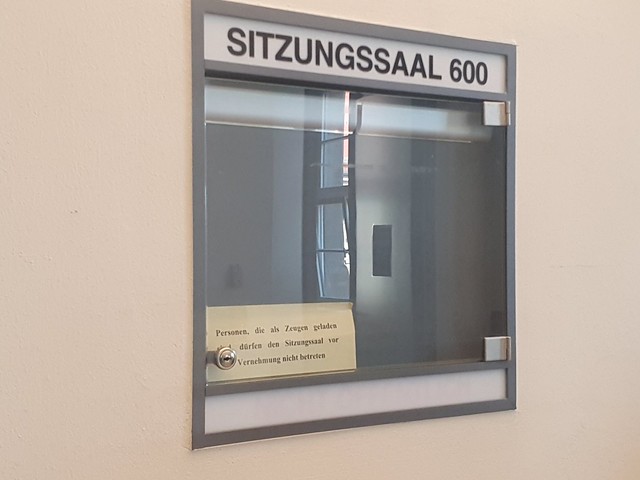 After the Second World War and its use in the judicial process, Court Room 600 was transformed back into being used for domestic trials. There were numerous Nazi structures across the city and there was a concern that they would become almost shrines to evil in the future, alongside no real expectation that they would become tourist destinations of broad appeal. 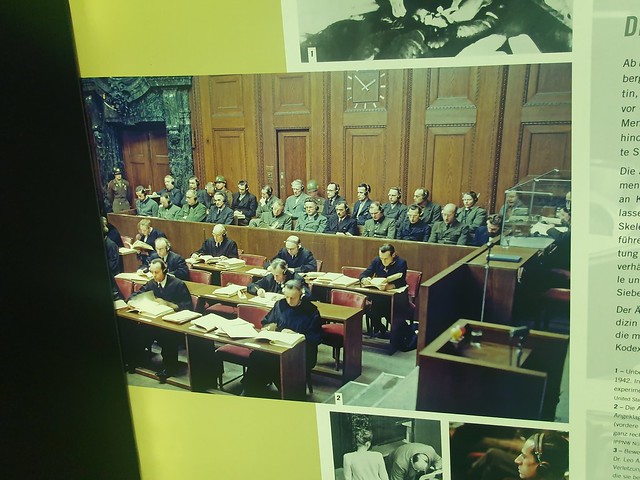 This is what the court room looked like during the trials. 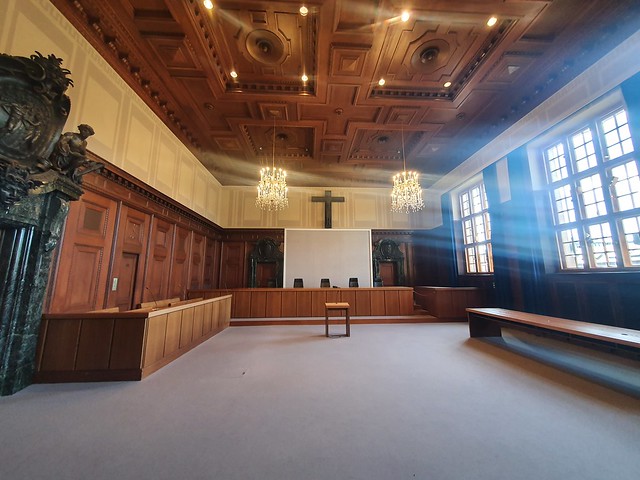 And this is what I saw when I visited. There have been some layout changes to where the judges now sit, but otherwise the room is nearly the same as it was when the war trials took place. The Nazi leaders sat on the left of this photo, it’s easy to align to the two photos by noting the location of the grandly decorated door.

It was odd standing there, knowing that some of the most senior Nazis had been sitting there for weeks and months during their trials. I’ve visited so many concentration camps, war cemeteries and war memorials, and the question of “why?” must have been asked so many times by those dragged into the war, whether directly or indirectly. That question could have been answered by the men and women who sat in those seats in the numerous war trials that took place.

For visitors today, they start their visit by buying tickets on the ground floor and they’re given an audio guide and told that the museum is on the first and second floors. Most visitors will visit the court room on the first floor and then go to visit the substantial museum displays on the second floor. I, however, visited the court room, went back downstairs to get the audio guide I’d broken repaired and then back to the second floor. I’m not keen on audio guides, as I have a track record of either breaking or jamming them, but there’s such a wall of text in the museum that they needed a way to offer translations in numerous languages. 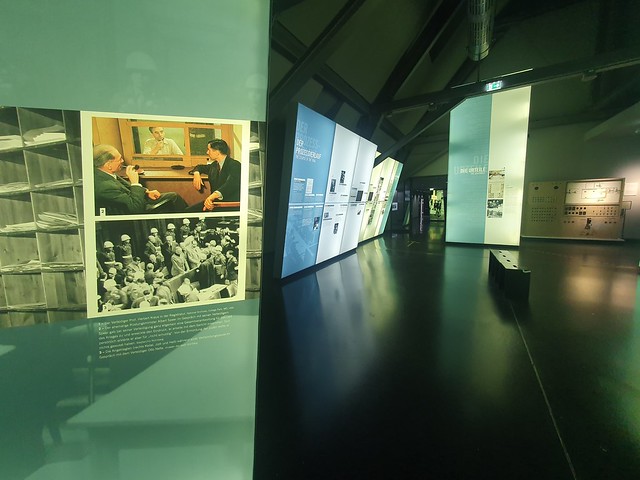 There were roomfuls of these displays, which were informative and well presented with plenty of photos and video screens. The audio guide was designed to sync with the video displays, so visitors could hear English (or their local language) when watching videos. It didn’t always work and there were some glitches with the audio guide, but it worked sufficiently well to be able to understand the story that was being told. For those who don’t speak German, this is going to take a while to work around all of the displays, but there are many stories which justify taking that time. 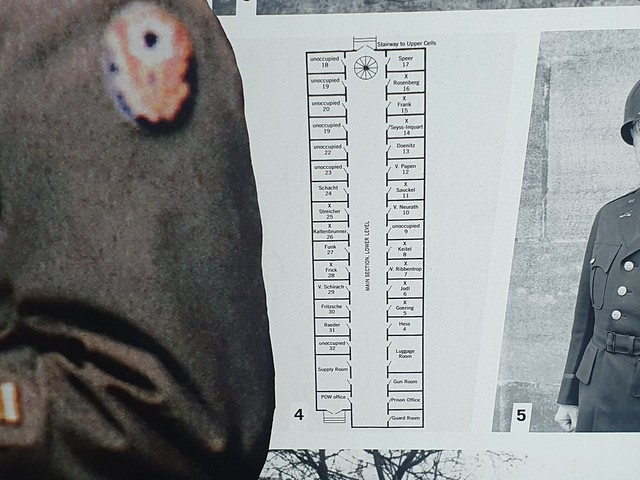 Another advantage in their choice of building to hold the trials is that there was a prison located behind it, where the Nazis were placed in cells which were individually guarded to ensure no-one could kill themselves. The plan of the cells survives. It would have certainly been a comedown for men such as Hermann Göring who had acquired great wealth, art collections and grand properties. Göring was sentenced to death in the trials, but killed himself the night before he was due to be hanged. A temporary structure was built between the prison cells and the court rooms, with substantial amounts of security to prevent anyone escaping or being attacked. 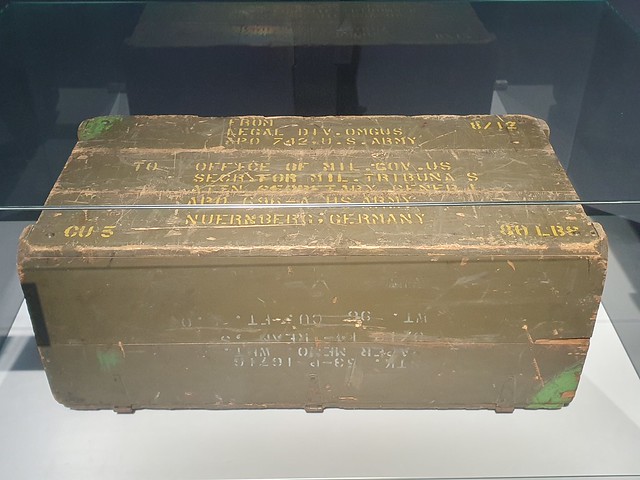 There are very few exhibits in the museum, it mentioned that this was a deliberate decision although I slightly suspect that was because they don’t have many things to show. This is one of the packing boxes for documents used in the trial, of which there were apparently literally millions. 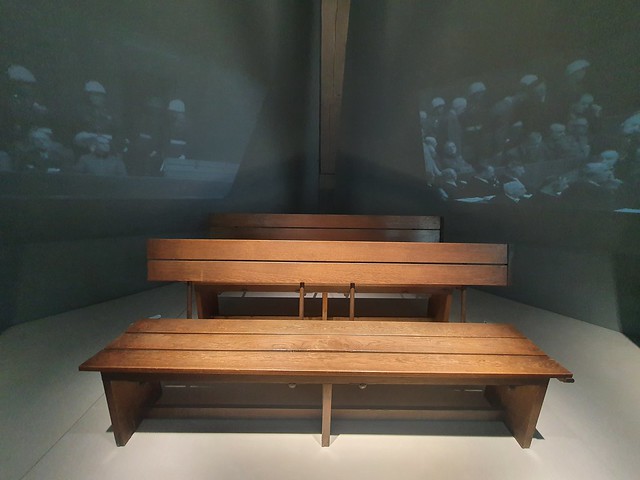 One of the benches that was used to seat the war criminals. I think they would have been suitably impressed by the functionality of these without being over-designed, although I decided not to ponder for too long what Rudolf Hess might have thought when he was sitting there. There were several different trials, but the one which is best known is the first one which took place between 20 November 1945 and 1 October 1946, where 24 of the most important Nazi leaders were tried. I won’t go through each name, there’s a comprehensive list here.

I spent a couple of hours in the museum going through the displays, which started explaining the reasons for the trials and how the location was chosen. They then went through the main trials, before then working through the numerous subsequent cases which were heard in the building. One thing that I hadn’t realised is that the German people started to feel that the trials were taking too long, so the authorities had to rollback their plans to avoid the population starting to sympathise with the Nazi leaders and those who had been guilty of crimes against humanity. It’s fair to say that vast numbers of people got away with their crimes unpunished, there were just too many people involved in the apparatus of evil. However, short of trials lasting for many years, it was hard to see what options the allies had. To put a scale on this, the United States had arrested just under 100,000 people for war crimes and they wanted 2,500 to face trials, but eventually only 177 were tried by the courts. 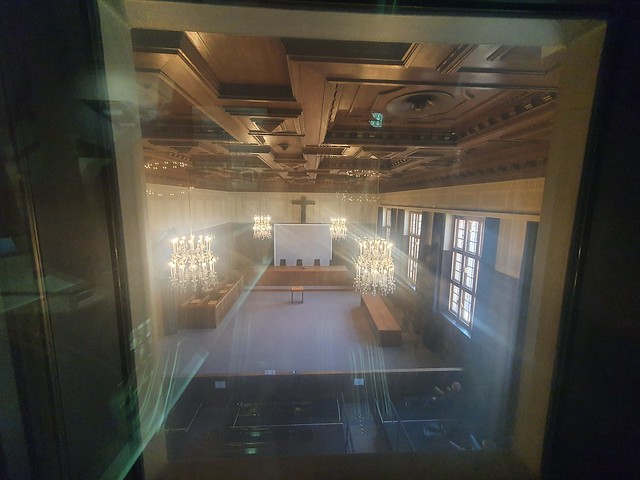 This is the room above the court, where filming would have taken place. The back of the court room has been brought forwards a little, it once went back slightly further to fit in the number of press and observers that needed seating, but it’s broadly the same otherwise. 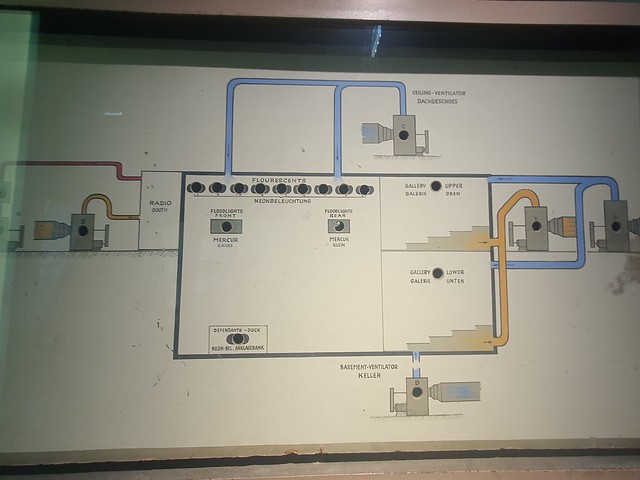 The televising of the trials presented some challenges, as the court room wasn’t designed to be something akin to a theatre. Some changes were quickly made and this is part of the original video and sound board which was brought in.

Much is changing at the museum later this year, as it’s closing for them to build a more substantial exhibition. The number of visitors has continued to increase and the city authorities want to ensure that the story of the court room is told in the best way that they can. For the last couple of decades, the work of the court has had to be intertwined with the needs of the museum, which has meant that the court room has been closed whilst trials took place there. This disappointed visitors and rather undermined the reason that people went to see the museum, so the decision was made recently to stop trials from being held there. I’m not sure, but I suspect they’ll re-order the court room so that visitors can see how it was laid out during the war trials, although it doesn’t really take much imagination for visitors as it is.

I felt that I saw what I needed to see at this museum, there was access to the court room and it was quiet throughout the building, a dignified environment. It’s clear that the museum needs more space, they’ve had to tuck the ticket desk into a corner of the ground floor, and the first floor is used by the courts themselves, although it seems that they’ve moving out in the near future. Everything was presented in a respectful manner, never glorifying war and tackling some of the trickier issues in a coherent and approachable manner. Although I’m not usually keen on audio guides, it worked well after I broke it (and they fixed it) and they’ve got the contents on-line for anyone who wants to listen.

I’m not sure that I really had any more answers to “why?” from the museum, but that’s for the good, as this museum didn’t try and focus on the defence statements made by Nazis. There was never really any defence for their war crimes from those in the dock, mostly just blaming each other and saying that they weren’t individually responsible. Three of the key figures had already killed themselves, namely Hitler, Himmler and Goebbels, with nearly none of those indicted being remorseful for the crimes that they were involved in.

The trials lasted from 1945 to 1949, an important part of German history and it was never inevitable that agreement would be reached for the cases to be heard at all. It created a precedent for future war criminals to be punished for their crimes, but it’s clear that crimes against humanity continue to take place around the world and there’s no perfect system to deal with them. That theme is explored by the museum, perhaps raising the most important question of all, which is how to stop this from happening again.

Tuesday : A Meander Around Nuremberg