I’ve never been to Uxbridge before, but since it was just a thirty minute journey away by a direct TFL bus, I thought it’d make for an interesting day out. The bus journey was uneventful and I discovered something new (to me) this week, which are Hopper Fares in TFL, where you can have unlimited bus journeys for an hour for £1.65. That’s the same cost of a single ticket, and although it didn’t make any difference to this particular expedition, it’s handy when changing buses.

I felt the need to pop into Uxbridge library, although primarily as it was a handy place to sit and get some work done, especially since they also had power available. It feels well financed, it has numerous floors and plenty of places to sit and seemingly quite wide collections of books which is always handy in a library.

Then to the Good Yarn pub operated by JD Wetherspoon, which I thought seemed well run and friendly. The reviews are about average for the chain, with this one perhaps being my favourite:

“Ordered chicken wings tonight and the doorman ate them, I went to the bar to ask where they were as we has waited so long and the bar person said the doorman took them.”

Anyway, I won’t get overly distracted by those reviews, as for me, the highlight of the day was yet to come.

This is the Battle of Britain Bunker, around a twenty minute walk from the town centre, which was absolutely the highlight of my day. It’s a combination of a large museum hall and then a tour of the nearby underground bunker. There are 102 photos from my visit at https://flickr.com/photos/julianwhite-uk/albums/72177720298105658 for anyone who wants to trudge through them all. For the most part the museum section was empty with no other visitors, which made me appreciate more that they’d opened it at all during the week, all operated by Hillingdon Council. The museum itself is relatively new, part of a major investment in the site that was made over the last few years. 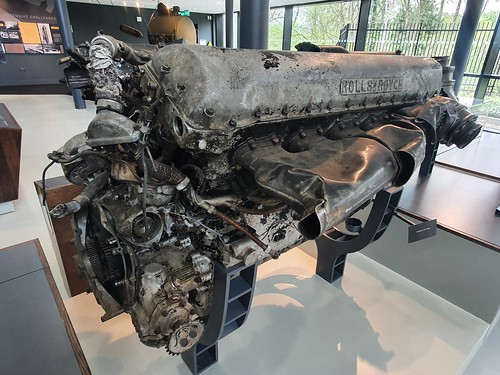 The Merlin engine produced by Rolls Royce, from a Hurricane aircraft that got shot down on 7 June 1940, although the pilot Flying Officer Peter Beverley Robinson of No. 601 Squadron survived. 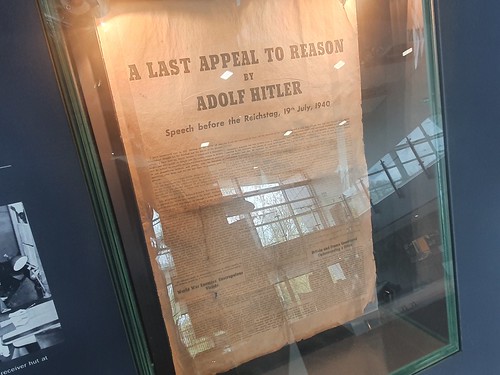 These leaflets, of a speech made in Reichstag on 19 July 1940 by Adolf Hitler, were dropped across Britain by the Luftwaffe. 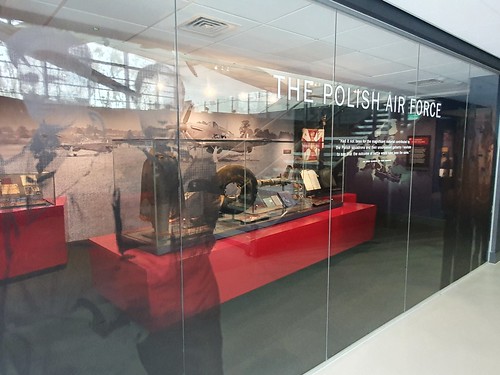 I’ve long thought that if the British were ever in difficulty, it’s the Polish army that I’d want to call on first, a phenomenally brave military that I was delighted to see were honoured here for their contribution during the Battle of Britain. 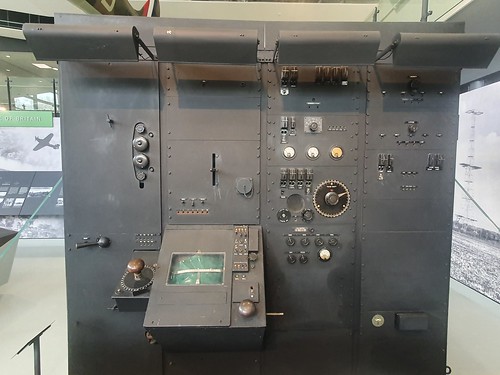 A chain home receiver, part of the ring of coastal warning defender devices, of which more about at https://en.wikipedia.org/wiki/Chain_Home.

After 45 minutes or so of looking around the museum, it was time for my pre-booked tour of the bunker. There were meant to be five people on my tour, but four of them were late, which meant that for over half the tour there was just me on it (well, and the guide obviously). The guide was knowledgeable and informative, showing me the outline of the bunker above ground before we descended into it. 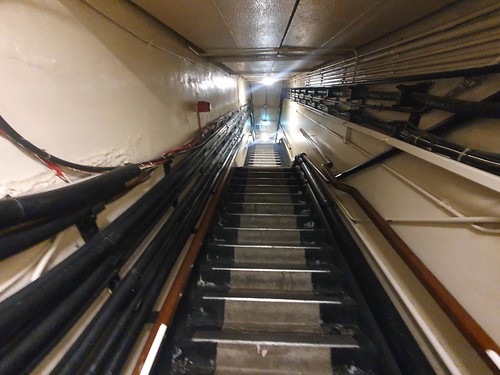 There were two sets of stairs to walk down, at right angles to each other in a bid to limit any damage from an overhead bomb. The secrecy though worked here, the site was never targeted during the Second World War, it was kept a complete secret from the Germans. Those large fat pipes are the original communications that came into the bunker, they’re numerous phone lines bundled together. 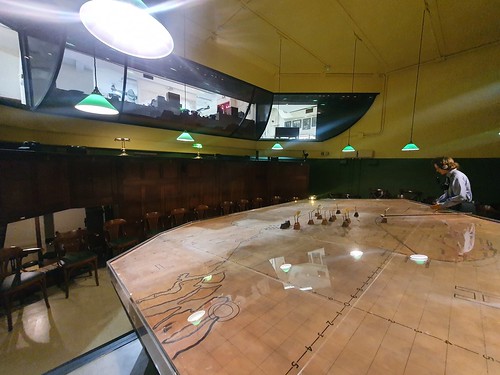 The map room, the centre of where everything happened. There would have been thirty or so people in here, with women moving the pieces on the large map table which showed where aircraft were. That allowed the commanders, sitting in the area above to the left and then above them in the gallery, to make decisions and to summon planes into the air. This room is pretty much untouched from the Second World War, as the whole set-up was kept by the Ministry of Defence after the war and this area was sealed. 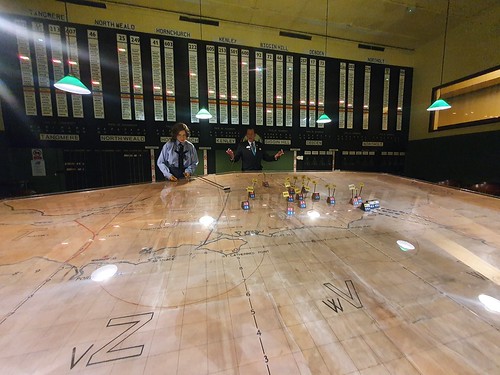 One thing that isn’t original is the board behind the guide, that is from the 1970s as the previous one had been removed. He explained how the board worked, it looks quite complex, but it is actually based on simple principles. 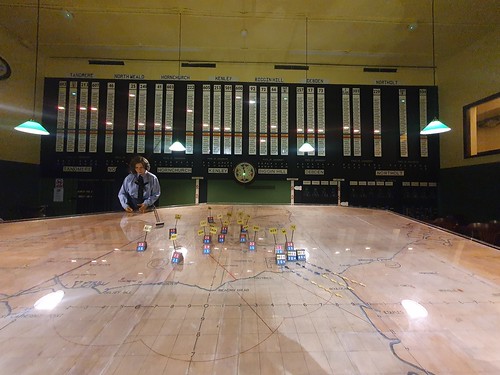 The numbers on the table indicated which aircraft were in the air and also the number of them. The arrows were replaced on a regular basis, indicating the direction that the aircraft were travelling in, so that this was always an up-to-date picture of events. The tour guide explained the whole process, I was impressed at just how much information was available to the decision makers. 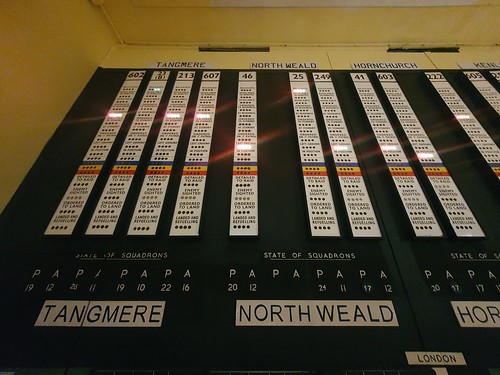 A close-up of part of the board behind the map table, with each one representing an RAF base. 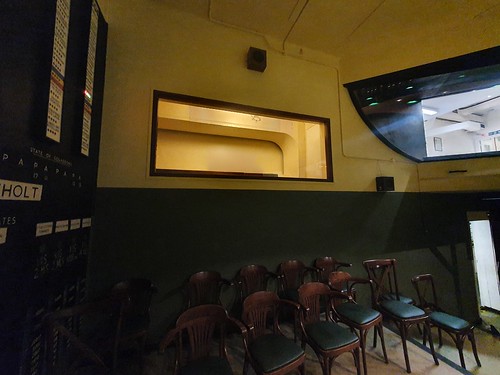 Our present Queen has apparently only visited this location once, and that was when she was Princess Elizabeth during the Second World War. They built this little box so that the King and Queen could see what was happening, but King George VI couldn’t understand what was happening and so asked to move so that he could feel a little more involved. Winston Churchill also came here, in the room to the top-right of this photo, and after leaving the bunker he said in his car, “Never in the field of human conflict was so much owed by so many to so few”, a famous line that he repeated in the House of Commons a few days later.

The map table from above, from the room where Churchill sat. The tour took us all around the location, I felt that they had opened up just about as much as they could for visitors. There was another little museum arrangement here that we were given time to look at. 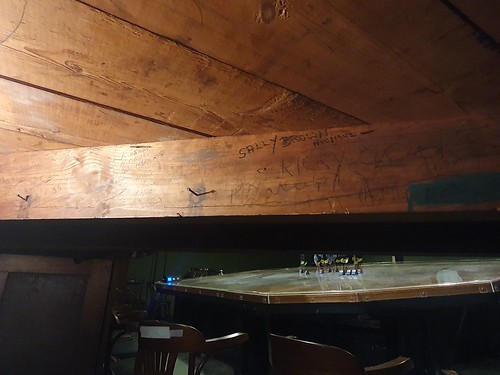 The guide mentioned that I could duck under the gallery to see some of the signatures signed here by staff who worked here during the Second World War.

All in all, this was a fascinating couple of hours, well worth the £9 fee for the museum and tour. As mentioned above, there are plenty more photos at https://flickr.com/photos/julianwhite-uk/albums/72177720298105658 for anyone who has the time to wade through them. I’d say that it’s well worth a diversion to come here, there’s plenty of car parking (not of relevance to me) and it’s not too far to walk from the town’s underground station.

After all that excitement, I thought I’d go for a little meander and this is Fray’s River, partly man-made and named after the fifteenth century landowner John Fray. Uxbridge is quite a pleasant little town, it feels quite wealthy, although I’m sure it has its fair share of problems.

The Grand Union canal also cuts through the town, built to get goods shipped between London and Birmingham.

St. Margaret’s Church in Uxbridge, which has become something of a traffic island today, but there has been a religious building here since the early Norman period. The oldest extant part of the church is the north tower which was constructed in the fourteenth century with a decision made in 1788 to shove the new market hall right beside it. The church was faffed about with in the Victorian period during one of their major restorations, although most of the interiors were removed in the late twentieth century.

I popped to the library again at this point, before hearing a commotion outside the building. I heard the staff telling police that there had been trouble caused by a gang of youths, who had by that time dispersed. There was something ironic about being in the Prime Minister’s constituency on the day that he had been fined for law breaking, it wasn’t clear whether the youngsters were using a similar defence of saying they had accidentally broken the rules and were very sorry. Anyway, I won’t digress into politics.

And with that, I jumped on the bus back to the Ibis Styles (by jump, I mean step up carefully), an impressive bus service which runs every ten minutes or so, seemingly 24 hours a day.