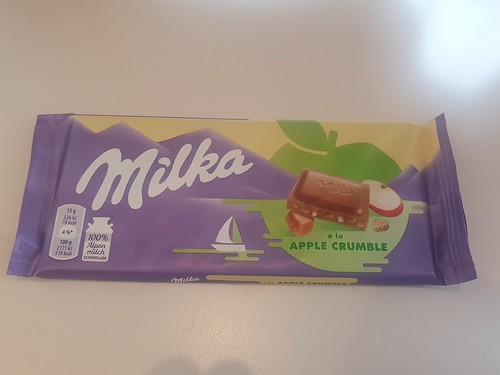 Irrelevant aside for the day, this was 40p in Lidl, I very much approved. Nuremberg can certainly surprise and delight when it wants. 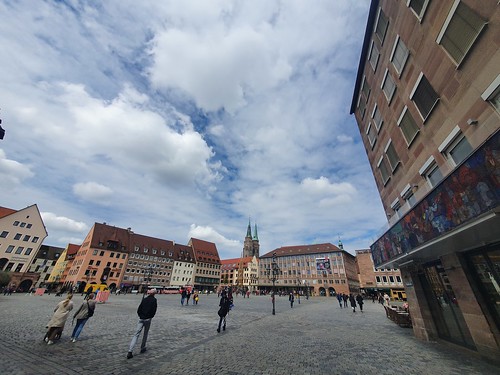 The city’s main market which had been cluttered up with the Easter market for much of the time that I was there. I say cluttered, but I’m sure shoppers adored the range of products that were available and seemingly most targeted as tourists. 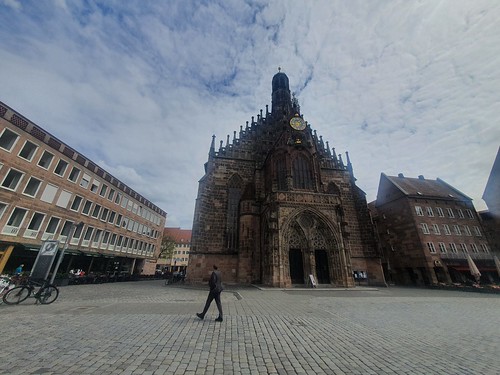 Frauenkirche which was constructed between 1352 and 1362, on the site of a Jewish synagogue which was destroyed by the locals. It was Catholic until 1525, then Protestant until 1810 when it became Catholic again. The highlight of this church for me is the daily display at 12:00 when the little figures come out from under the clock and have a little wander about. 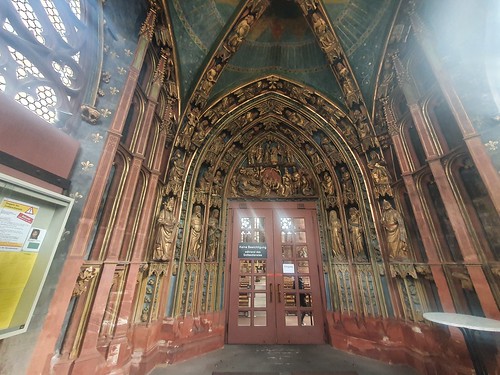 The decorative doorway, which is as far as I got as there appeared to be a service on. 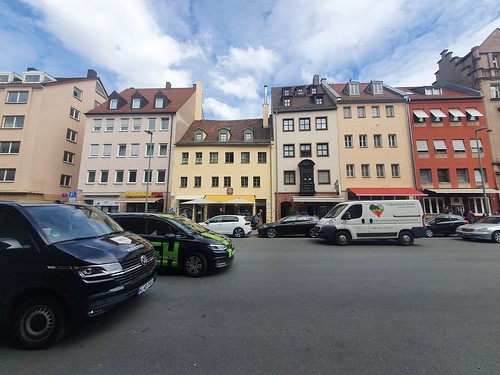 After some faffing about on my behalf, I decided the best lunch available to me was likely to be at Guerilla Gröstl Foodhouse. 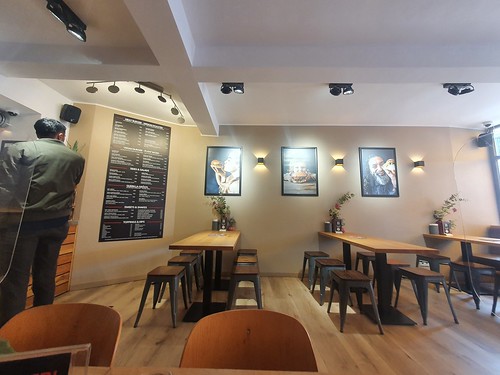 A clean and organised interior, with a staff member being very helpful as my German was proving to be quite hopeless, as I’m sure I inserted three different Polish words into the mix. 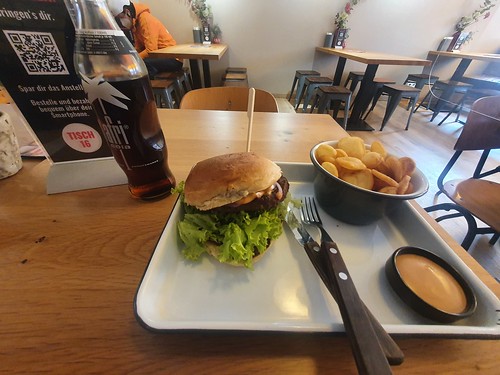 And this suitably surprised and delighted me, the potatoes were crisp and well, circular. The burger was meaty, rich in flavour and the the salad element wasn’t too overpowering. All very satisfactory and I’d recommend a visit here, all laid-back and welcoming. I really wanted another burger, but that seemed to be a little greedy. 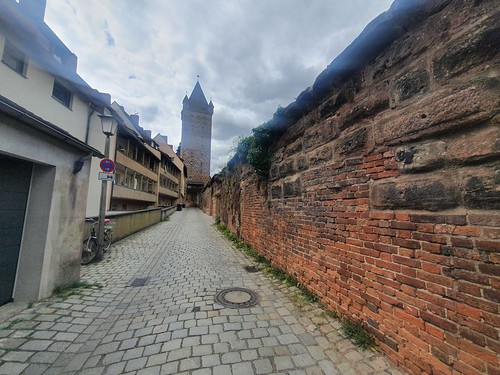 Oddly, the airport seems to be trying to keep secret that it’s possible to walk from the city centre to the departure gates in around an hour along what is quite a beautiful route. There’s no signage, but the route is on Google Maps and the section nearest to the airport is off-road. 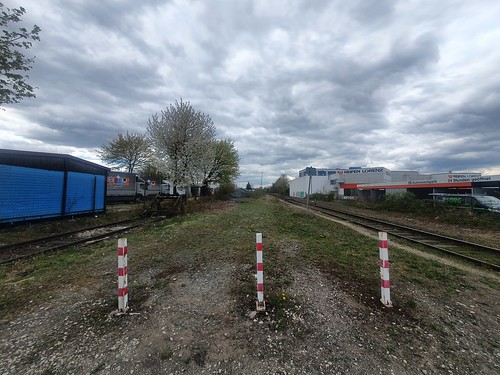 This isn’t the route (unless you’re a train), but the path does cross a railway line. These walks are always sometimes slightly risky insomuch that like Heathrow, it’s not possible to make the last section on foot. However, it all looked on Google Maps to be free from obstruction to pedestrians and I was pleased to note that proved to be the case. 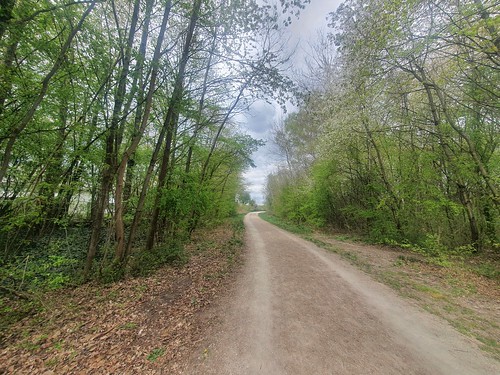 This is what a fair chunk is like, very peaceful and a pleasant stroll in the countryside. 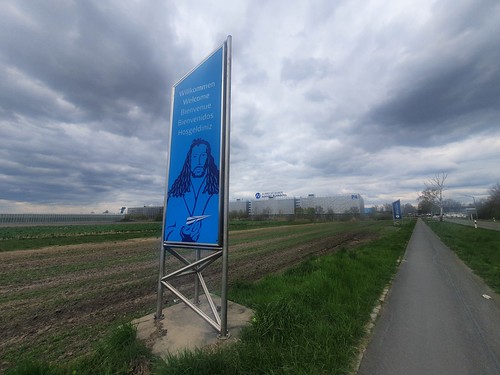 Soon enough the airport comes into view. I know that my friend Richard couldn’t do this as he couldn’t wheel his extensive set of luggage along here, but for anyone with hand baggage only I think that this is quite a pleasant walk. 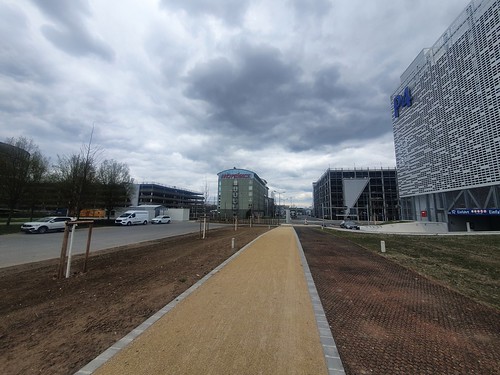 There are numerous buildings being constructed around the airport, although the paths are still clear. 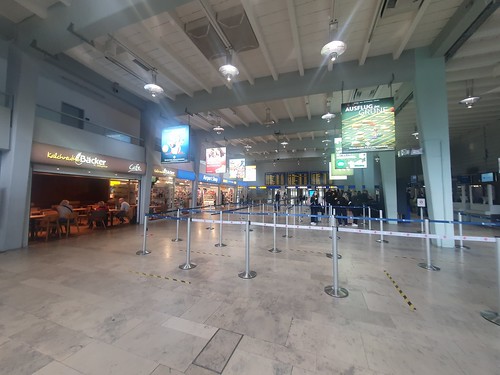 Nuremberg Airport doesn’t have the technology for boarding passes to be issued by the airline or via kiosks at the machine, so I had to wait for the BA desks to open. The airport is dated and really needs knocking down and it’s devoid of any facilities such as power points and comfortable seating. Two people came to me during the time I was sitting with my laptop in the main part of the terminal and asked if there were any power points for them to use. I suppose I just look like an oracle, but I had to tell them both I had already tried to do that. 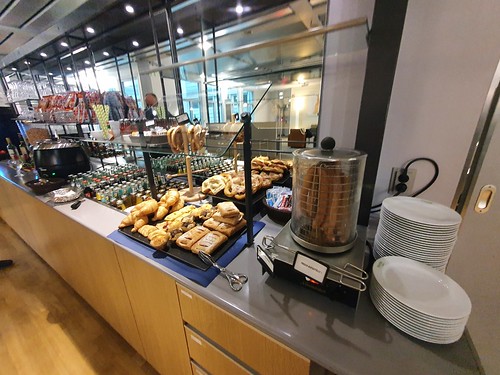 I had access to the Dürer Lounge and so I diverted there to wait for boarding and was pleased that they had power points. The lounge reviews are mixed, but I liked it, with friendly staff, a clean environment and an acceptable range of food and drink. 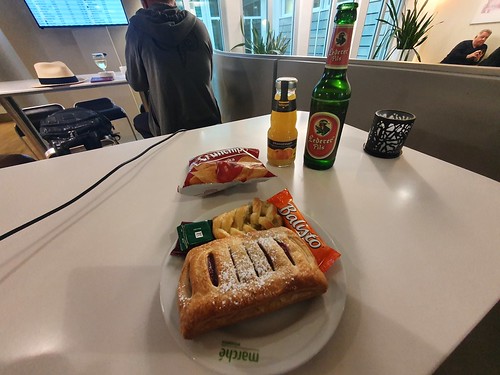 Pastries, beer, chocolate and crisps, I had absolutely no complaints….. 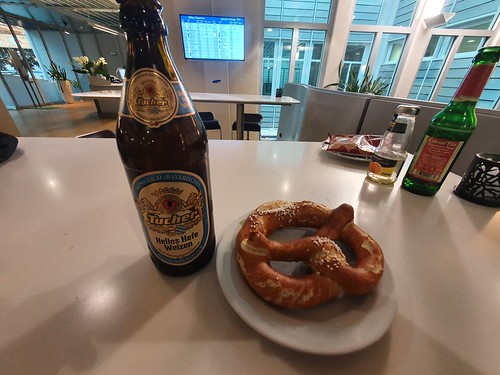 How Bavarian. I could have sat here for some time, but my flight called…. Just before I was leaving there were around 20 footballers who came in all looking smart in tracksuits (I think footballers can look smart in those as it’s a natural attire) and if I knew about football I might be able to say if they were an important national team or a local Sunday league set-up. For a lounge though, this is one that’s worth paying to get in I’d say, even though I got in free care of British Airways. 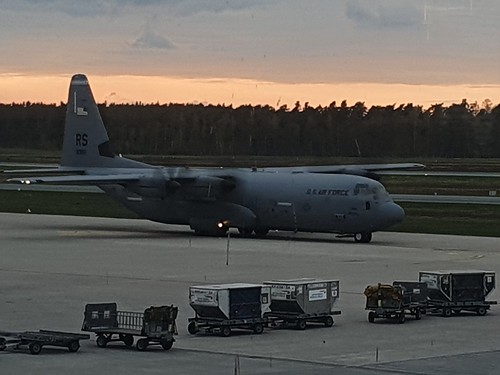 I assume that these military planes were doing something relating to Ukraine. It’s always a distraction to see two different US military aircraft coming down the runway, but I’m easily excited to be honest. 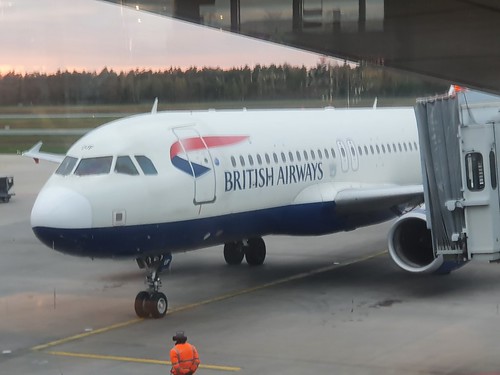 Slightly blurry, but the arrival of the British Airways aircraft, G-EUYN, which was slightly late in. 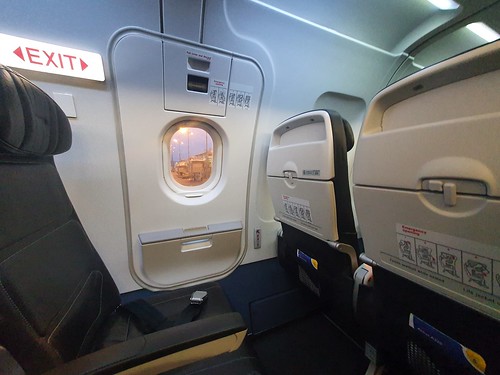 I had an exit row seat and all went well with the flight. The crew were friendly and helpful, but not helped by passengers at the rear of the aircraft shoving their bags in the overheard lockers near to the front. I was hoping for the entire row to myself, but two brothers came to sit down just before boarding was complete, but they were well natured and didn’t annoy me. The aircraft landed at Heathrow T3 and it took me only around ten minutes to get from the gate where we landed to the central bus station, so that was efficient progress. 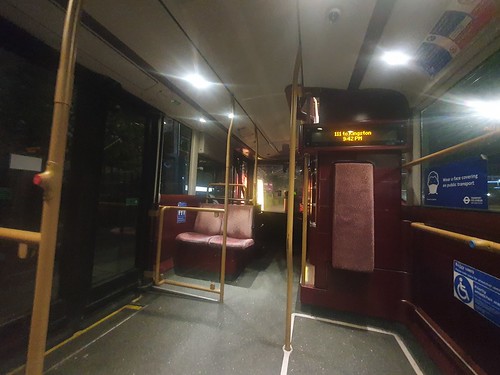 A quick 111 bus to the Ibis Budget at Heathrow, where I’ve never stayed before. The reviews weren’t very good, so my expectations were low so I was ready to be pre-annoyed. The hotel seemed busy and the receptionist was trying to be polite to some rude customer. 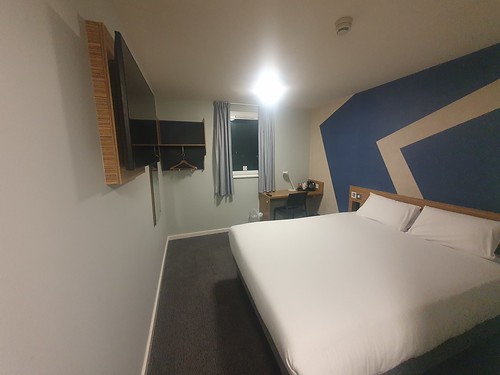 It was actually a perfectly serviceable room and I was delighted to see a fan in the room. A lot of the problems with the negative reviews have been because the air conditioning doesn’t work and the windows don’t open, which is a combination that usually annoys me as well. But, since it was an April evening that wasn’t that hot, the combination of a moderate temperature and a fan worked for me. 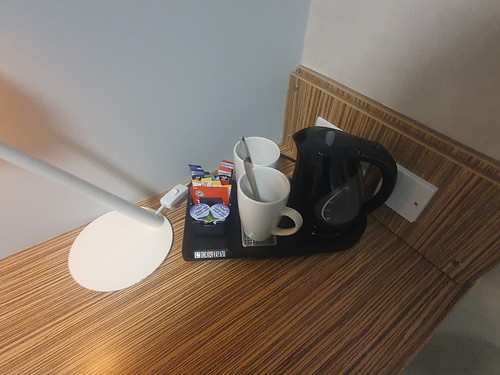 Unusually for Ibis Budget, they’re now supplying hot drink facilities in the room. Quite a contrast to the Ibis hotels in Germany, a level up and they didn’t supply anything. Anyway, I was content with the room and I had arrived at a reasonable hour, so all was well. Keen observers of this blog (which I accept is quite a narrow audience) might note that this looks like the wrong decor for an Ibis Budget (this is the sort of irrelevant detail that only my friend Nathan would notice because he’s odd and annoying like that) and they’d be right, because this is all Travelodge decor and furniture. The hotel was rebranded from Travelodge to Ibis Budget in November 2021, the second airport hotel at Heathrow to do this (although the other is split between Ibis Budget and Ibis). Rather than rip everything out, Ibis Budget have left it in and really done very little else.

I mentioned I’d add something about Nuremberg, which is perhaps the European city that I’ve been most disappointed with. I won’t dwell on this as I’ve indicated why in previous posts, but the city feels badly governed as far as tourists are concerned, there’s no signage, there’s too much vandalism and the atmosphere felt on edge at times. I accept that this is similar in places such as Naples, but I had expected that in advance, I had expected something a little more decadent in Germany. The Nuremberg Card for tourists is also a clunky arrangement, with excellent coverage of museums but they only issue it in time periods of 48 hours, and the city needs more time to explore than that. It felt a city very uneasy about itself, and it’s clear it’s only now taking its Nazi period more seriously with the complete overhaul of the two major sites, the rally grounds and the war trials museum. I won’t also claim there weren’t very exciting moments as well, I enjoyed all of the museums, the castle area was picturesque and the walls walk was interesting, with some excellent customer service in places. It’s certainly a city worth visiting to see its excellent museums and heritage, and I’ll return to Bavaria in what will hopefully be the near future to see Munich.

I’m sure all of my two regular readers won’t be surprised for me to add that Nuremberg wasn’t even in the same league of professionalism as Warsaw, Gdansk or Krakow. I feel those cities understand visitors and they are very much at ease with themselves. I will stop comparing everywhere to Poland though, I suspect I’m taking that whole thing just a bit too far.