As if the morning’s bravery zip-lining wasn’t enough, we had decided to go paddle boarding as we hadn’t done that before. I’m not very good at balancing, unless it’s in pubs where I’m world class, but I was already astounded at my own bravery so far in the day. 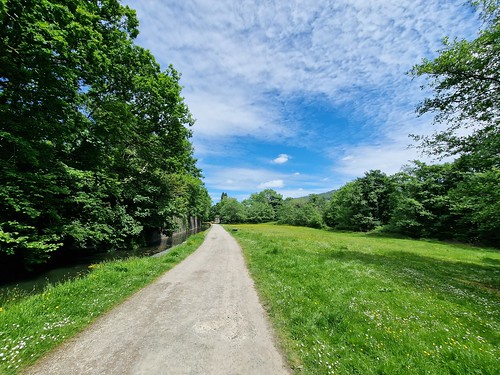 The walk to the paddle boarding place, which also hires out kayaks and canoes. 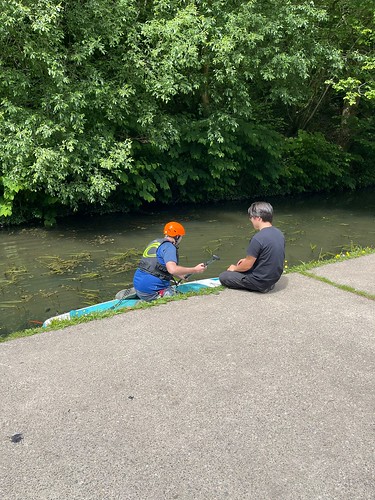 Mounting the paddle board, or whatever it’s called. This is effectively white water rafting, but I only took photos of the flat bits. I left my phone and the like in the upmarket changing facilities (a container unit) of the paddle boarding place, so Liam took this photo. I was too nervous about dropping my new phone into the water on the rapids section of the canal. 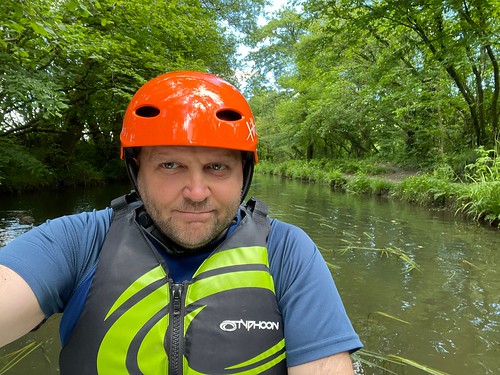 After some interesting manoeuvres I managed to get Liam’s phone to take photos of myself, although I was concentrating very hard on not dropping his phone into the water. I did record numerous videos of Liam doing his paddle boarding thing, although if anyone wants to see these, they’ll have to contact him as they’re still on his phone and he doesn’t feel the need to have a blog droning on in excessive detail about what he’s been doing. 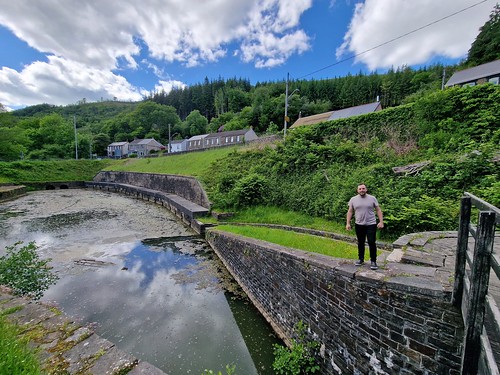 Liam at Resolven Lock, by the River Neath. 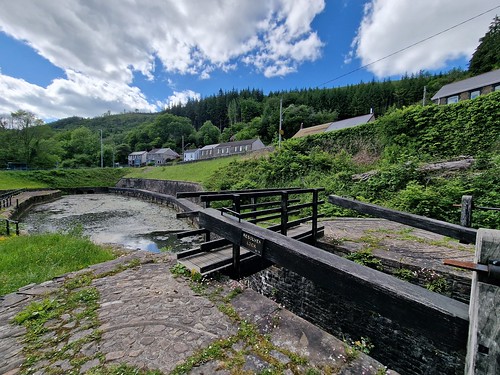 The lock on the Neath Canal. 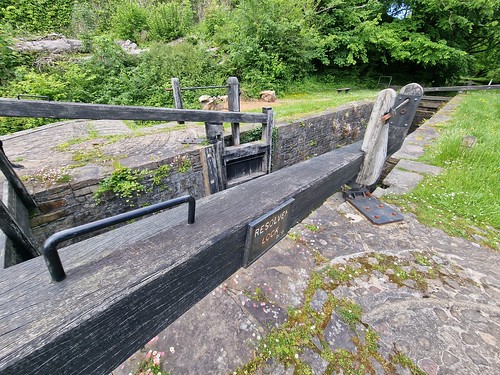 I’m not sure that this equipment is much used now, navigation ceased in the 1930s, although sections of the route have been kept open. 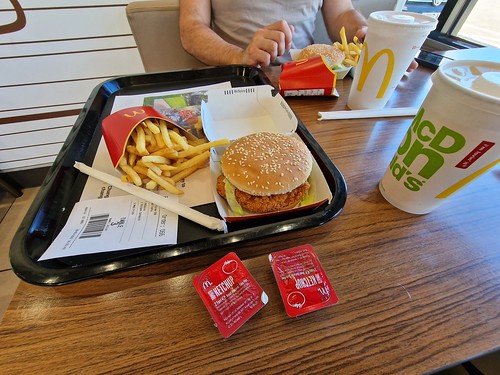 I had an offer on the app so this McDonald’s was cheap and we only had a short time, otherwise we would have hunted down a decadent local restaurant. We had wanted to investigate some historical sites in the area, but our hotel was in Daventry, where the prices were very reasonable, and we had a meal booked in Wolverhampton. 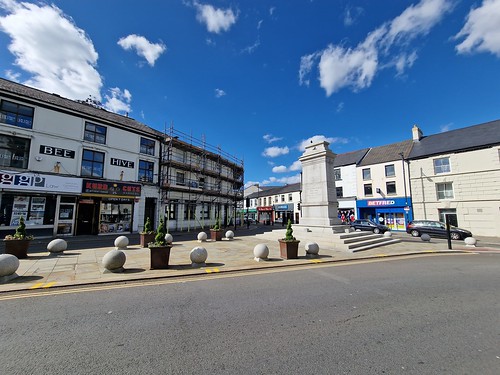 We did have time to pop into Aberdare and this is the war memorial, unveiled in 1922. It also has the details of Lance Corporal Phillip Anthony Sweet, who died in the Falklands War forty years ago. 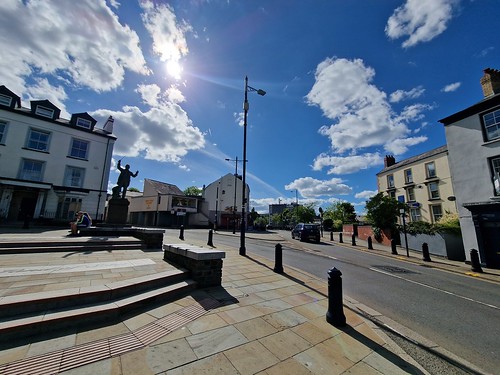 The magic of Aberdare. 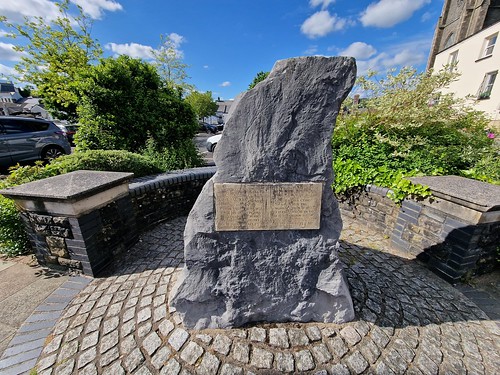 This stone commemorates the life of James James (Iago ap Ieuan) who composed the Welsh National Anthem and is buried in a nearby cemetery. 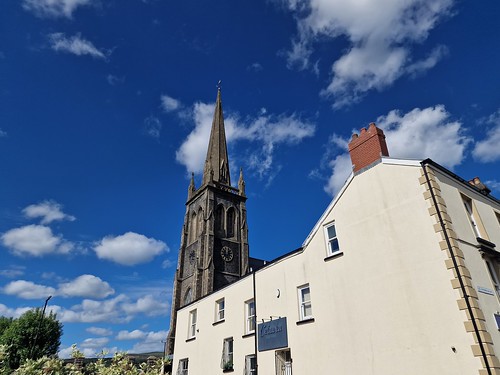 St. Elvan’s Church, which was constructed in 1852. 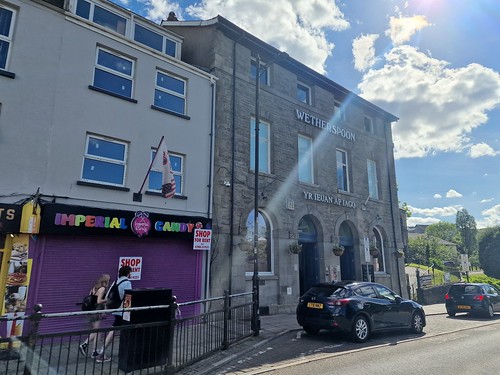 Ticking off another JD Wetherspoon, who have a relatively large number of outlets in these former mining towns, this is Yr Ieuan Ap Iago. The pub’s history on their web-site mentions the stone I wrote about earlier:

“Virtually outside the JDW premises is a memorial stone commemorating James James or Iago ap Ieuan, who composed the national anthem of Wales. The five-feet-high memorial stone was mined at a quarry just north of Aberdare. The commemorative plaque set into the stone is of north Wales slate. James moved to the Cynon Valley (which includes Aberdare) in 1873 and spent his last years in Abedare itself. He was buried in Aberdare Cemetery in 1902.”

The building was used as a Post Office before JD Wetherspoon took it over. 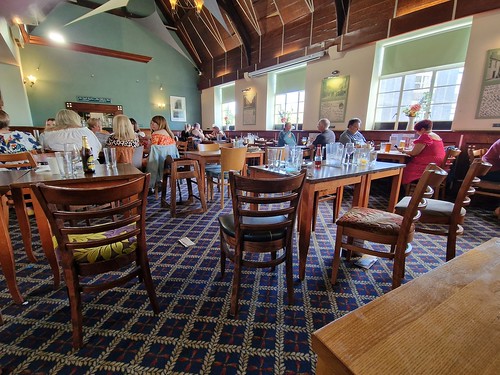 It’s easy to sneer at Wetherspoons, but having visited over 400 of their outlets, I’ve seen a lot of very good practice alongside some hard working staff. And my usual caveat of that it’s important to visit great independent pubs, as often seen in the Good Beer Guide, although I’ll add that this pub is listed in it as well. Trying to be as a polite as I can, understanding these are challenging times for pubs, this venue was a bloody disgrace though by any standards and just a little bit of an affront to hospitality, by far the worst Wetherspoons that I’ve visited. Surfaces were sticky, there was litter ground into the floor, there was food debris in random places and every table had empty glasses and plates on. The pub is towards the lower end of JD Wetherspoons on Google Reviews (the lowest rated in Wales and one of the lowest that I could find in the UK) which doesn’t really surprise me. Hopefully the pub didn’t get caught out on one of the company’s CQSMA inspections, although I imagine it’s had its moments in the past. 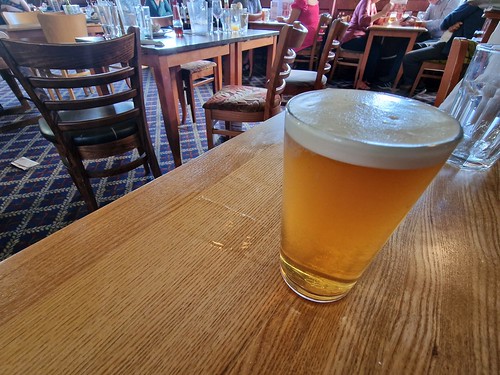 The app suggested the wait time on food was eight minutes, but it was clearly longer than that, with our drinks having not arrived after 35 minutes. I went to recover them at the bar as they were clearly not going to be delivered any time soon, with Liam’s soft drink having a glass with ice that had nearly entirely melted and my pint was substantially short measured. The staff were helpful and friendly, topping up the pint, but they were so short staffed that the manager probably should have suspended service for a short while as they couldn’t cope, especially as they had customers coming and leaving straight away anyway. The staff were also trying to deal with a number of complaints from customers, so I wasn’t entirely sure they were making much progress with the backlog given the issues they were trying to deal with.

I wondered at first why the staff weren’t collecting glasses when they walked back to the bar, but the hatch to the kitchen was already at capacity so it’s not clear where they would have put them. On the bright side, my Moose River from Hop Union Brewery was well-kept and suitably refreshing. As an aside, it could be asked why we stayed in a venue that was clearly bloody dreadful. I have to admit that the pub did have the advantage of having power points so that I could charge my phone up (unlike McDonald’s where I had hoped they might have charging facilities), so I have to give them credit for that and that’s why we stayed.

Going back to the pub reviews, one customer noted:

“The staff here really do work hard. Most of these reviews are probably from some very entitled people”

They might do, and indeed they did seem to be doing their best when we were there, but I note this review from two weeks ago:

Which is more in line with our experience.

That sounds like me using their electricity….. Not a bad idea to be fair.

“Food was acceptable but it was dirty, tables full of dirty dishes, no interest in cleaning away and wiping down these tables. The whole place needs a good clean up, everything looks grubby and shabby. I realise the drinks are cheap but not everyone goes there to just drink. When I go out for a meal I want things to be at least clean, at best light and cheerful. I haven’t been there for about 2 years because of the state of the place, I won’t be going again.”

This is from a year ago and there are tens of these reviews, not really ideal.

Anyway, enough negativity, I can’t copy and paste reviews for ages about cleanliness of a pub in Wales that I’m unlikely to ever go to again. I’ll be positive by saying the staff did seem to be doing their best. 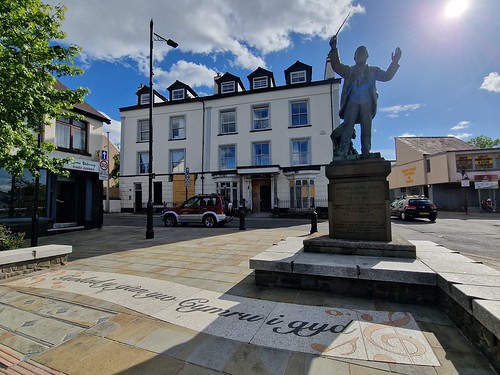 Music is clearly important to the community, this is a statue of the composer Griffith Rhys Jones. 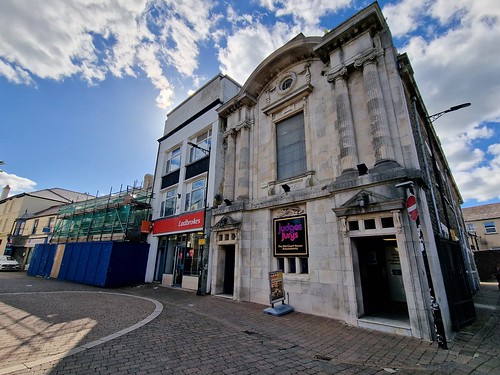 What was once clearly a rather lovely building, the old court rooms. 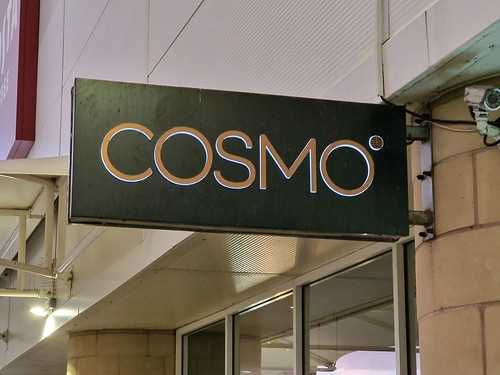 I had hoped for a delicious salad bar for our evening meal, but Liam was adamant he wanted to go to Cosmo in Wolverhampton, so I agreed. It was a bit of a drive, but I’m sure I entertained Liam for several hours with my entertaining conversation. Oh, and a song about Kettering that I’ve modified slightly. 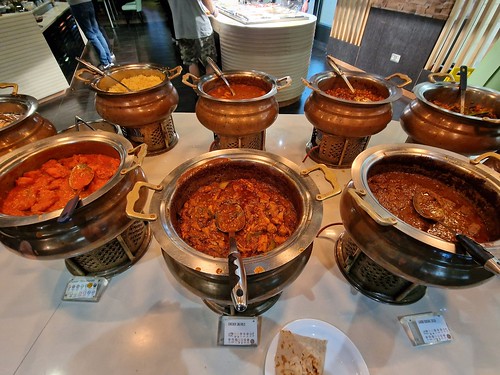 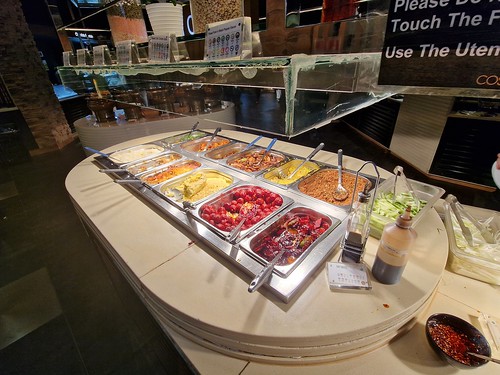 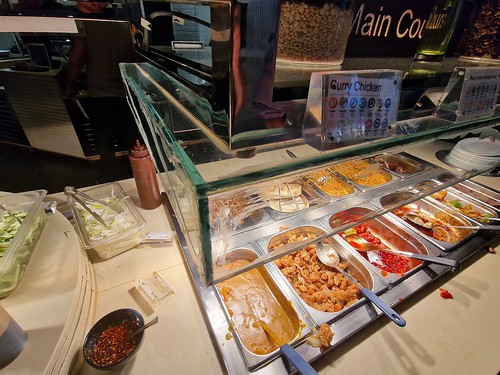 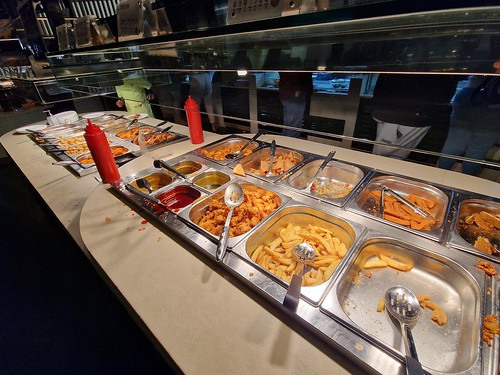 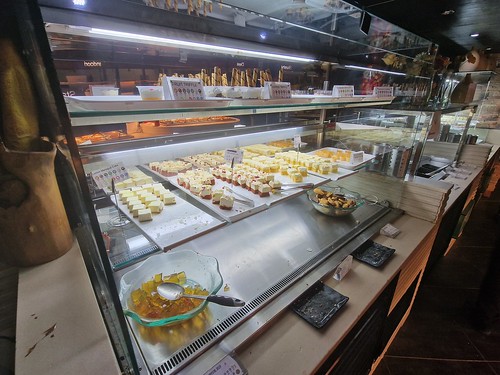 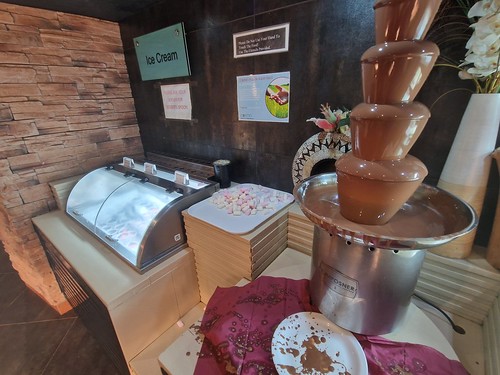 The delights of the food selection at Cosmo. Without going on for too long, this was the best in the chain that I’ve been to, with everything clean, efficient and well managed. I had booked a table the night before (as in that’s when I had made the booking, not when I had booked the meal for), which was essential, and they had our booking and got us in ten minutes early. The food was kept well stocked, the quality was high and the range of curries was particularly decent. It’s inevitably pile it high in its design, but I liked that they had a wide range of food and it met my expectations in terms of the taste, temperature and presentation. Indeed, looking at the photos, it’s making my hungry again.

There are the usual refillable soft drinks as well and I went through far too many fizzy Vimtos, but they’re not often available and I’m easily pleased at the best of times. The portion sizes that the restaurant let me get were a little excessive, but it’s fair to say that I left not feeling hungry, and Liam seemed equally satisfied with the volume of food as well. Despite it being busy, the restaurant had plenty of food counters and I was rather pleased that Liam had picked such an excellent choice of place to go to. I need more friends who will take me on road trips and to all you can eat restaurants  🙂 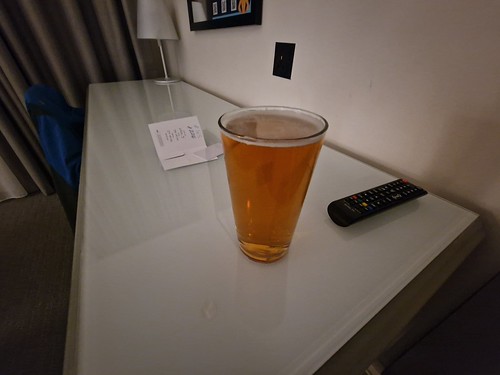 And, after about another hour of driving, into the Mercure in Daventry, who had pre-annoyed me by ignoring my emails asking what time I could check-in at (which is really me checking they won’t oversell the room) and whether the bar was still open. 90% of Accor hotels seem to respond within an hour, some within minutes, so I wasn’t overly impressed as unlike Liam I do get worried about rooms being oversold. We got our free welcome drinks (which they forgot about unlike I helpfully reminded them) that I’m not sure we needed after such a long and brave day of zip-lining, but the Camden Pale Ale tasted as it should. There was a wedding going on at the hotel, but it didn’t give us any noise issues and the hotel pricing was very reasonable, so no complaints there.

Anyway, that was the end of a long day, and I don’t need to mention the bravery we showed (particularly me) as I may have happened upon that subject a few times already. And sorry to Stuart that there wasn’t likely as much coverage of Wales as he would have ideally liked.