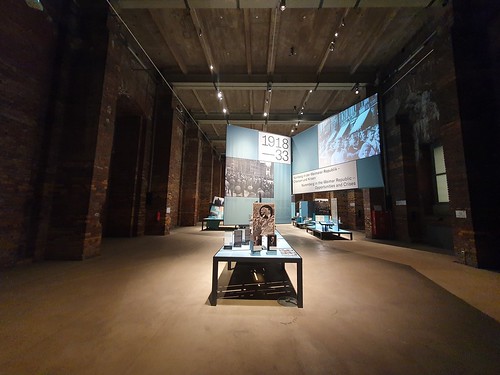 This morning’s visit was to the complex where the Nazis held their grand rallies in the 1930s, which became hugely important as the decade progressed. The first building I visited was the large and quite formidable building that is the unfinished Congress Hall. There’s usually a permanent exhibition here and they’re building a larger and more substantial museum, so there’s just a temporary exhibition at the moment. To be honest, it wasn’t particularly well laid out and was lacking in much information, it’s a skippable part of the site and the only chargeable bit. I’m sure that the new exhibition centre will be a much more useful place to visit in terms of giving information about the entire site.

There’s a full set of photos at https://flickr.com/photos/julianwhite-uk/albums/72177720298255858 which are of the inside and outside of the exhibition centre. The visible new bit sticking out of the Congress Hall is the new section they’re constructing as part of the new documentation centre. At the moment, the Congress Hall is used by the Exhibition Centre and the Nuremberg Symphony Orchestra. 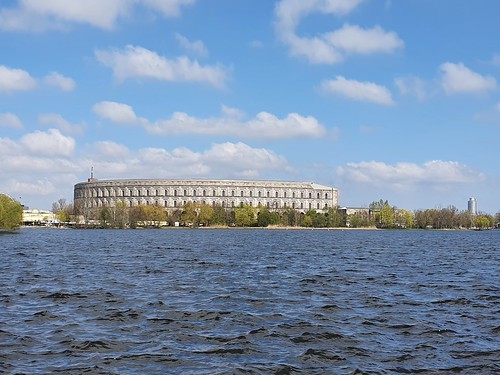 It’s hard to deny that this would have been an imposing, and arguably inspirational, building for those attending rallies, but it wasn’t finished and the planned roof was never put on. This building was inspired by the Colosseum and was designed by Ludwig and Franz Ruff, not Albert Speer who was the grand architect of the Nazis. However, he was busy planning a grand arena nearby called the Deutsches Stadion which would have housed a ridiculous 405,000 spectators, on which work has started in 1937 and was expected to be completed in 1943 but then war got in the way. There’s a useful map of the site here. 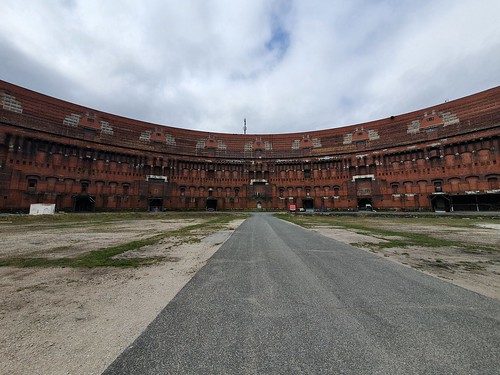 I was a little confused about the entire arrangement here. I had thought that the building interior would be closed off and only accessible via the information centre, but they’re separate and anyone can walk into this huge area. It’s not hard to see that the German authorities have struggled to know what to do with this, they thought about demolishing it, but it’s been left to stand and is just effectively a large car park, although with not many cars. With the exception of Prora, a Baltic coast village designed to be a seaside resort, this is the largest Nazi-era structure which is still standing.

I’m not sure what the plans are for the future of the actual main building and the grand open space, they’re not mentioned in the comprehensive documentation released by the museum as part of their plans for the new documentation centre. And the museum itself has found the entire project troublesome, not least with the disaster of a man being killed during construction in a major industrial accident. I didn’t find the documentation centre’s temporary exhibition was particularly clear about several things, although there was some more useful signage around the site which showed where the rallies were held.

This is the Great Road, which is 1.2 miles long and 40 metres across, a ridiculously long route which was meant to be used as part of the rallies, a centrepiece of the area. It wasn’t quite completed as it was shorter than intended, but it was handy for the Americans to use as a temporary military airfield following the end of the Second World War. 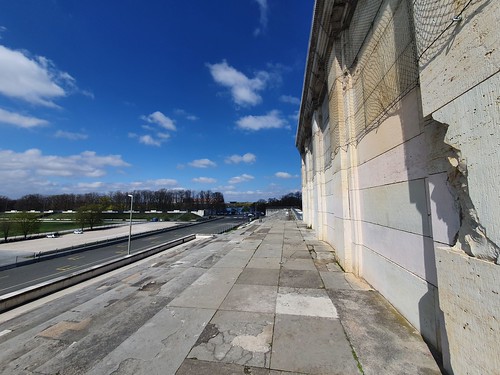 Next was Zeppelin Field and there’s a full set of photos at https://flickr.com/photos/julianwhite-uk/albums/72177720298154930. This is a large site which was redeveloped by Albert Speer, it could hold 320,000 people at once, with 70,000 being seated in the stands. The authorities have been troubled by this whole area as well, demolishing a chunk of it and I think hoping that the whole site wouldn’t be visited by future generations and so would just die away. That hasn’t happened, people are fascinated by the site and how the whole tragedy of the Nazi party came to be. So, recognising that, they’re investing heavily into improving the museum facilities here as well. There’s a large hall inside the stand called Golden Hall, currently only accessible on special tours, but they’re hoping to open this up permanently.

I can understand why German Governments wanted to make this site go away, they likely wished that it had been damaged during the air raids that had instead destroyed so much of the historic old town. Taking down the two rows of pillars in 1967 made great sense at the time, the authorities wanted to avoid the site being used for nefarious purposes as it wasn’t inevitable that the Nazi period was in the past. Fortunately, time has shown that it very much appears to be in the German past, and as time has gone on, new uses have had to be found for the site. Today, it’s used for various types of sport, including motor sport. 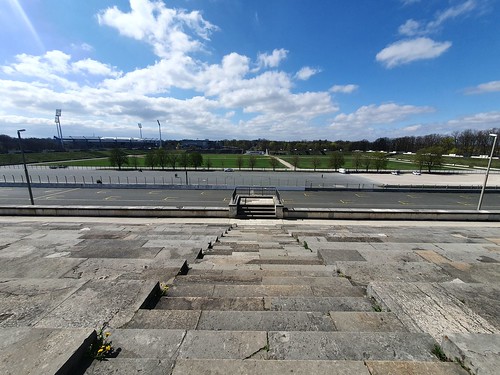 As far as I can make out, that raised section in the centre of the photograph is where Hitler would have stood.

It took me a few hours to explore all of the site, so I thought I deserved a little sit down and a beer at Gutmann am Dutzendteich. Not normally one to sit outside, I thought I’d take the opportunity here as there didn’t look like there were any smokers and there were no insects visibly attacking people. Service was attentive and polite, with everything feeling calmer than in the city centre.

I ordered the Brewer’s Salad and this took me over half an hour to get through, the portion size was ridiculously large. They had a beer sauce poured over the salad that was suitably rich and decadent, probably better than the beer actually.

A very neat and tidy cemetery on my walk back.

I think this little arrangement was off-cuts from a mason’s shop, or at least I hope it was.

I stopped at the Balkon bar on the way back, notable as it’s just an outside bar which is actually quite small, so it’s usually difficult to get a seat. Despite it being warm, the bar had a chill wind blowing across it.

It was good for people watching though, that’s the subway to the city’s main railway station.

I saw very little evidence of Ukraine flags in the city, it was very different to what I had seen in Poland and the Czech Republic, although they do have different histories of course. This was an exception, an area where there were photographs about how there is support for the country.

Rather awkwardly, the hotel gave me a keycard for a room that wasn’t ready. I went back downstairs and just waited with my welcome drink and decided to just linger for a little while, then reception realised their mistake and apologised twice. I wasn’t too concerned, although they then said my room was definitely now ready, so I went up and it wasn’t. But, there wasn’t a long wait and the staff were helpful.

Not the largest of rooms, but clean and like the other Ibis, lacking in hot drink making facilities. Some of mainland Europe is like that…. Not Poland though obviously, you get tea and coffee galore there in Ibis hotels. Anyway, I mustn’t compare.

The view from my room, which I liked. The city wall is visible towards the rear of the photograph and then right at the back is the city’s main railway station.

I had a little meander around the city for a while.

A wider shot of the memorial, with my hotel room visible in the background.

As for general thoughts of Nuremberg, the outskirts were much more peaceful and calm than the city centre. It was considerably cleaner in the city as the refuse trucks were out in force cleaning up the Bank Holiday excess, so that was positive. There was still a little bit of tension in the air though, the amount of smashed glass and shouting I could hear from the hotel room persisted for some hours. I usually like listening to street noise, but the sound of violence, breaking things and random drunken telling is less street noise and more riot, but fortunately the window closed and sound-proofed the room.

Wednesday (part 2) : Bombed Out Church in Nuremberg and Final Night in Ibis

Tuesday : A Meander Around Nuremberg