My morning’s expedition was to walk around the walls of Nuremberg which are mostly still in place in some form or another. The walk is around five kilometres and there are numerous attractive river crossings along the way as well as no shortage of historic towers. For anyone who can bear it, there are 133 photos at my album at https://flickr.com/photos/julianwhite-uk/albums/72177720298196593 which cover just about every single part of the walk. I got a bit over-excited with my camera clearly, but it was a pleasant walk and the weather was moderate.

There have been walls protecting the city since the eleventh century, but the current set-up was mostly complete by the end of the fourteenth century and then were faffed about with for a couple of centuries. Unfortunately, some sections have been lost due to nineteenth century ‘improvement’ and numerous areas were damaged during the Second World War, but repairs were made to most of those. There’s a moated area, which is mostly where I walked, but this was never filled with water. The wall was successful in its intentions, only once during its history were its defences breached and that was by the American military in April 1945. The signage for the wall is poor and the number of history boards along the route were minimal, it’s a shame that the local authorities aren’t prouder of this substantial piece of history which is in their care. 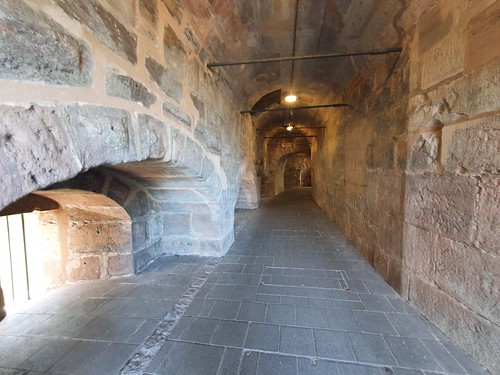 Some sections of the route go through tunnelled areas such as this, these are the bits that felt the most historic. It’s a bit far fetched to say that it’s almost possible to sense the medieval period from some stonework like this, but I can imagine the walls have a sense of security to the residents. The base of the walls were also used to store provisions in to help ride out any sieges which might take place. There are some efforts to restore buildings along the fortifications and they appear to be doing a decent job of this. 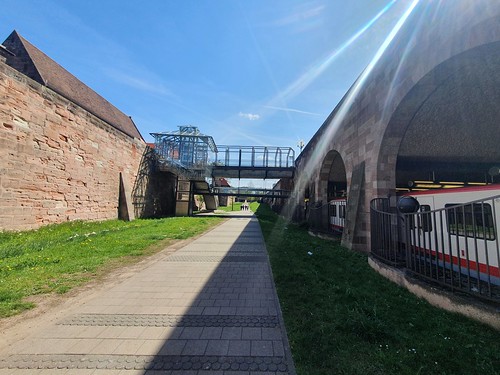 They’ve put a metro line on one side of the moat here and this section was the only part of the route that there seem to be anti-social behaviour problems. The rest of the walk was calm and relaxed, surprisingly unused in most places. Significant sections of the route are accessible by those in wheelchairs, they’ve made an effort to ensure there are plenty of slopes rather than steps. 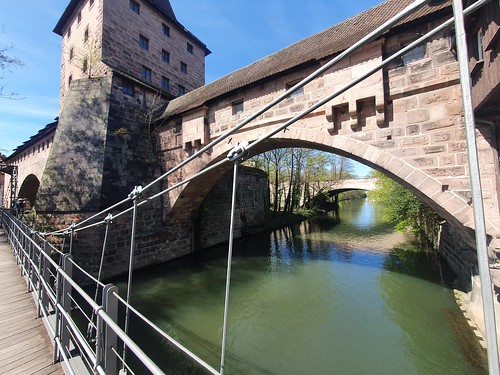 I think this was my favourite section of the route, a pedestrian bridge which has been strung up over the river. 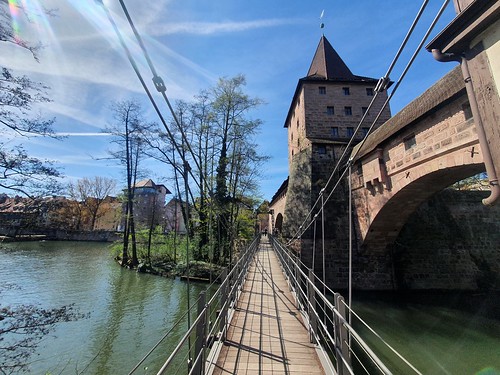 Another view of the same crossing, that’s Schlayerturm (Schlayer’s Tower). This was one of the sections damaged during the Allied bombings later on during the Second World War, and during the repairs it was discovered that it had been shortened during the early sixteenth century as there was too much weight and they didn’t really want it falling down. I suspect this was problematic during Covid though, it’s hard to keep two metres apart.

After getting back to where I had started (the joys of a circular walk), I went to Brown’s Coffee Lounge for lunch and the service was sluggish and inattentive, not that it much mattered given I was in no rush. The beer was adequate and the staff were polite though. Most people were sitting outside, but there were so many smokers that I wasn’t going to find that very relaxing. And I don’t like outside anyway, it’s too hot and there are too many insects that bite.

The bagel was much better, reasonably priced and filled with Coronation chicken, although I’m puzzled why the napkin was placed in the middle as it was then unuseable as it was covered in sauce. The atmosphere in the cafe was though clean and comfortable at least.

Nearby is Ehekarussell, a large fountain which tells the story of life after marriage in about as depressing a manner as is possible, it’s quite a controversial monument although seems quite accurate from the descriptions that I’ve read. It’s been here since 1984 and was designed by Jürgen Weber, although there was no water in it last week, probably just another thing broken in this city.

It’s an odd piece, but quite thought provoking and certainly unique.

I noticed some police hiding in odd places around the city and wondered what was happening, but I think they were just guarding a protest discreetly and trying to not be in the way.

This is Dani Karavan’s “Way of Human Rights” which was unveiled in 1993, but which feels much more modern. A lot of care and thought went into this monument and I like the way that it isn’t immediately obvious what it is, but there is some subtle signage around which explains the concept. Art which tells a story like this, especially given the history involved, is a real benefit to the community and the public realm.

The gateway at the northern end, with the columns performing two functions, one is a reminder of the evil committed by the Nazis and another is a focus that human rights violations still take place around the world. Unfortunately, the situation in Ukraine is a very vivid reminder of the challenges that still exist in the world.