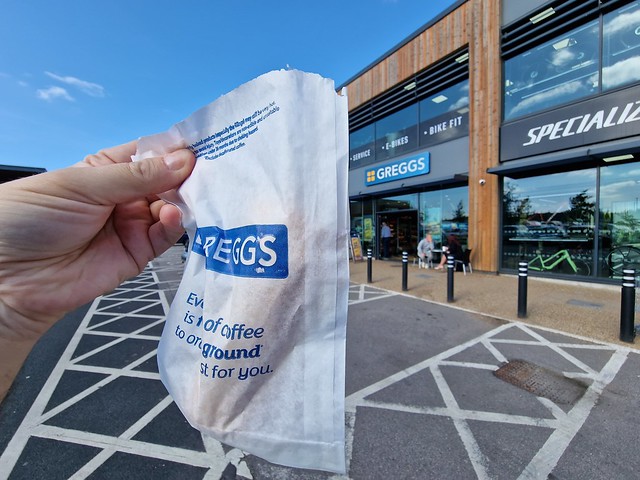 This weekend to Wales with Liam proved to be what I would call action-packed, hence the breaking down of the days into smaller parts, to make this blog writing thing a little more manageable. The day started with a quick trip to Greggs on Hall Road in Norwich to get my free sausage roll from O2 Priority Rewards. I decided to wait for five minutes for my sausage roll to be cooked, although I then had to wait for about fifteen minutes for it to be cool enough to eat. With that, we were ready for the big drive. Well, Liam was, I just sit there thinking of things to be annoyed about, although fortunately he’s a very good driver and so I don’t have to worry about that. 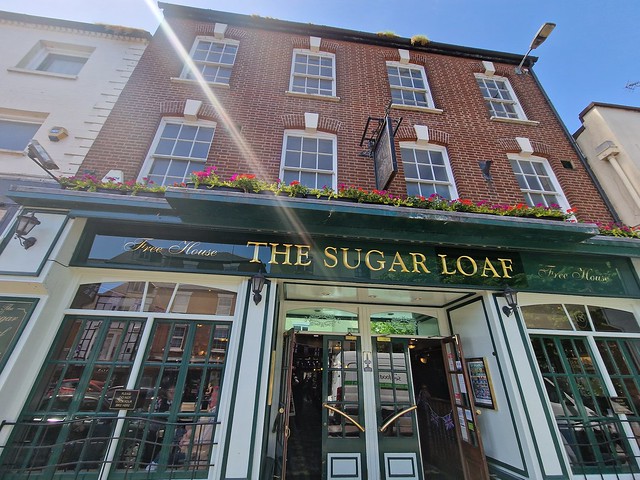 There’s something quite exciting, to me at least, about stopping at provincial market towns that I haven’t been to before, getting a little snapshot of the place and its history. We opted for Market Harborough and this is the JD Wetherspoon operated Sugar Loaf. There were no Good Beer Guide listed pubs open and although there was an interesting micropub arrangement, it didn’t open for lunch so I couldn’t take us there. 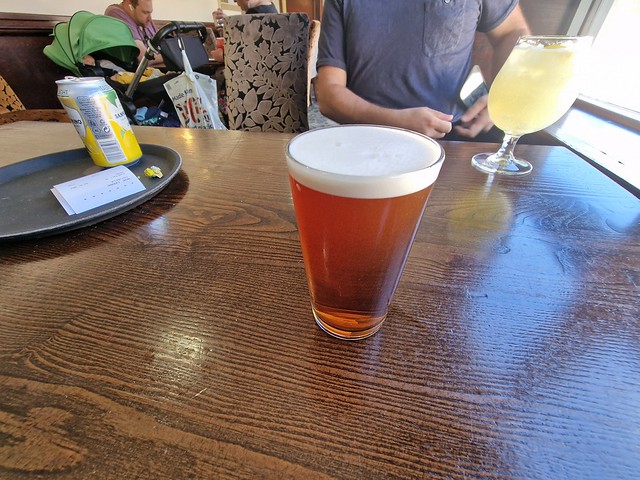 Liam had one of his quick snacks, whereas I couldn’t be tempted by the ever increasing Wetherspoons prices. The kitchen staff were playing music at a volume which was probably audible to the car drivers outside, at a rough guess I assume the managers don’t dare say anything. I went for half a pint of the Ten Fifty from the Grainstore Brewery which was brought over with a hair in it, but they swiftly replaced it. The beer was well-kept, and was smooth and rich in taste (the one without the hair).

The pub itself is towards the bottom end of the on-line reviews scores for the chain and I can see why, it wasn’t the cleanest by a long shot and it felt a little unloved. The reviews aren’t particularly riveting, nice bit of judgement here in the middle of all of it though….

“The giro gang and travelers. Cheap start to a session. I’d never have more than one. Travelers are ALWAYS Served first regardless of ….. The Sugarloaf is a haven for travelers and the unemployed”

I was humoured by the “I’d never have more than one”….. As if that pops him just a little bit higher than the other customer being sneered about.

Anyway, the staff seemed friendly and just as a background about the pub’s name:

“This Wetherspoon pub was once Goward’s grocery shop. Founded in 1810, Coward’s traded on site until 1910, weighing out provisions and cutting sugar by hand from a comical-shaped sugar loaf. In a warehouse behind the shop, Goward’s staff blended ten, ground coffee, chopped sugar, ground spices and washed and polished dried fruit for sale in the shop.” 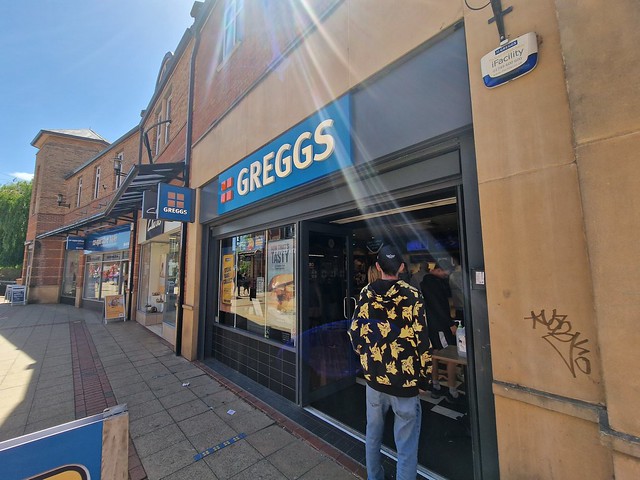 As I hadn’t eaten, I thought I’d better pop to the town’s Greggs as I hadn’t been to one of their outlets for over two hours. There was a long queue to be served, and when I got to the front I agreed to wait seven minutes for a chicken bake. 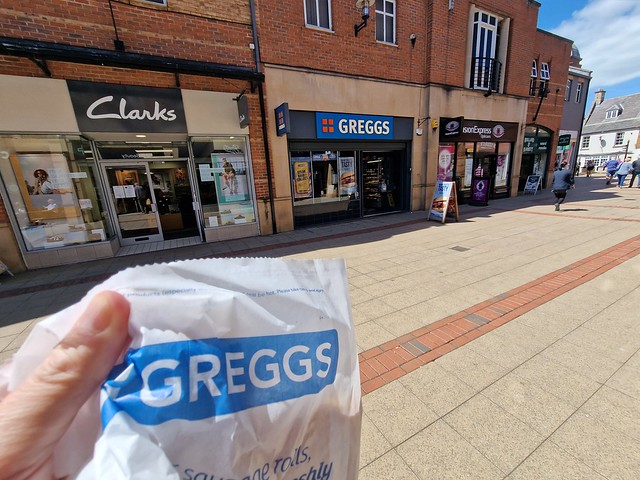 I had the same problem as earlier on during the day, I had to wait nearly ten minutes for the decadent pastry to cool down. Liam was at this time in Costa collecting his free coffee using Vodafone Rewards (we were very thrifty) which seemed to take about 15 minutes, goodness knows what they were doing. 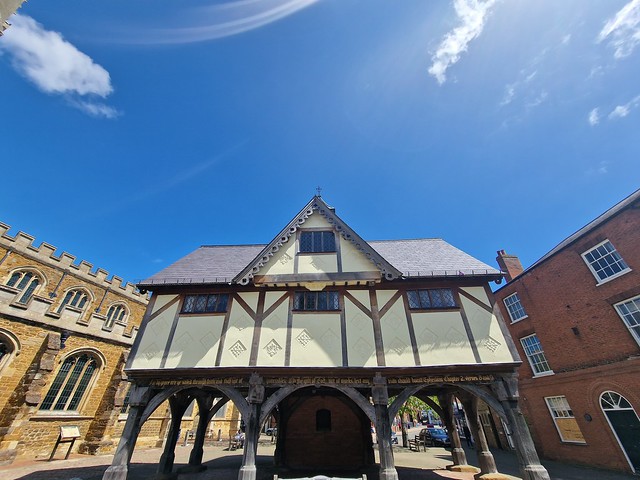 The Old Grammar School building in the heart of the town, perhaps the most iconic building in Market Harborough which was funded by local man Robert Smyth. It’s Grade I listed and was constructed in 1614, with the school upstairs and a market function downstairs. It remained as a school until the late nineteenth century and there was a large renovation to the building in 2014 because there were fears that it would fall down. 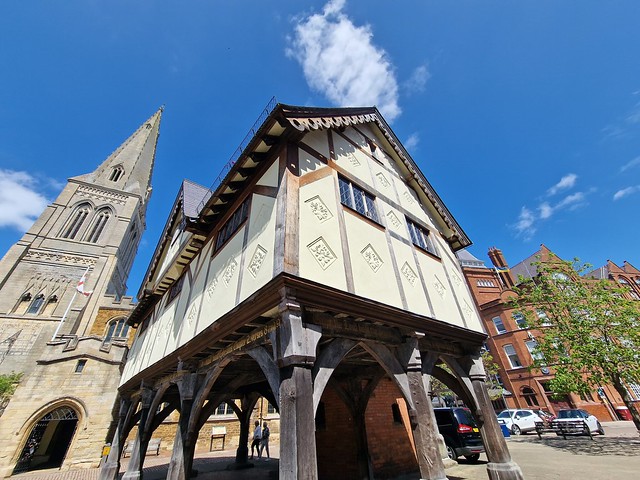 The interior isn’t accessible to the public, which seems a bit of a shame for such an interesting building. 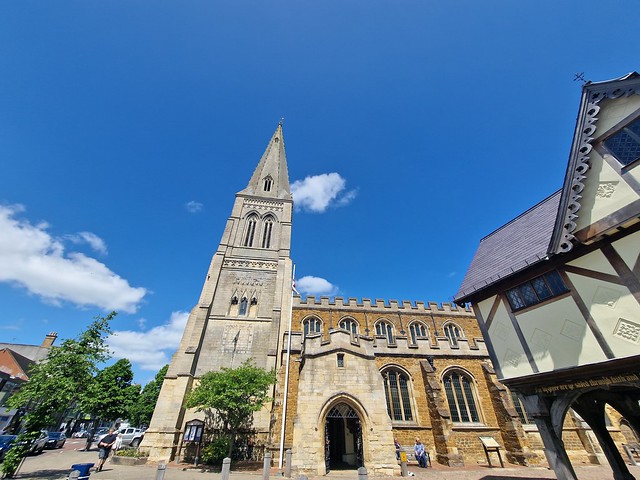 I like visited churches, as friends know to their pain I think, this is the Grade I listed St Dionysius’ Church. Apparently the locals know it as St. Di’s which sounds a bit informal. 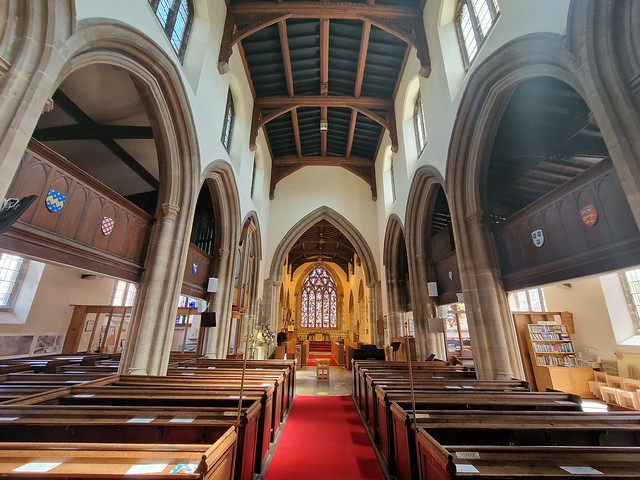 I asked a volunteer at the front of the building if we could have a quick look inside and he replied helpfully that we could, but that there was a funeral taking place in about twenty minutes. I did rush the visit a little so that we didn’t get caught up in that, it would look bad if people thought we were mourners who dashed off after a couple of minutes as if we were dissatisfied with the service. 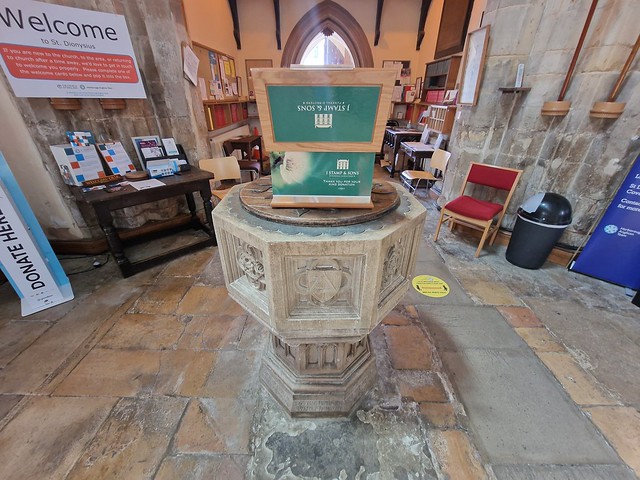 The church dates to the thirteenth century, with additional elements added in the fourteenth and fifteenth centuries. The listed building record is a little short for this church, so I don’t know the age of the font. I didn’t linger for too long in case they thought I was fiddling with the donation box for the funeral. 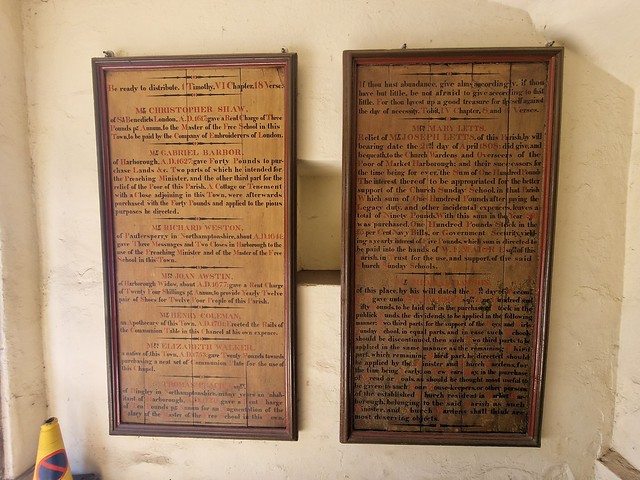 A board showing a lift of the bequests made to the church. 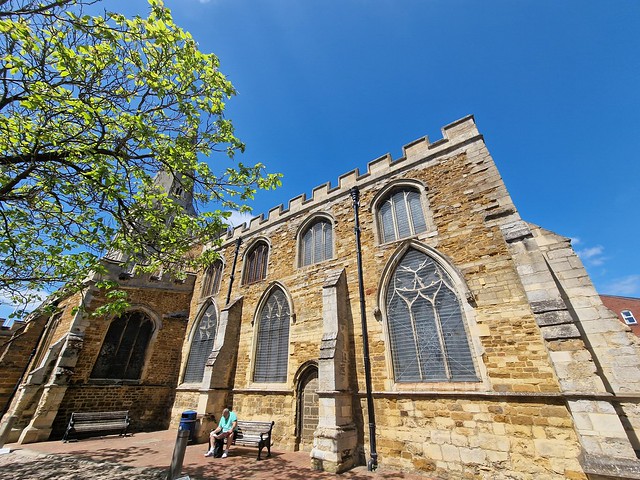 It’s a pretty church, although there’s not much of a churchyard remaining, it’s all been paved over which is a shame. The priest’s door has also long since been bricked up. 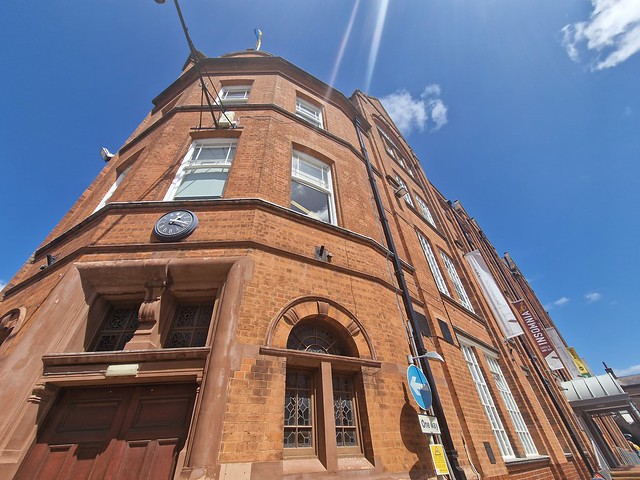 Liam was no doubt thrilled when I announced that we had time to pop to the town’s museum. 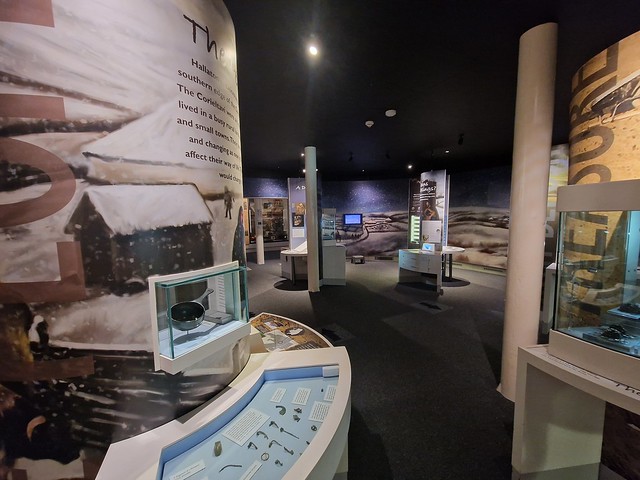 There was no admission charge to go into the museum and it was neatly laid out and all seemed ordered. There were several other visitors and the arrangement is that it’s all part of the library and council buildings, so they can share staff between the different elements. 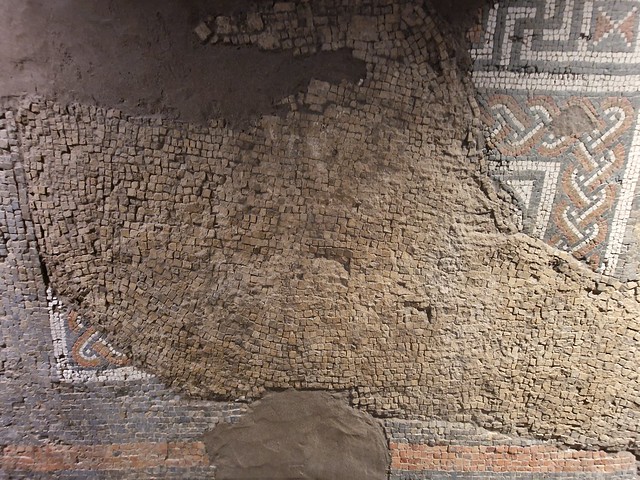 The Drayton Villa Mosaic which dates to around the second century AD. I’m a little puzzled by the repairs made to the centre of the mosaic, which the museum notes were made in around the late fourth century, shortly before the property was abandoned. The reason I’m unsure is that is such a poor repair job, why did they bother using mosaic pieces? They might as well just used impacted mud which would have matched about as much. Anyway, my commentary on fourth century builders aside, it looks like it was originally quite a decadent mosaic. 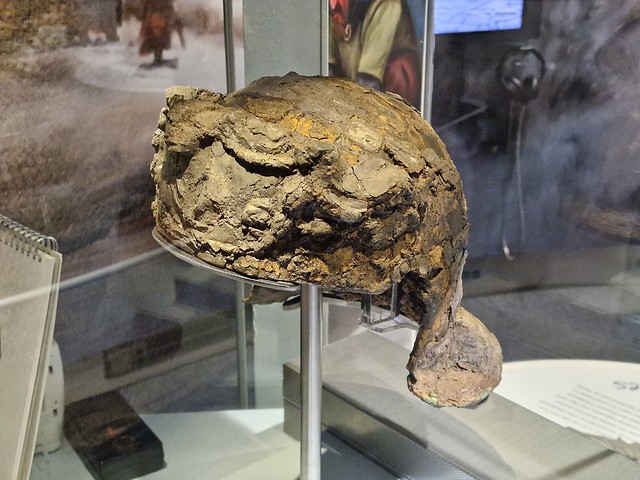 I liked this, it’s the Hallaton Helmet which is a cavalry helmet uncovered in nearby Hallaton in 2000. I thought that it might be a copy for a while as this is the sort of thing that the British Museum would like, but it is the original and, not only that, but the British Museum spent years restoring it. 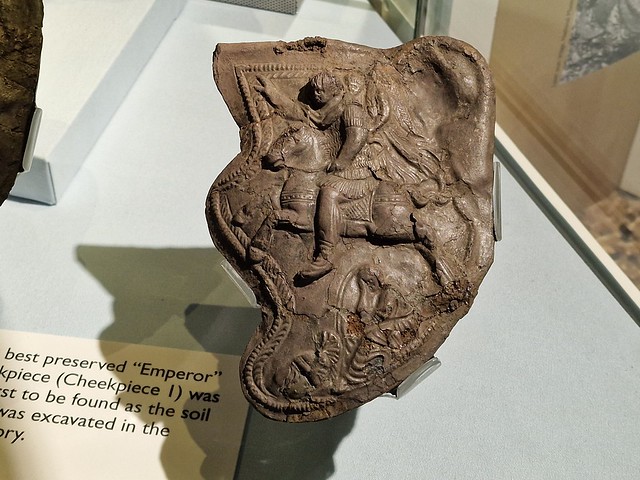 One of the cheekpieces, this was clearly a beautiful item which was decorative and functional. 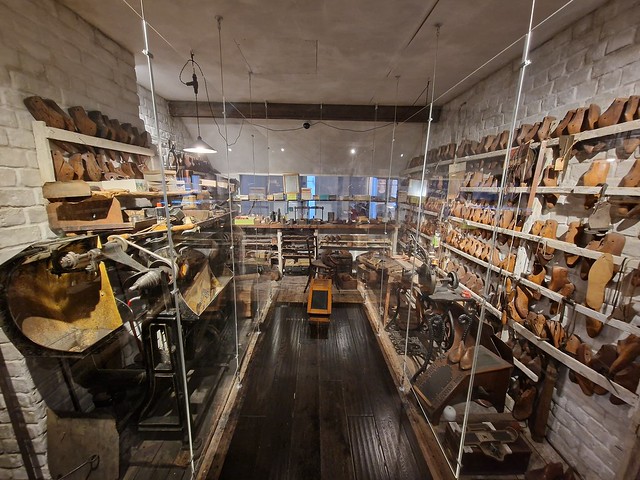 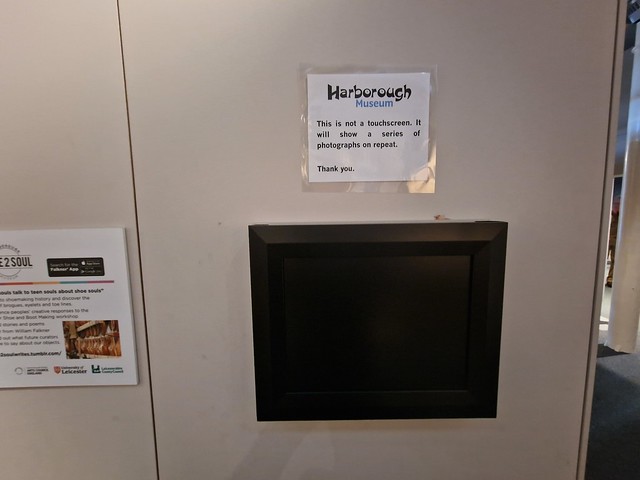 This is not a touchscreen 🙂 I can imagine the multitude of visitors who have stood there prodding at the screen. 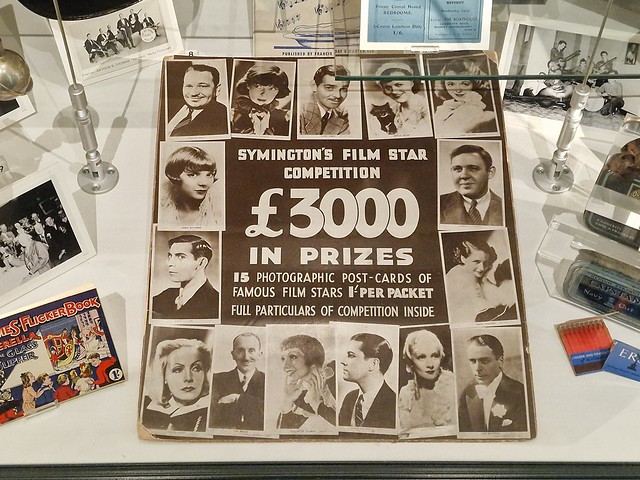 A competition which was sponsored by the Symington’s Factory, which is the building in which the museum is today located. 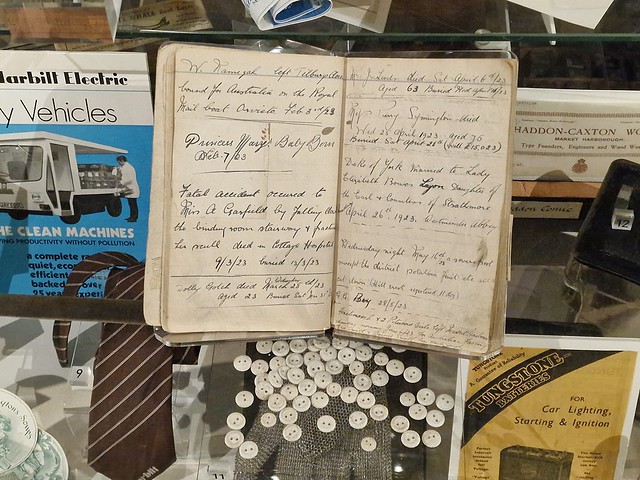 An old book from the factory, which the workers kept as a notebook between 1910 and 1975, which is some impressive consistency. This entry is from May 1923, mentioning the wedding of the Duke of York (the future George VI) to Elizabeth Bowes Lyon (the Queen Mother) as well as mentioning a frost in the area which had damaged fruit and potatoes. 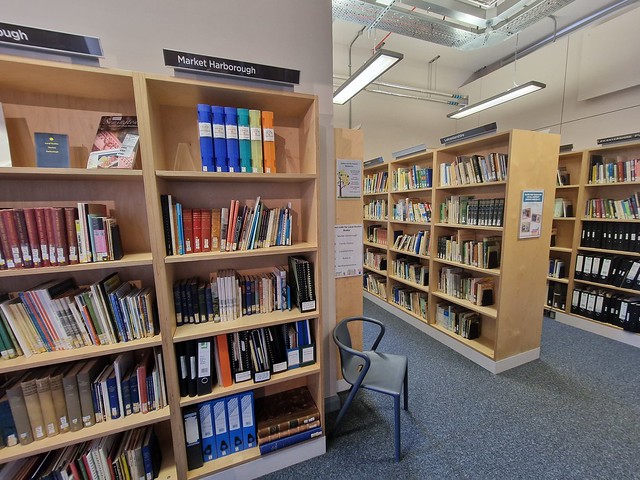 The local history book collection within the museum, which seems a rather sensible idea to me. 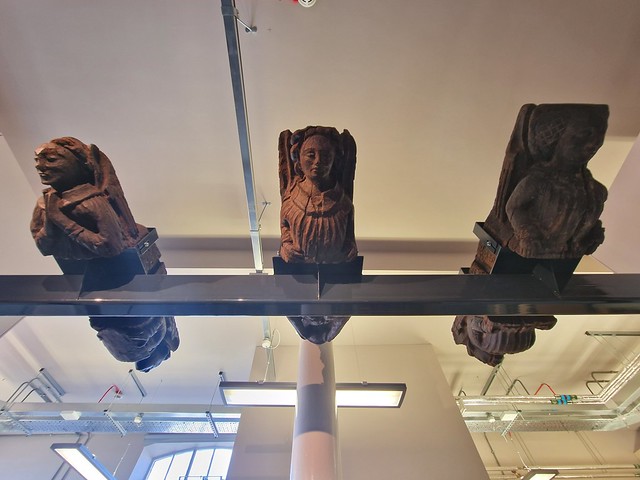 This are wooden carvings from St. Dionysius Church and they date from the fifteenth century. They were taken down in 1953 when death-watch beetle interfered with the wooden roof and it was in danger of falling down, which it was agreed wasn’t ideal. Of the seven sculptures, three are here and Leicestershire County Council has the other four. 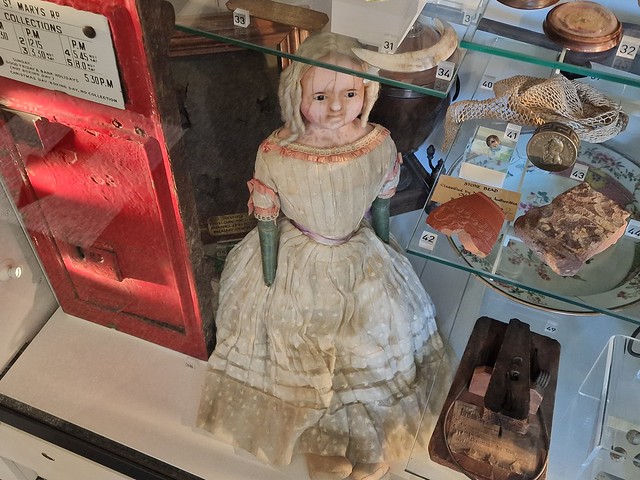 I’m not sure that I liked this doll from the 1830s, with real hair and a grumpy look. 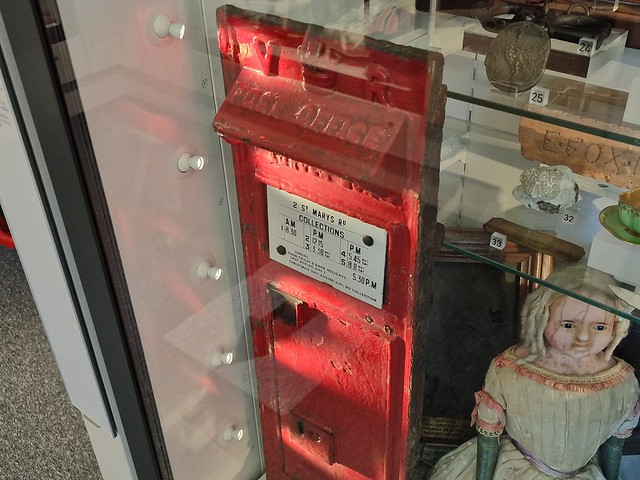 An old Victorian post box from St. Mary’s Road in the town. 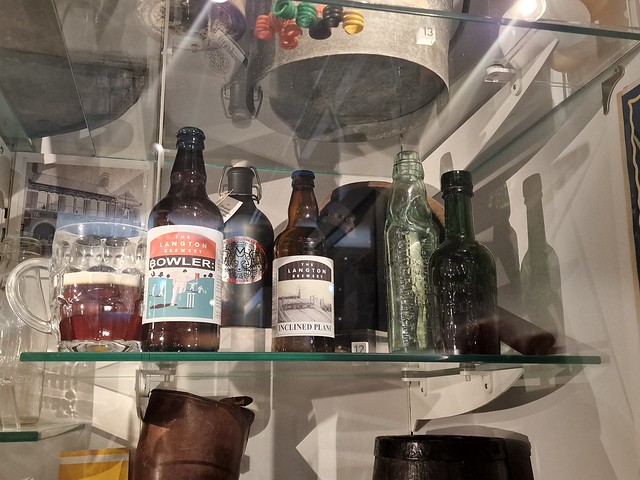 Beer bottles, the new ones from Langton Brewery and the older ones are from the early nineteenth century. 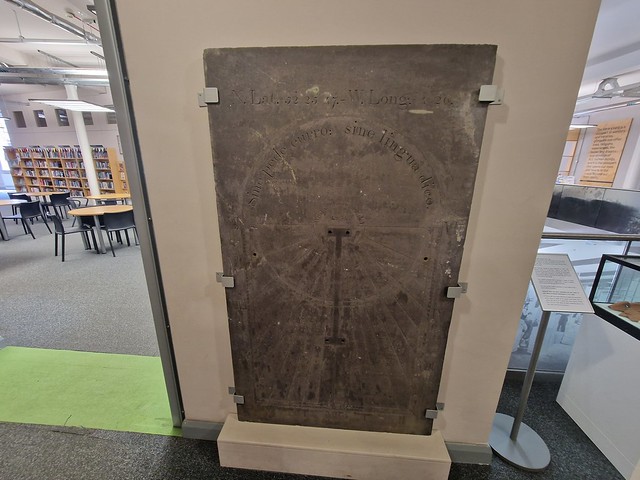 This was all a bit complex for me, but it’s the Swithland slate sundial from 1834, which was initially placed on the wall of an observatory in South Kilworth.