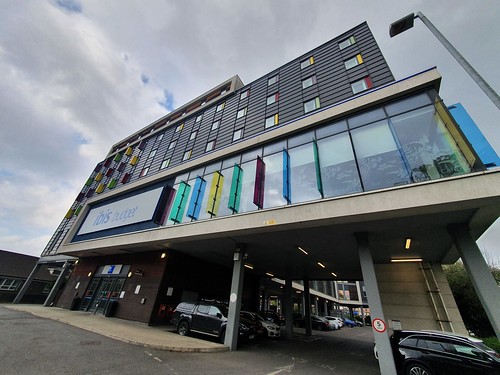 As mentioned yesterday, I had a peaceful night at the Ibis Budget which I was marginally pre-annoyed about because I didn’t expect a peaceful night from the reviews. When it’s keenly priced, I’d happily stay here again. 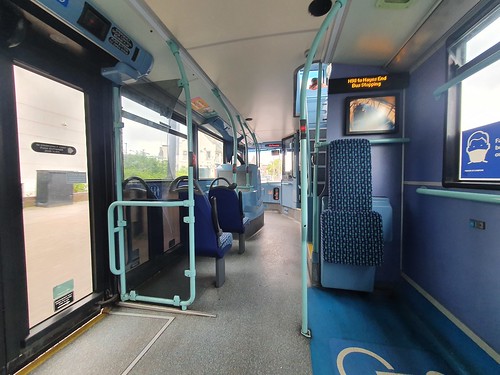 The H98 to Hayes and Harlington station, with the H buses being standard TFL vehicles but ones which service routes in the Hounslow and Harrow areas. Fortunately this bus stops outside of the Ibis Budget hotel which meant for an efficient journey. 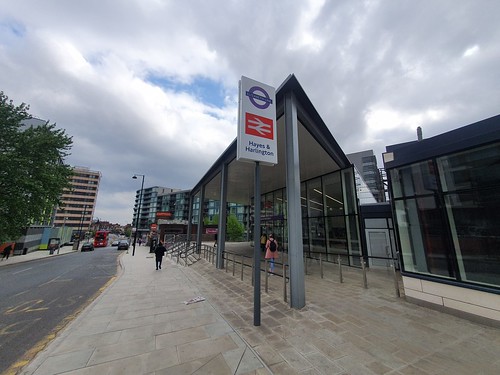 I might just imagine it, but I’m sure that the upgrading of railway stations to serve new lines, such as Hayes and Harlington with the Crossrail route does create something of a boost locally. Similar to the 2012 Olympics effect, where areas were transformed before the event, things just seem to feel a little more positive in this community.

Thanks to Google Streetview it’s possible to see what this used to look like, the building on the left was taken down to make space for the attractive new railway station with its grand new entrance. Definitely a benefit of Crossrail. 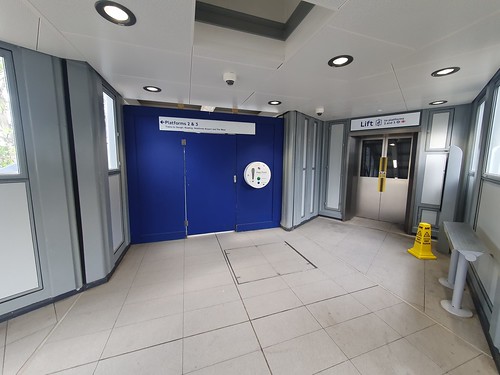 The route from the former main entrance to the platforms has been blocked off. Incidentally, I didn’t get very far into the station before needing the assistance of a staff member. The e-tickets can’t be read by the new machines, so for anyone with a pre-paid ticket, they have to go and speak to a staff member. It’s not really ideal, but the staff member was pro-active and helpful. 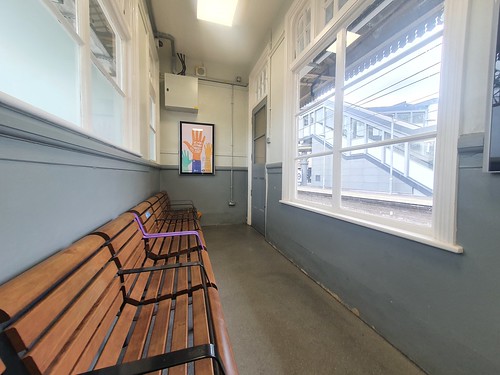 It’s not the largest waiting room, but it’s a warm and clean space which has access to power points. I seemed to take over the role as a customer service officer here though, since three customers asked me for information on their journey. 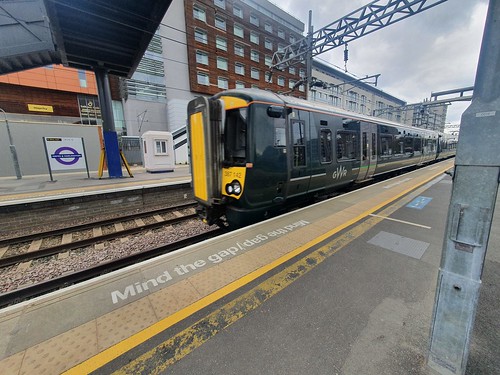 Although Hayes and Harlington is on the line to Bristol, there’s no direct service (or at least not in the morning when I was travelling) and so I needed to get the train to Reading and connect from there. 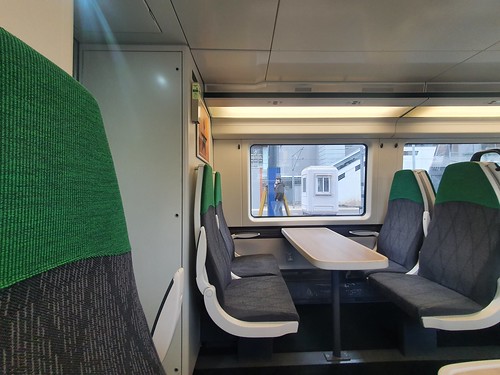 This GWR train sat outside Reading railway station for nine minutes and my connection time had been ten minutes, but I was amused with the announcement on board the train which was “I’m really sorry about this delay, there is a shortage of available platforms at Reading, which sounds like very poor planning to me”. He wasn’t wrong…. 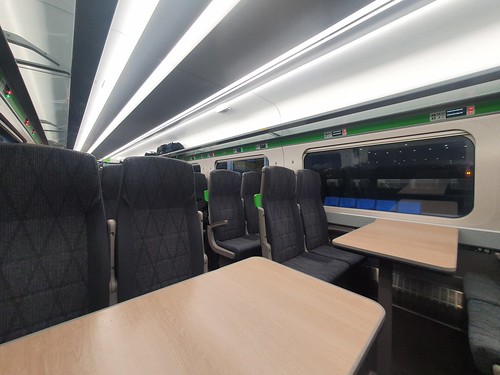 I was quite fortunate with this GWR service, as it was meant to depart from Paddington station in central London. However, a technical issue which seemed to mainly be about a lack of staff, meant that it started its journey at Reading which meant it was nearly empty. The London passengers would have had to get a different later train, leaving the rest of us luxuriating in a sea of empty seats on the service that they should have been on. Although I only had a one minute connection in Reading due to the late arrival of the inbound service, the train to Bristol was a few minutes departing. 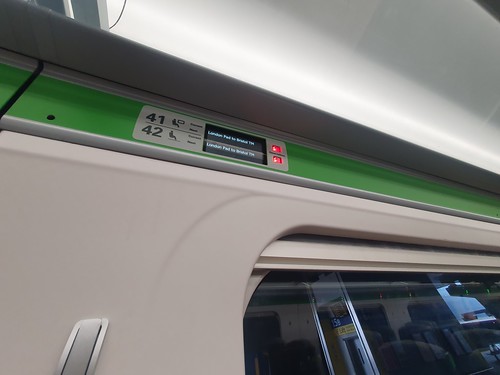 The missing out of London Paddington from the service made for a quiet journey, but very useful to have plenty of space and power points available. I did have a reserved seat for this service, but I managed to get nearly an entirely carriage to myself which is a luxury I doubt will often happen on this busy London to Bristol service. 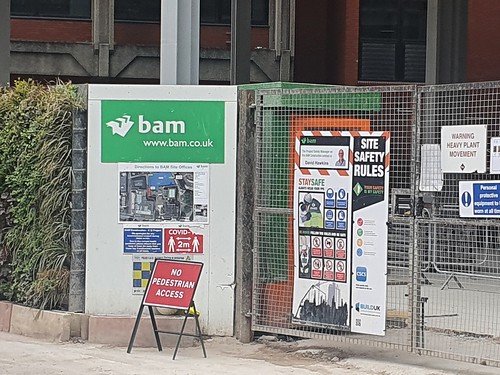 Safely into Bristol Temple Meads, I was annoyed that my friend Liam’s image wasn’t here on the health and safety board like it is at some other sites around the country. 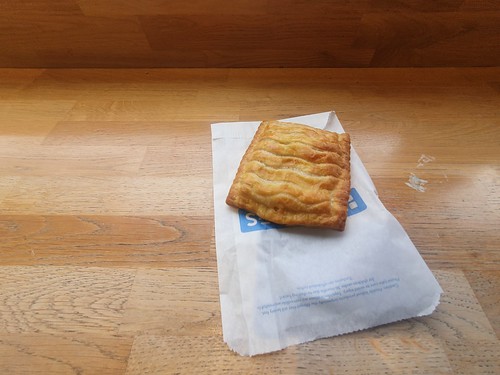 I found time for a quick lunch. I also had to go shoe shopping as I was about to go mountain climbing (my definition) for a gentle stroll (Dave’s definition) later on that weekend. As for the chicken bake, it was suitably delicious. 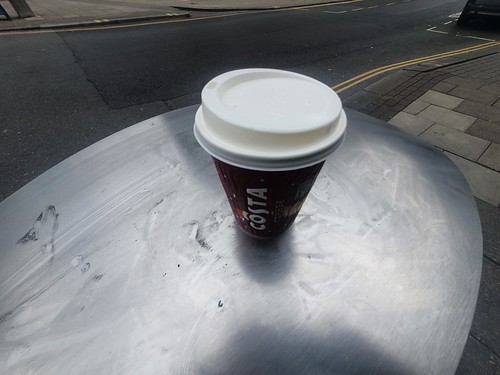 I don’t have very high standards for coffee, so picked this up from Costa as it was free on Vodafone Rewards. It was just odd and I must admit to feeling guilty for needing to throw it in the bin. I have no idea how they make coffee taste so different and bland, but I suppose it might make it more accessible to children or something. Or maybe people who don’t like coffee but like the sensation of something called coffee, I’m not sure…. But that makes me sound ungrateful for my free coffee, although to be honest, I wasn’t surprised and delighted by it. 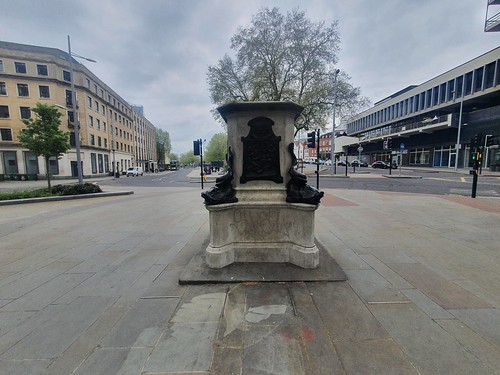 The base of the Colston statue. Last time I was here there was an anti-slavery display around the statue which shows how slaves were crammed into ships, but that’s all been taken away as well which seems to me disappointing. 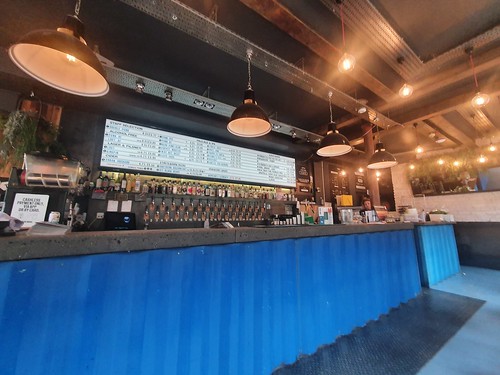 A quick stop at Brewdog Bristol to meet up with the NEC members who had arrived early. 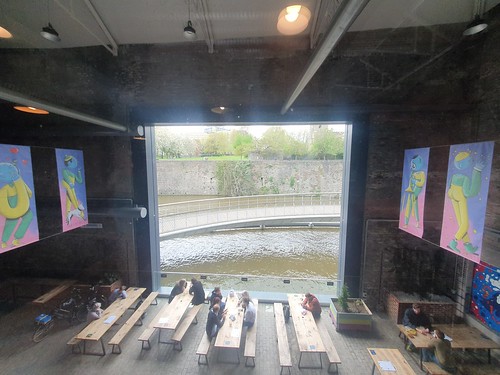 The interesting and intriguing building which is part of the Left Handed Giant Brewpub. This grand industrial building is in a part of the city which has been repurposed into a leisure district, bringing fresh life into the buildings. 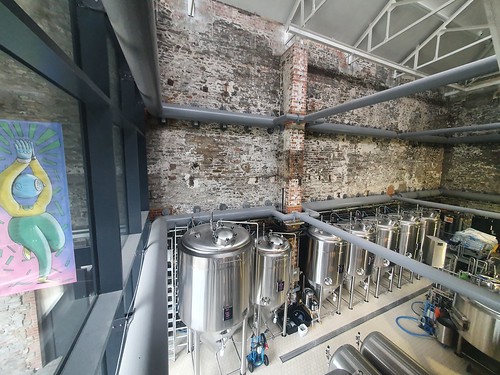 And their brewing equipment, where they produce a range of beers across numerous styles. Everything felt clean and organised, it was a comfortable environment. 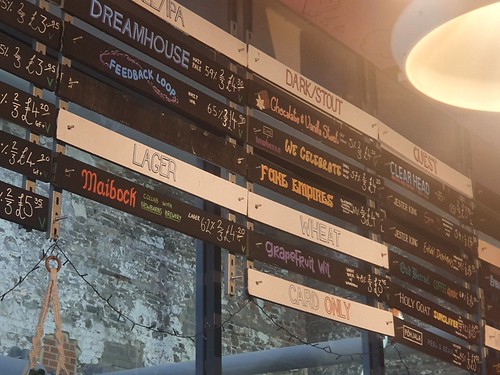 I went for a third of each of their dark beers, which caused me great stress when I discovered that one wasn’t on Untappd. Fortunately, Stuart was there to help me with the emotional trauma…. 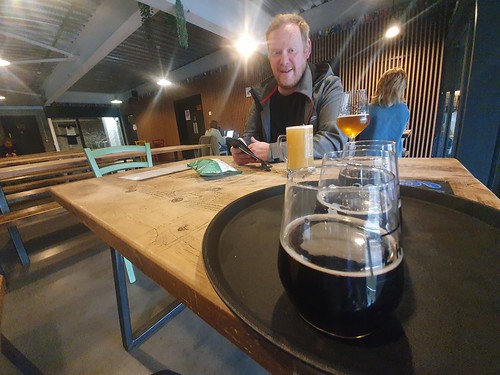 Stuart providing that emotional support. It was a decent enough venue, although the service wasn’t ideal in numerous ways. I was served entirely out of turn and another customer questioned a staff member why he was being served first when he had just arrived at the bar. I was grateful for that as it allowed me to get served, as I had decided against saying anything myself as I wasn’t in a rush and didn’t want to stress the bar staff who already looked like they were struggling. Anyway, the staff member’s beer knowledge was decent and the prices were moderate for the quality. 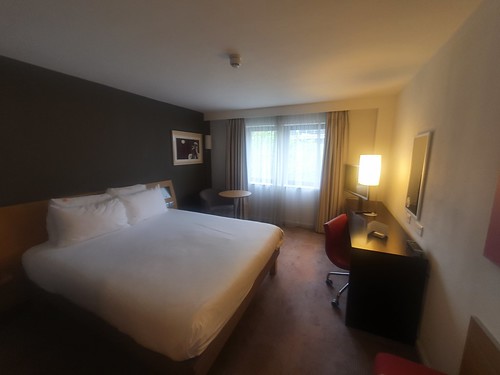 I was staying in the Novotel in Bristol, which is also where the NEC meeting was taking place on the Saturday. More about this hotel on my little Accor web-site in due course. In short, the room was perfectly pleasant especially since I was upgraded. There were some excellent touches, not least the decadent hot chocolate and I liked the welcome gift of chocolates. There’s a slight chocolate theme going on there…. The hotel was at near perfection, but the beer I had as my welcome drink was bloody dreadful, but I won’t linger on that, I’ll focus on the positives of the stay. The only other negative of this stay is that I wasn’t there for longer, I thought it was a peaceful and relaxing arrangement and it’s likely the nearest I’d stay to where an NEC meeting is held. 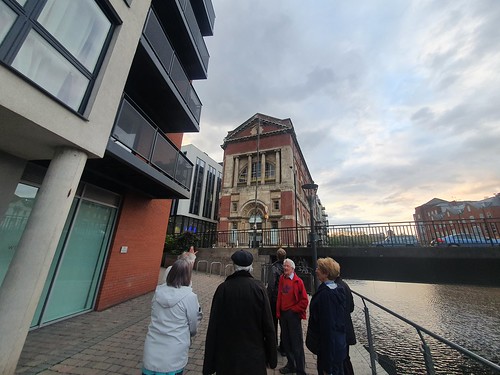 My moaning about the drinks served in Bristol to one side, the highlight of the day was for three of the NEC to be given a tour of Bristol’s history by the local LDWA group, which I know Julie, Stuart and I all enjoyed. I’ve been to Bristol several times, but was shown new elements of the city’s heritage that I hadn’t been aware of and we very much appreciated the tour. 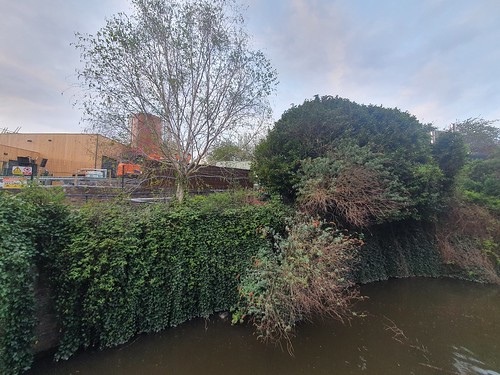 I wouldn’t have guessed that this is the former moat of the city’s castle. It has been rather repurposed since. 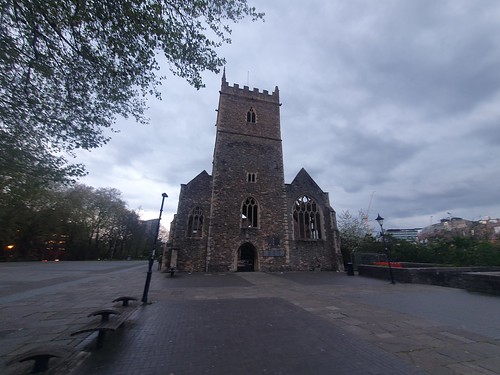 St. Peter’s Church, bombed during the Second World War and today left as a memorial.

I was aware that much of this area had been reworked, but a local member explained that the area to the north of the river on this map from 1920 has now been entirely swept away into becoming a park. The  bombed out church is visible on the map, just south of Peter St. 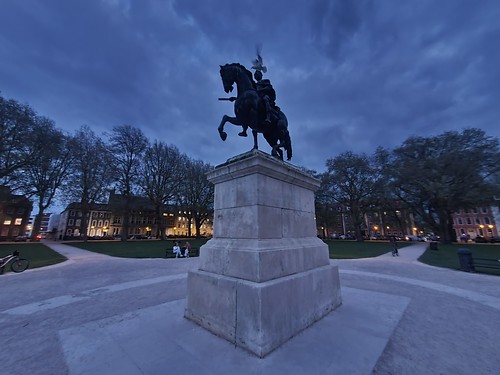 A seagull decided not to wait until I had taken this photo of the statue of King William III which has been in Queen Square since 1736. 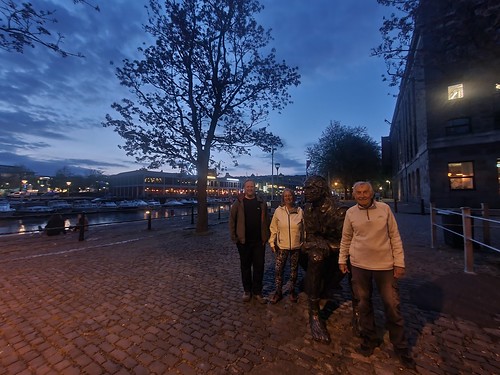 Some photo taking whilst there was just enough light. 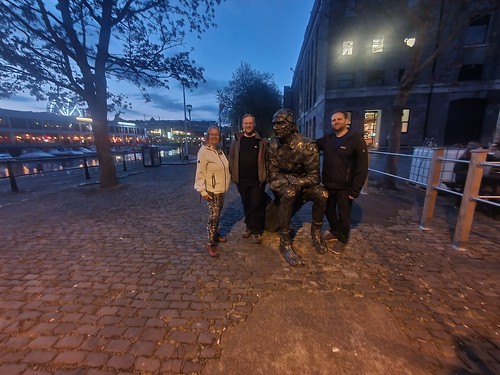 Julie, Stuart and myself. 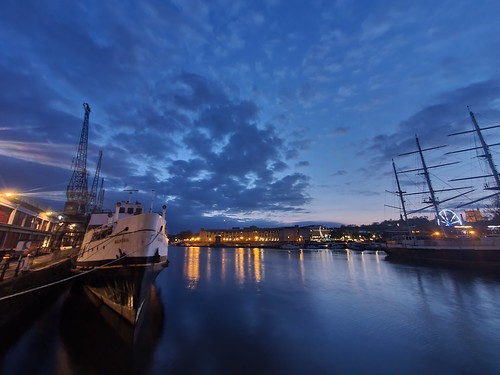 Beautiful Bristol at night. OK, it’s not quite as classy as God’s own city of Bath, but it’s not far behind. 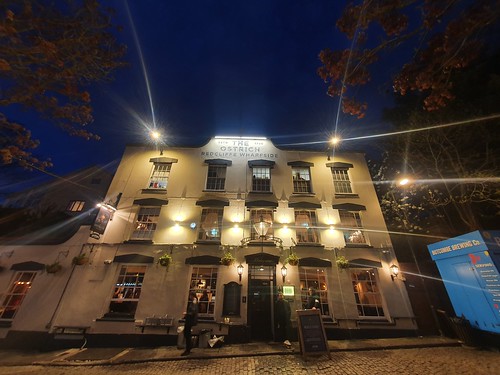 And a post-walk meal and snack at the Ostrich pub in the city, where I can recommend the Monster Munch. It’s a Butcombe Pub, which was a suitably local venue to visit when in the area. I walked back to the Novotel along the river, pleased to have had the opportunity to meet some fascinating members from the group and to have toured the city. This visit reminded me that I needed to come and spend a few more days in Bristol and the local area……